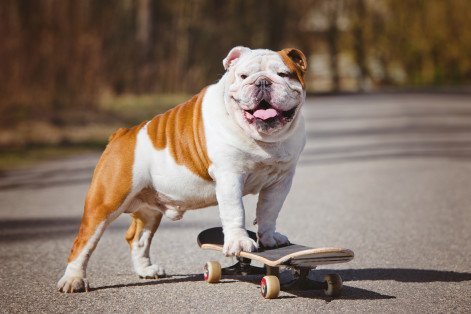 An English Bulldog dog standing on a skateboard.

Otto, a 3-year-old English Bulldog is a new world record holder! Hailing from Lima, Peru, this amazing little guy made the Guinness Book of World Records by travelling through the longest human tunnel as a dog skateboarder. Fetch! Pet Care salutes Otto and his owner/trainer on such an incredible win!

Click play and watch the level of sportsmanship this hefty pooch displays as he sails through the minimum 30-person human tunnel with relative ease and expertise:

Pretty amazing, right?! And lest you think that he just cruised his way to victory after a human push, notice how he takes off at :10 seconds and then how he uses his foot to push and regain his balance at :26 seconds. Actually, you can see this world-class athlete using his paws to balance the board and, presumably, control his speed all throughout the video. And his dismount at :33 seconds is the most professionally executed we’ve ever seen from a skateboarding English Bulldog! (RIP Tillman…you had a great run and we’ll forever cherish your memory, buddy!)

Otto attempted the record in Peru on November 12th in celebration of this year’s Guinness World Records Day. So far, his win has attracted no less than one million YouTube views and we imagine that Guinness’ page in his honor has probably had at least as many visitors as people clamor to learn more about this adorable English Bulldog and his pawsome accomplishment!

And speaking of clamoring, notice this pooch’s swag as he’s clearly exhausted from the win, but makes himself available for head scratches and kisses from his adoring fans. Most of those seen cheering him on were part of the 30 person long human tunnel that made his win possible, so shout out to everyone who helped make this English Bulldog the star that he was destined to be! We hear that Otto can also surf and skimboard, so don’t be surprised if you see him breaking other records again soon.

Do you know a particularly athletic English Bulldog? Have you ever seen anything like this from any other breed before? Be sure to tell us what you think about Otto’s win in the comments section below.