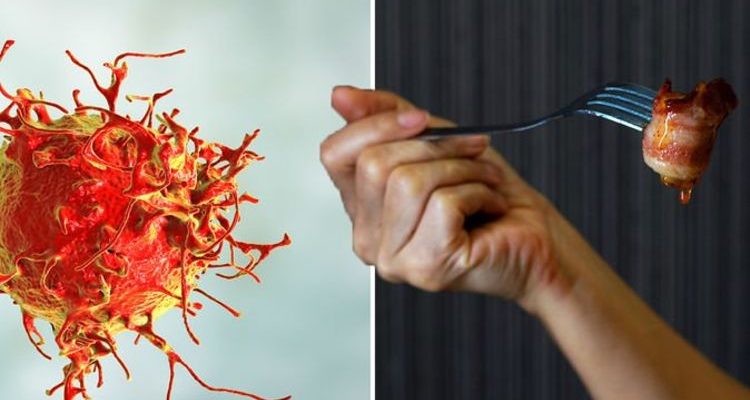 Cancer symptoms: Top 14 early signs to look out for

Cancer is a terrifying prospect for many reasons. One of the most unsettling is its indiscriminate impact: anyone can develop cancer, regardless of age or gender. However, research into the role lifestyle decisions play suggests you can modify your risk.

One of the worst risk factors for cancer is processed meat consumption, warns the WHO’s specialist cancer agency the IARC.

According to the cancer entity, processed meat has been classified in the same category as causes of cancer such as tobacco smoking and asbestos, but this does not mean that they are all equally dangerous.

The IARC classifications describe the strength of the scientific evidence about an agent being a cause of cancer, rather than assessing the level of risk.

The assessment is based on the conclusions of a number of studies.

An analysis of data from 10 studies estimated that every 50 gram portion of processed meat eaten daily increases the risk of colorectal cancer by about 18 percent.

Colorectal cancer starts in the colon or the rectum. These cancers can also be called colon cancer or rectal cancer, depending on where they start.

Although it is hard find specific data on the prevalence of the problem, according to estimates by the Global Burden of Disease Project – an independent academic research organisation – about 34,000 cancer deaths per year worldwide are attributable to diets high in processed meat.

Processed meat is any meat that has been treated to preserve it and/or add flavour – for example, bacon, salami, sausages, canned meat or chicken nuggets. And a portion is about two sausages or three slices of ham.

The Government recommends that people eating more than 90 grams of red and processed meat a day should reduce it to 70 grams or less.

Seventy grams is the cooked weight. This is about the same as two sausages.

Conversely, some foods have been shown to reduce the risk of developing cancer.

Eating lots of fibre reduces your risk of bowel cancer, according to Cancer Research UK.

According to the charity, eating too little fibre causes around 30 in 100 bowel cancer cases (around 30 percent) in the UK.

“You can boost the fibre in your diet by choosing wholegrain versions of foods,” advises the charity.

To get more fibre in your diet try:

You should also try to keep a healthy weight by being physically active and eating a healthy, balanced diet.

There is strong evidence which shows that people who are more physically active have a lower risk of bowel cancer.

According to the NHS, you should speak to a GP if you’ve noticed these changes and it’s lasted for three weeks or more: