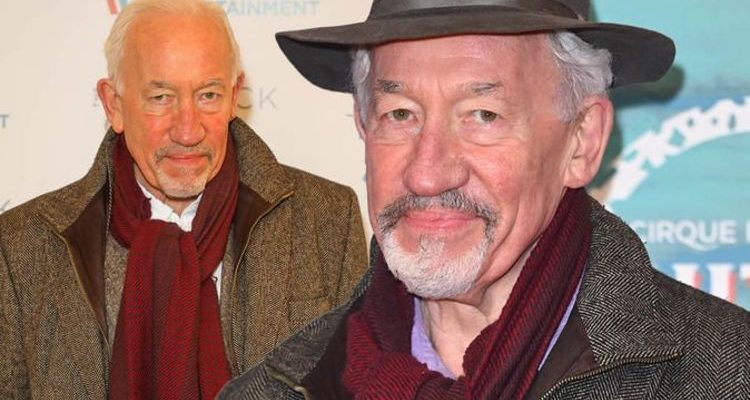 Narrating new ITV show Keeping Up with the Aristocrats tonight (Monday January, 17), Callow has also been keeping busy with roles in the newest Disney Marvel series Hawkeye, and Netflix hit show The Witcher. Despite suffering from a horrid stomach bug during the preview of his play The Man Jesus at the Lyric Theatre in Belfast back in 2013, the star’s hectic work schedule seems to never take a toll on his health, despite the actor being in his seventies. Yet although not seeming his true age, the star has confessed in the past that he realises his time left on this planet is “finite”.

When asked by the Radio Times back in 2017, what he sees when he looks into the mirror, Callow replied: “I see a nearly 70-year-old man in good health and vigour, but with a finite amount of time left on this planet.

“Realistically, so many of my friends are dying and I don’t want to go on and on if it means taking vast numbers of prescription drugs.”

In light of the admittance that he would rather not use mounds of drugs to keep him in good health, Callow went on to say that he and husband Sebastian Fox, who is considerably younger than the actor, have not had a discussion about his ageing.

The star added: “I’ve lived! Not to have lived would have been the worst thing.

“Though the subject is given more vivid importance because my husband Seb is 35 [now approx 40 years old]. We haven’t had that conversation actually, but I suppose we shall.”

Confessing that he and Fox have very “different energies,” Callow still tries to play his part, explaining that he is “always up before him [Fox], doing whatever needs to be done.”

With a father who “drank himself to death” at the age of 55, but a mother, grandmother and great grandmother, who lived into their 90s Callow explained to the Daily Mail back in 2010 that it is “the men who have peeled off a bit earlier” within his family.

With this in mind, the star admitted to taking a combination of vitamins and medication in order to keep conditions such as high cholesterol at bay.

In response to the question “pop any pills?” Callow replied: “All sorts of things: vitamin C for energy, vitamin D to boost my immune system, cod liver oil and various omega oils for my joints. I also take statins for cholesterol.”

With most of the above not being classed as “prescription drugs,” it seems the star is still keeping healthy by his own terms.

The actor went on to admit that in the 1990s he found out that he was “allergic to cheese” despite absolutely loving the dairy product, and due to his metabolism, he always has to be “very careful” about what he eats, otherwise he will put on weight. Not helped by his “greedy” nature and weakness for “eating large portions”.

BBC Good Food explains that when you reach the age of 60 and over, vitamins become vital for your health, and should be incorporated into your diet more and more.

The website explains that due to various physiological and psychological changes, your nutritional requirements often change. This is not helped by the long-term use of prescription drugs, as this can reduce the absorption of certain nutrients.

Many older individuals may also find that as they age their appetite decreases, but the need for vitamins and minerals stays the same, or in some cases even increases, meaning the food people in this age range eat, becomes even more important.

As a result of this, older people are encouraged to eat a diet that contains vitamin D rich foods such as eggs or oily fish. Those over the age of 65 are also encouraged to take a daily 10 microgram supplement of the vitamin.

Nutritionist Kerry Torrens recommends that individuals should be eating a diet containing plenty of fibre and vitamin B12 such as fruit, vegetables, wholegrains, meat and fortified breakfast cereals in order to combat common problems such as constipation and fatigue.

As well as maintaining a good diet in your older age, exercise is also critical. The NHS adds that this is even more important for adults aged 65 and over as on average, they spend 10 hours or more each day sitting or lying down.

When asked “can you run up the stairs?” Callow gave an honest answer. He said: “Yes, my house has two flights of stairs, which I’m always running up and down.

“I’ve got two large dogs that help to keep me fit, too. That said, I was born with subluxated knees – my kneecaps don’t fit into the joints properly – so I need physiotherapy to strengthen the muscles.”

The NHS continues to state that there is “strong evidence” to suggest that people who are active have a lower risk of contracting serious conditions such as heart disease, stroke, type 2 diabetes, depression, dementia and some cancers.

The medical body recommends that individuals should aim to do at least 150 minutes of moderate activity every week. This can be broken down into 30 minutes at least five days a week. Examples of moderate-intensity aerobic activities include:

Previous: The popular food that ’causes’ cancer – responsible for thousands of cancer deaths a year
Next: This common weight training technique could do more harm than good
Pet Care News