Former South African president Nelson Mandela once emphasized that the war against AIDS could not be won without confronting the country’s tuberculosis epidemic. For the last 16 years, a group of Yale researchers in the Yale AIDS Program has been doing just that through their involvement in the Tugela Ferry Care and Research Collaboration (TF CARES),  an international non-governmental organization committed to improving prevention, care, and treatment for adults and children with HIV/AIDS and tuberculosis through clinical care, research and capacity building in Tugela Ferry, South Africa.

Currently, South Africa has the largest number of people living with HIV in the world and is also experiencing a dramatically expanded tuberculosis epidemic. These two epidemics are tightly linked, as HIV increases TB risk and disease, and TB is the leading cause of death among people living with HIV. In 2002, the Yale AIDS Program began addressing the twin epidemics in KwaZuluNatal, the country’s most populous and heavily burdened province.

The program—led by Yale professor Dr. Gerald Friedland, professor emeritus of medicine (infectious diseases), epidemiology, and public health, and South Africa colleagues—is based on a strategy of integrated TB/HIV diagnosis, care, and treatment intended to improve the outcomes of both diseases. The strategy was first implemented in Durban, the largest city in KwaZuluNatal and the third largest in South Africa.

“We were among the first to conclusively demonstrate the feasibility, safety, and lifesaving value of integrating TB and HIV diagnosis and treatment, reducing mortality among co-infected patients by 55 percent,” said Friedland. Based on the success of this approach, the World Health Organization made TB/HIV integration its globally recommended strategy for addressing the twin epidemics.

After this initial success, the researchers expanded their work to one of the poorest rural areas of KwaZuluNatal: the Msinga Subdistrict and town of Tugela Ferry, an area home to nearly 200,000 traditional Zulu people where TB and HIV rates rank among the highest in the world. In partnership with Philanjaloa, a local NGO, and South African colleague Dr. Tony Moll, clinical manager at the Church of Scotland Hospital (COSH) within the South African Department of Health, the researchers have worked on combating the intertwined epidemics in the remote rural setting ever since.

Due to the team’s rapid success, Tugela Ferry was chosen as the first site in the country for the roll out of the South African National antiretroviral therapy program in 2004.

Moll recalled, “As a clinician in Tugela Ferry with more than 30 years experience, I had witnessed first-hand the devastation these epidemics have had on individuals and our community, and the miraculous benefit of newly available antiretroviral therapy.”

Unfortunately, when the Yale and South African researchers analyzed the causes of death among those who died during their research, they discovered that 60 percent of the deaths were attributable to multiple drug resistant (MDR) or extensively drug resistant tuberculosis (XDR TB). The latter strain, had only been recently identified and was resistant to the most potent first- and second-line TB drugs, making it extraordinarily dangerous, said Friedland. The recognition of XDR TB in the KwaZuluNatal patients led the Yale, U.S., and South African researchers to undertake a comprehensive epidemiologic and microbiologic prevalence study, which, according to Friedland, “uncovered a previously unrecognized underlying disastrous drug-resistant TB epidemic in South Africa.”

“We were astonished and dismayed to learn that 40 percent of new TB patients had drug resistant TB, almost all were HIV co-infected, and among them 25 percent had XDR TB,” Friedland said, noting that the mortality rate for these patients was close to 90 percent. 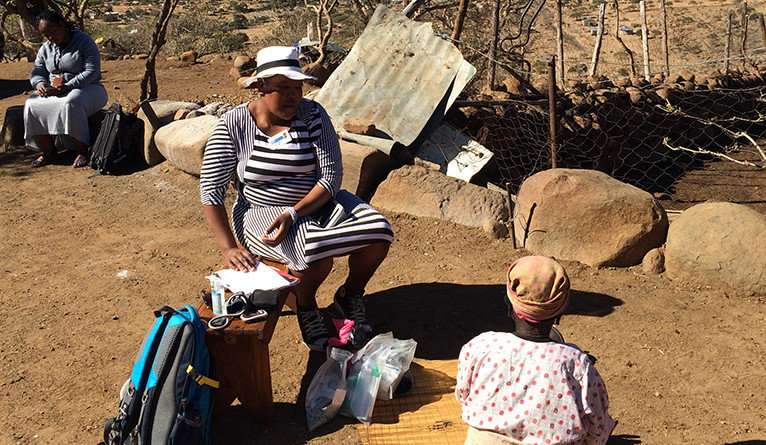 “Our group’s findings received widespread international attention and publicity in both the lay media and medical literature and have called attention to the consequences of decades of neglect in tuberculosis diagnosis, drug development and treatment, and the amplifying effect of HIV on TB incidence and prevalence,”  said Friedland, adding that “the epidemics of drug resistant tuberculosis and HIV were not only the result of biologic factors, but of powerful social determinants including the consequences of colonialism and apartheid, underlying poverty, and accompanying severe limitations in health infrastructure.” Added to these factors, he noted, was the absence of strategies to address TB and HIV co-infection, particularly in settings of high TB and HIV prevalence such as rural sub-Saharan Africa.

Having helped uncover this “perfect storm,” as Friedland describes it, and joined by Yale’s Dr. Sheela Shenoi, assistant professor of medicine (AIDS), the team shifted its focus to characterizing in more detail the consequences of TB and XDR TB and HIV, and to developing, testing and implementing practical measures to prevent and ameliorate the impact of the intertwined TB and HIV diseases. Currently, under Shenoi’s leadership, the team’s work focuses on innovative community-based strategies to accomplish this goal.

Shenoi said, “We learned that late presentation to care resulted in ongoing transmission of both diseases and that efforts in the community, not just health care facilities, was essential  to reversing the epidemics.”

In recent years, Yale’s involvement in disease prevention and treatment in South Africa has continued to rise steadily to include other Yale faculty in the Section of Infectious Diseases and AIDS program and the Yale School of Public Health, along with approximately one to two dozen students and trainees annually. Over the past decade, more than 20,000 community members have been started on antiretroviral therapy, and the number of new cases of XDR TB annually has declined from more than 100 to fewer than 10 per year.

According to Friedland and Shenoi, “This collaborative program has carried out important research and has also enriched the care, treatment, and lives of countless individuals and the community in this impoverished and highly affected epidemic region.” Trainees from the United States, career physicians, and faculty have participated in an ongoing continuing clinical care and education program with South African colleagues, consisting of bedside training, direct patient care, and twice-weekly formal educational sessions with the entire South African medical staff of TF CARES.  Joined by Yale faculty, the organization’s staff have contributed in an ongoing and significant manner to training for clinicians in Tugela Ferry, thereby assisting in building capacity for quality and effective clinical care and treatment. In exchange, this experience has directed many United States trainees toward careers in global health.

One of the trainees, Dr. Sarah Norton, a member of Shenoi’s team who conducted her Doris Duke research fellowship in Tugela Ferry, said: “The breadth of impact that Doctor Moll has had on the Tugela Ferry (and COSH) community is illustrated by just how far I could travel out town and encounter people who still knew him by name and could relate a clinical encounter or medical circumstance where he had assisted in some way. This happened in Greytown, Durban, and beyond.”

Moll not only helped in clinical settings as varied as the CDC/HIV clinic, the OB/GYN ward and the OR, but he was constantly (and persistently) raising research questions necessitating rigorous clinical research and seeking resources to optimize health outcomes and preventative health interventions.”

Friedland and Shenoi’s work with their South African colleagues has both influenced South African Department of Health policy and practice and resulted in more than 50 published articles in high-impact medical journals, as well as more than 100 presentations at various national and international meetings and conferences.