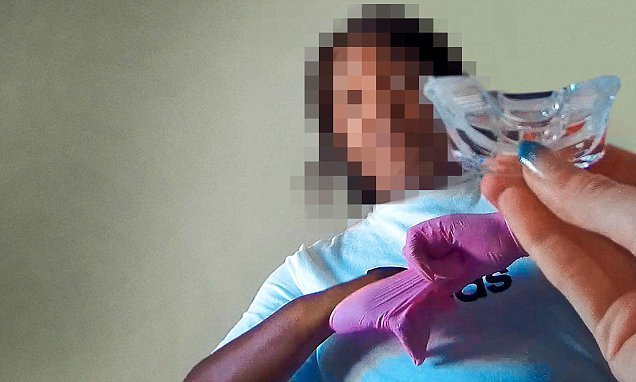 The cramped room in the back of a neighbourhood barber shop close to Chingford Station isn’t where I expected to find a clinic promising a gleaming ‘Hollywood smile’ makeover. But according to the Essex Smiles website, this is one of 18 ‘studios’ across the South East offering teeth whitening – costing from £50 – and DIY kits endorsed on social media by a host of actors, actresses and reality TV stars.

‘I’m here for my appointment,’ I explain to a woman I assumed was a therapist as I arrive.

I’m nervous I tell her, blaming my childhood fear of the dentist.

What I don’t mention is that I am a journalist – and I know full well that legally a dental professional has to carry out teeth- whitening treatment. 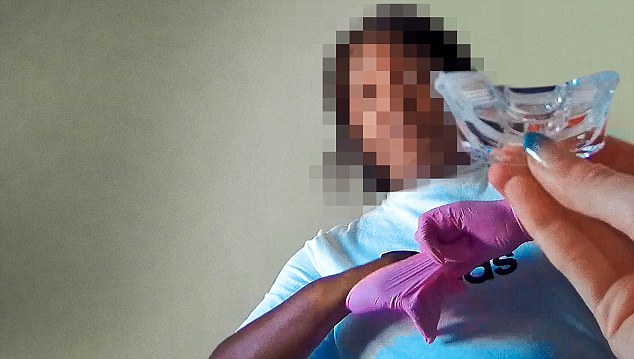 Moment of truth: A worker at an Essex Smiles clinic gloves up as Eve prepares to insert the mouthguard filled with gel The company had come under fire after the owner of their Northampton branch (pictured) was prosecuted and fined £4,500 by the General Dental Council (GDC) for offering illegal whitening in March of this year

I came across Essex Smiles while researching the surging popularity of teeth-whitening treatments, products and clinics in recent years, a trend driven largely by advertising on social media.

The company, whose promotional material features EastEnders actor and I’m a Celebrity… Get Me Out Of Here winner Joe Swash, and The Only Way Is Essex star Joey Essex among others, had come under fire after the owner of their Northampton branch was prosecuted and fined £4,500 by the General Dental Council (GDC) for offering illegal whitening in March of this year.

According to the GDC – the UK regulator of dental services – ‘the legal position on teeth whitening is very clear: the treatment can only be performed by a dentist, dental therapist, dental hygienist or clinical dental technician.

‘Illegal tooth whitening represents a real risk to the public as those who carry it out are neither qualified to assess a patient’s suitability for the treatment nor are they able to intervene should an emergency arise’.

Photographs available on Essex Smiles’ Facebook page show people having what seems to be a whitening procedure. A device on a bendable arm shines blue UV light into the mouth. Appointments are also advertised on Facebook.

I had approached the company’s head office, telling them I worked for The Mail on Sunday. They denied they offered treatment and claimed they only sold products – which legally they are allowed to do. Their spokesman said: ‘None of our shops have dentist chairs [and it is] wholly false… to suggest that we are in some way undertaking illegal dentistry practice.’

Concerned by the contradiction between what I was being told and the impression I got from their social media, I posed as a would-be customer and made an appointment.

Once signed in at the Chingford branch, I was ushered into a room, and seated in a high-backed chair.

Another customer was already in there, UV lamp in place.

I was handed a plastic mouthguard dripping with a clear gel. The staff member assured me I could swallow the ‘100 per cent natural’ solution if I needed to and told me where to position my teeth in the mouthguard.

The mixture, I was told, contained only aloe vera, sodium bicarbonate (a natural tooth whitener found in toothpaste) and coconut oil.

According to the company’s website, ingredients in several of their whitening products also include sodium carbonate peroxide, a type of bleach used for whitening by dentists. The whitening formula is supposedly activated by the lamp and the whole procedure can take up to an hour, depending on your desired brightness. I make my excuses – claiming an acute attack of nerves – and leave.

At the second branch I visit, I decided to give it a go.

She instructed me not to brush my teeth for 12 hours after the treatment, nor drink tea, coffee or red wine, and take other drinks through a straw.

Protective dark goggles were provided to shield my eyes from the harmful UV rays. Once the lamp was in position, I was told to keep my head still and smile.

After she fired-up the lamp, she disappeared down the stairs.

The gel tasted like super-strength toothpaste, trickling down to the back of my throat as I struggled to breathe through my nose. The intense heat of the light blazed through my front teeth and the icy mint tingled my top lip resulting in an uncomfortable feeling across my top and bottom front teeth.

Dental professionals offer a similar procedure – including both a whitening solution and UV lamp. Dentists supply the exact quantity of whitening product in order not to cause adverse reactions of the gums and surrounding tissue.

Crucially, dental professionals may also detect gum disease or oral health problems that may worsen when in contact with teeth-whitening products. Studies from 2012 and 2016 published in the Journal of Open Dentistry show LED and laser-activated teeth-whitening treatments increase sensitivity in the teeth and the gums, with some evidence of ‘demineralisation’ of teeth, increasing tooth decay risk.

Scott McGlynn, a podcast presenter from Cardiff, suffered crippling mouth pain and tooth sensitivity after illegal whitening at a different High Street chain to Essex Smiles. The 31-year-old had the hour-long treatment last year after seeing it advertised on a reality TV star’s Instagram page.

Scott, who paid £60, said: ‘I had shooting pains in my teeth and gums for three days. I couldn’t drink water, my teeth were too sensitive. The lamp was so hot I think it damaged my enamel – and it had no effect on the colour of my teeth.’

Many cosmetic teeth-whitening companies – including Essex Smiles – also sell DIY at-home whitening kits via their website. Some of these kits contain bleach, hydrogen peroxide and carbamide peroxide, which can only be sold legally to the public in strength doses below 0.1 per cent. Dentists or dental practitioners can use the chemical in doses of up to six per cent.

Essex Smiles state on their website that all products are within the legal limit of 0.1 per cent hydrogen peroxide, meaning they can be sold legally for use at home. 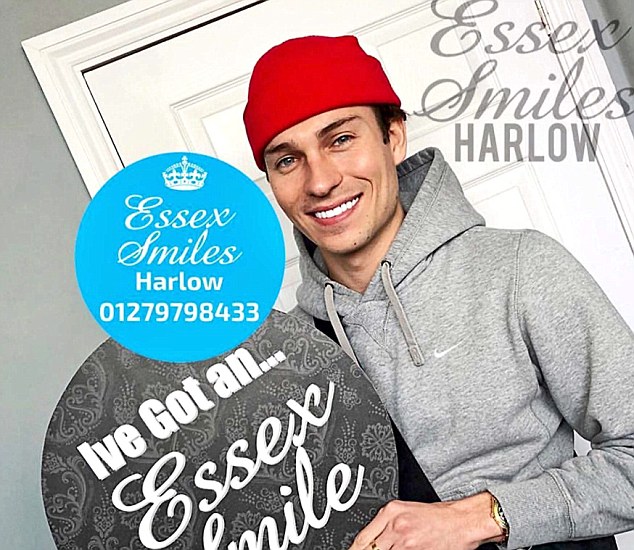 Instagram favourite Hi-Smile contains pomegranate, chamomile, sodium chlorite and sodium bicarbonate (found in whitening toothpastes) which are said to work in conjunction with a hand-held LED lamp to whiten and reduce tooth sensitivity.

While the GDC regulates clinics offering teeth-whitening services, it is Trading Standards that oversees products sold for customers’ own use, usually at home.

In a statement, Trading Standards said: ‘There have been some instances where consumers have been harmed by dangerously strong chemical levels in teeth-whitening kits. Our advice is to be cautious when buying online and seek advice from a dentist.’

Professor Damien Walmsley, Dentist and scientific adviser to the British Dental Association, said: ‘Many of these firms are peddling snake oil. It doesn’t matter how much they dress it up in pseudo-science, they can’t deliver the pearly whites they promise.’

After visiting the clinics and speaking to the experts my conclusion is that the surest way to successfully brighten your teeth is to have teeth bleaching via a registered dentist or dental professional. Opting for at-home kits or in-store procedure may, at best, scrub away stains for 24 hours – which can also achieved with a good toothpaste. At worst, chemicals can leave gums blistered and burned and teeth achingly sensitive. The most likely scenario is no change in whiteness whatsoever, despite having parted with a hefty sum of cash.

Back in Ruislip, I lasted five minutes under the light before deciding my tastebuds and mouth could take no more. I was still charged the full price of £60 – how’s that for a kick in the teeth?

Essex Smiles told the MoS that they merely provided safe teeth-whitening products for customers to self-administer and a place to do it in. Their staff, they said, did not offer customers in-store teeth whitening and instructions were limited to how to use their products.

In a statement the company said: ‘Essex Smiles provides shops around the country that sell tried and tested teeth-whitening products approved by Trading Standards.’