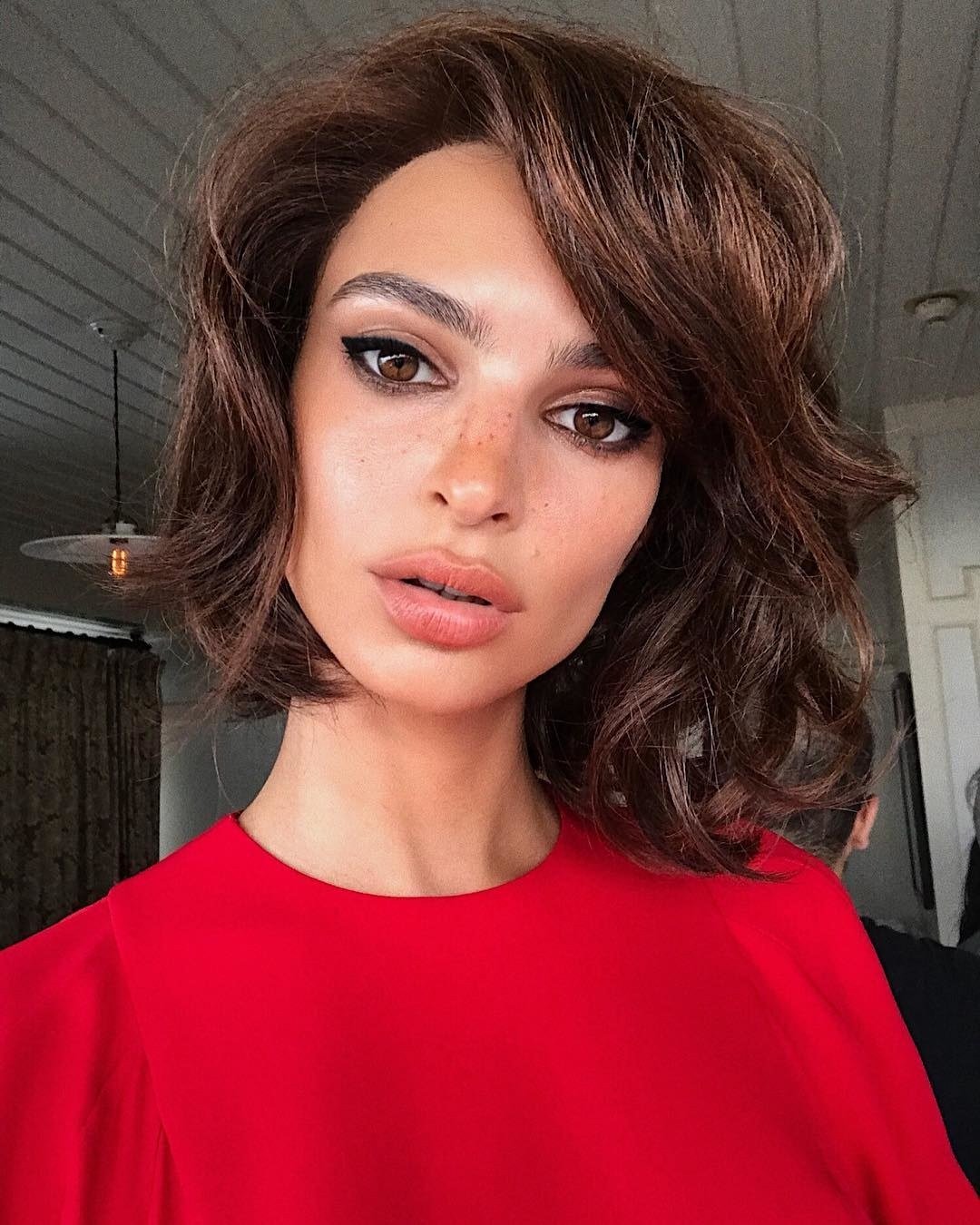 This summer, it's been impossible to scroll through Instagram without seeing yet another chin-length bob. We've seen plenty of famous faces get a shoulder-clearing chop for the warmer months this year, and now Emily Ratajkowski has jumped on the bob bandwagon. She debuted her dramatically shortened hair on Instagram on Friday, styled in bouncy curls with makeup done by Hung Vanngo. The voluminous style gave the look a more retro feel than the sleek, blunt, futuristic styles seen on stars like Dua Lipa and Bella Hadid recently.

In the selfie, Ratajkowski wears a deep side part in her chestnut-colored hair, which falls in loose curls around her face that stop just below her chin. Her makeup is dewy and sheer enough to let her freckles shine through, and, with her understated graphic cat-eye flick of black liner and bright red crewneck top, she evokes major off-duty Jackie O vibes.

"Who tho?" she captioned the pic, likely a follow-up to the Instagram she posted mere minutes before which shows Ratajkowski wearing nothing but a towel while sitting in front of a mirror and getting photographed by model Jordan Barrett. The earlier photograph was captioned "Who is she?" and Barrett's handle was tagged. She also added "Coming soon," implying that the photos — and her dramatic new look — are part of an upcoming secret project.

Sadly, as gorgeous as Ratajkowski's new hairstyle is, it doesn't appear to be a permanent switch-up. Makeup artist Hung Vanngo reposted her selfie on his own account but implied in the caption that the bob was only temporary and the result of a (very convincing) wig. "Wigged out!!!. Coming soon…" he wrote.

This isn't the first time Ratajkowski has used a wig to try on a super-short hairstyle for size. Earlier this year, before attending the 2018 Met Gala (with her long hair on full display), she posted a photo on Instagram in which she sported a closely cropped pixie cut, assuring her followers that it was definitely a wig but, again, teasing that it might make a return in a future project. All that's left for us to do, apparently, is wait for the inevitable "Untitled Emily Ratajkowski Short Hair Project" to finally be released.

Previous: Risk of Death Not Up in T2DM When Risk Factors Within Target
Next: 417,000 Augusta University Health patient records breached nearly one year ago
Related posts
Pet Care News