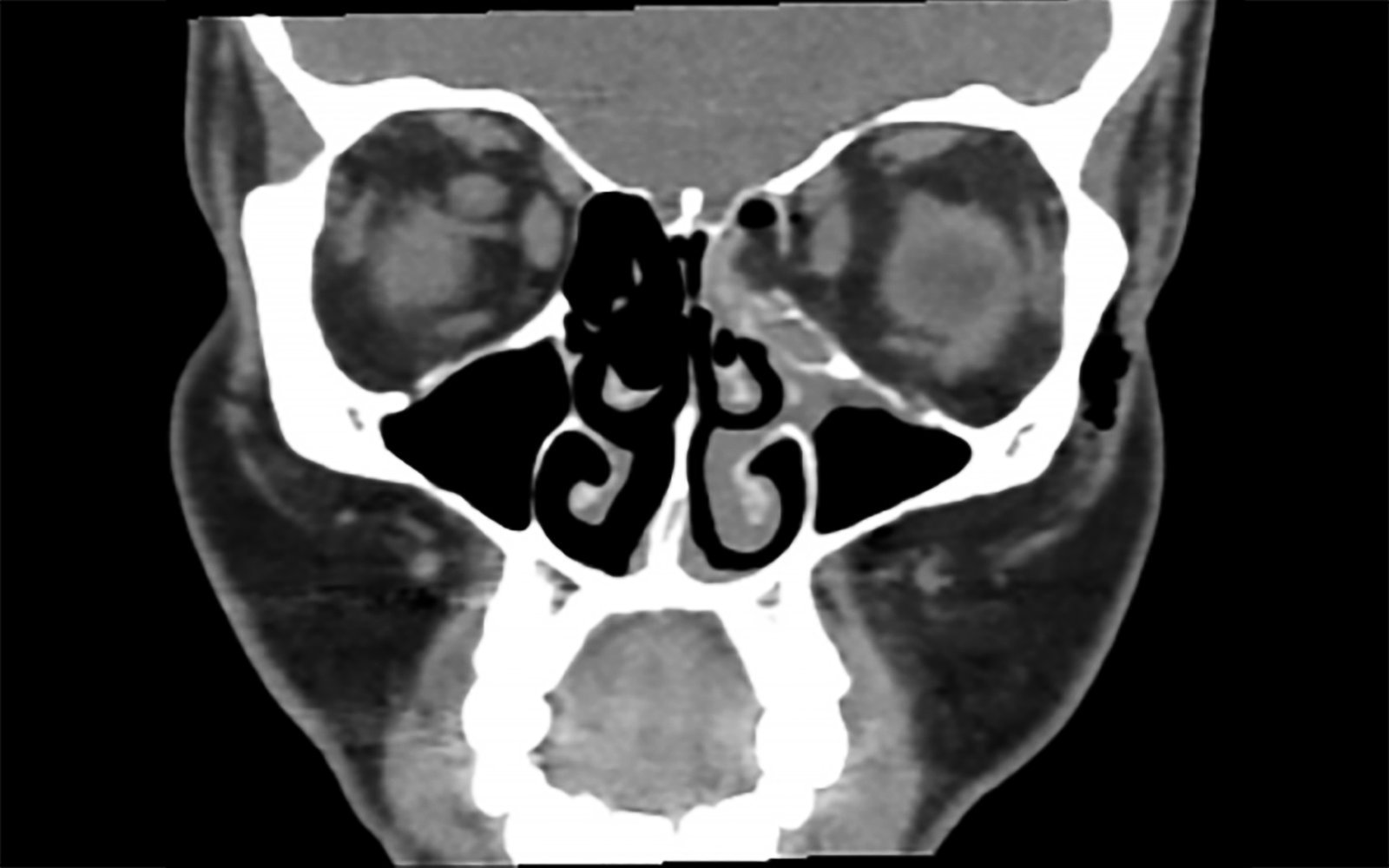 A British woman who blew her nose a bit too hard didn't just end up with a snot-filled tissue — she also fractured a bone in her left eye socket, according to a new report of her case.

That's right — the sheer force of blowing her nose led to an "orbital blowout fracture," or a break in the thin bone that forms the floor of the eye socket.

The incident took place when the 36-year-old woman was at work, according to the case report, which was published online June 28 in the journal BMJ Case Reports. Shortly after forcefully blowing her nose, the woman temporarily lost vision in both eyes. Then, 2 hours later, her left nostril suddenly started to bleed, and she developed swelling around her left eye. After another few hours of vision problems and stabbing pain on the left side of her head and neck, she went to the emergency room. [27 Oddest Medical Cases]

A CT scan of the bones in her face revealed a fracture in her left eye socket, according to the report. Specifically, she had a break in the lamina papyracea, one of the bones surrounding the eye.

While eye-socket fractures aren't rare, they're caused much more commonly by blunt-force trauma, such as when someone gets punched in the eye or is hit by a ball, said case report lead author Dr. Sam Myers, a surgeon at North Middlesex University Hospital in London who treated the woman.

Indeed, one of the bones in the floor of the eye socket is thin and can fracture with such blunt-force injuries, Myers told Live Science. But making the nose-blowing case even more curious, this woman actually fractured a neighboring bone, which is a bit thicker and harder to break, he said.

People can create quite a lot of force within their nostrils when blowing their noses, Myers said, but it's very rare for this to create enough force to fracture an eye socket.

Myers said he'd never heard of a person breaking an eye socket from blowing his or her nose. Everyone blows their nose, but they don't think they can blow out their eye in the process, he said.

What was different this time?

But there may have been some reasons why this bizarre incident occurred. For one thing, the woman had a cold during the week of the incident and had been blowing her nose more frequently, Myers said. And the way she blew her nose could've also played a role: The woman tended to close off one nostril and then blow forcefully, which almost doubles the pressure in the sinuses as it forces all of the pressure out through the remaining open nostril, instead of both nostrils, he said. [Ah-CHOO! 7 Tickling Facts About Sneezing]

In addition, the woman was a pack-a-day smoker, according to the report.

Smoking may have played a part in the injury, Myers said. Smoking changes the pressures in a person's sinuses, which are located next to the eye sockets, and this may have made her more prone to fracture, he said.

Another possible explanation is that the woman may have had a predisposition toweak bones that made the bones around her eye and nasal passageways more vulnerable to changes in pressure, Myers said.

As a result, the force the woman generated by blowing her nose may have been equal to the force of a punch, thus leading the eye socket to fracture, Myers said. What's more, the fracture allowed air to become trapped in places where it does not belong, such as under the skin and within tissues. This is known as "orbital emphysema," and it usually goes away on its own, he said.

The woman ended up spending the night in the hospital because of the fracture. She was given painkillers and was prescribed antibiotics to prevent infection.

The last time Myers saw the woman, she was doing very well. Her vision was not permanently affected by the fracture, and she did not need surgery to repair the break, he said.

From time to time, the woman still has pain on the left side of her head, which should go away eventually as she continues to heal, Myers said. But he was pleased to report that the woman has given up smoking — and likely will be blowing her nose more gently in the future.