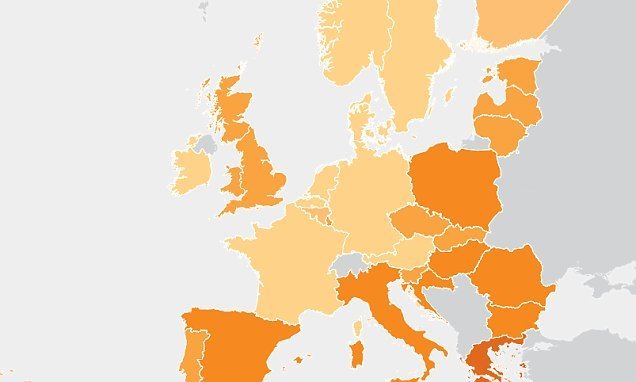 The fat kids of Europe: 35% of 11 year old boys are obese in 9 European countries, reveals EU-funded map (so how does the UK rank?)

More than 35 per cent of 11 year old boys are obese or overweight in Greece and Malta.

The rate is higher than 31 per cent in Bulgaria, Romania, Hungary, Croatia, Poland, Italy and Spain.

A quarter of 11 year old boys in the UK are obese, similar to Portugal, Slovenia, Slovakia, Latvia, Estonia and Finland.

EU-funded researchers created a map to show the worrying rates of childhood obesity across the continent.

Rates of obesity in boys are highest in Greece, where more than a third (39 per cent) of 11 year olds are either obese or overweight.

Ireland, Denmark and the Netherlands have the lowest rates, ranging from between 13 and 15 per cent.

Obesity in childhood can light the fuse for a lifetime of deadly ailments, including type 2 diabetes, heart disease and cancer. 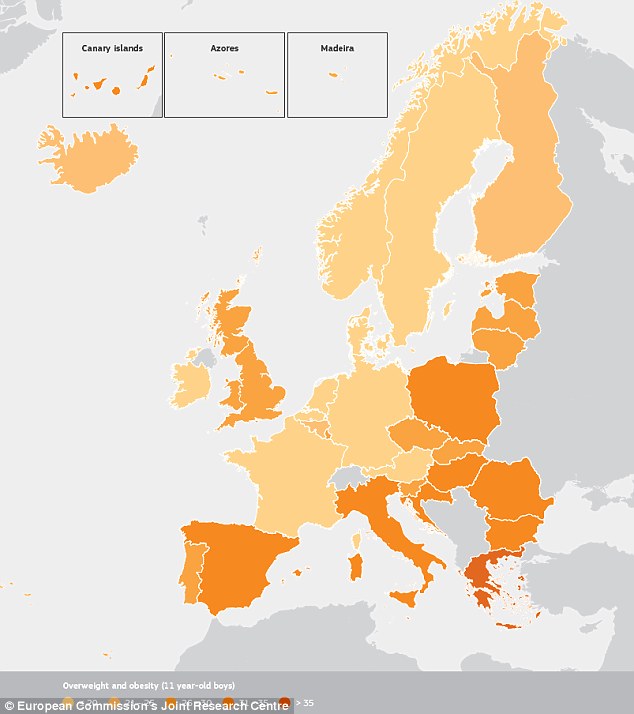 Rates of obesity in boys are highest in Greece, where more than a third of 11 year olds are either obese or overweight

The map shows data for all 28 EU members, including the UK, whose childhood obesity epidemic has repeatedly been laid bare through official data.

And Norway and Iceland – both members of the European Free Trade Association – were included in the five colour-scaled map.

The darkest orange colour is given to the countries where more than 35 per cent of 11 year boys are either obese or overweight.

In contrast, the lightest orange colour is given to the nations where less than 20 per cent of 11 year old boys are obese or overweight.

In between, there are three separate brackets for countries to fall under, highlighted with different shades of orange.

The European Commission’s Joint Research Centre – a branch of the EU – released the map, which uses data from the World Health Organization.

Its latest report, released last week, is titled ‘mapping and zooming in on childhood overweight and obesity’.

IS BRITAIN THE FAT MAN OF EUROPE?

Britain was shamed as the obesity capital of the EU last November.

This country has the highest rates in the bloc, with nearly 30 per cent of women and just under 27 per cent of men overweight.

Other health figures are also worrying, showing we are second worst at exercising and have one of the highest rates of heavy drinkers.

Britons are also near the top of an international table for having dangerously high cholesterol levels.

The statistics follow a warning that it has become normal to be vastly overweight, with this country following the lead of the US, the world’s most obese nation.

The EU launched a major drive in 2014, when the data corresponds to, to tackle the worrying rates of childhood obesity.

Its Action Plan on Childhood Obesity was hoped to halt the rise in overweight and obesity in children and young people by 2020.

The new map comes after official figures revealed in May that more than 22,000 children leave primary school severely obese.

They are twice as likely to be dangerously obese aged 11 as when they started in reception class aged four.

This is despite hundreds of millions being poured into healthier school meals, new PE equipment and extra sports coaches.

The scheme records the weight and height of school starters and again when they are in Year 6.

Campaigners said the statistics were an ‘indictment’ of successive governments’ failure to tackle the problem of obesity in children.

According to NHS figures, just over a third – about 170,000 – of the half a million children who left primary school last year were overweight to some degree.

Previous: This Woman Broke a Bone in Her Eye Socket by Blowing Her Nose Too Hard
Next: Health Highlights: July 9, 2018
Related posts
Pet Care News