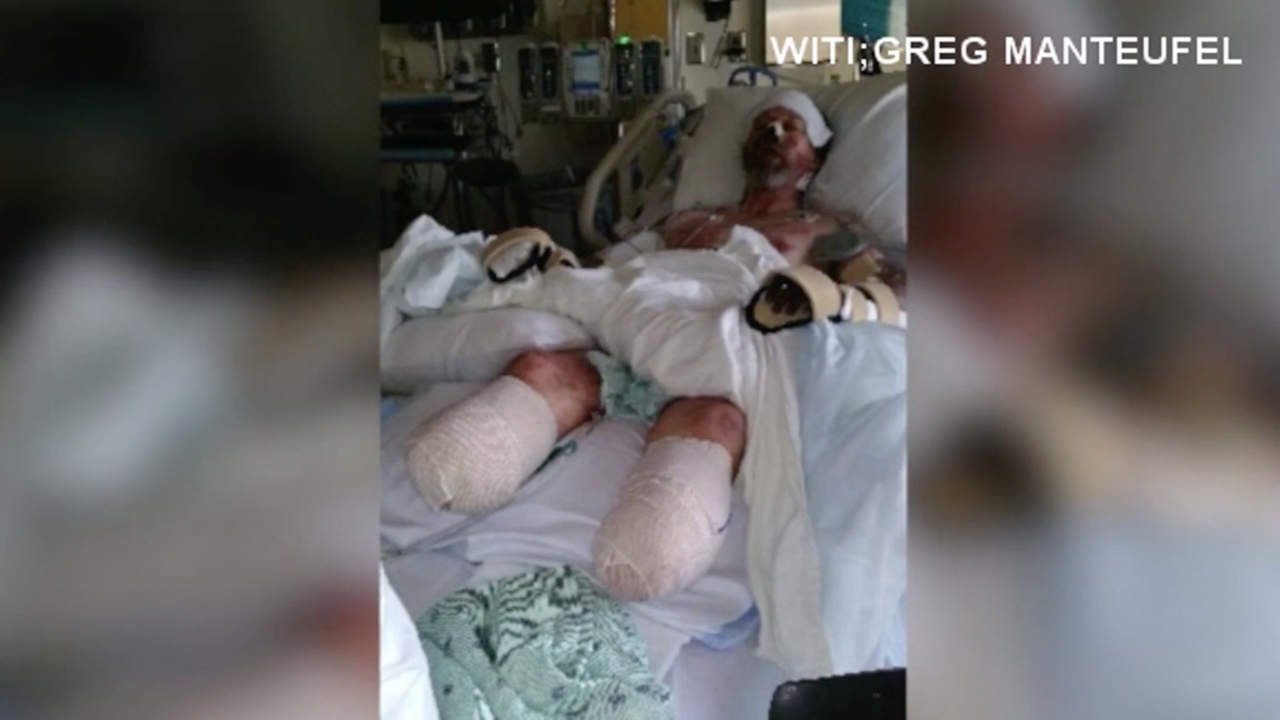 Most dog owners welcome a happy lick from their pups now and then. But a Wisconsin man is making headlines this week after a lick from a dog had life-threatening consequences.

Greg Manteufel started feeling ill on June 27, according to a GoFundMe page raising money for his recovery. Initially, he and his wife Dawn thought he must have the flu, she told ABC7. But hours later, he was starting to go into septic shock and was rushed to the hospital, where doctors discovered he had contracted the bacteria capnocytophaga. Manteufel ultimately had both legs amputated up through his kneecaps and had surgery to remove parts of both of his hands. He will also need surgery on his nose, according to the GoFundMe page.

The dog lover had been around eight pups when he became ill, People reported. Capnocytophaga is normal in dogs and cats and doesn’t cause symptoms in animals. But when transmitted to humans through animal saliva–usually via a bite–the bacteria can cause fever, diarrhea, vomiting, headaches, and progress to a blood infection in humans.

“It’s not very common, but when it occurs, it [can be] really bad,” Bruno Chomel, DVM, PhD, professor of zoonosis at the University of California Davis School of Veterinary Medicine, told Health in a prior interview.

While Manteufel’s experience is certainly frightening, don’t panic over every lick from your favorite furry friend. Most people who come in contact with capnocytophaga bacteria don’t get sick, according to the Centers for Disease Control and Prevention (CDC). You’re more likely to become infected if you have an underlying medical condition like cancer, diabetes, or HIV that impairs your immune system. It’s a good idea to talk to your doctor if you have one of these conditions about how to make sure you’re handling your pet safely, and of course, if you’ve been bitten by your pet, seek medical attention. (Capnocytophaga infections can be treated with antibiotics.)

To get our top stories delivered to your inbox, sign up for the Healthy Living newsletter

Because capnocytophaga infections in humans are so rare, the U.S. doesn’t keep track of the number of cases, but one survey from the Netherlands estimated there is less than one case of capnocytophaga per 1 million people. However, about 30% of people who do get infected with capnocytophaga die.

Manteufel told doctors to do whatever surgeries they needed in order to keep him alive, his wife told ABC 11. “We can’t wrap our heads around it,” she said.

Tags: A, After, An, By, dog, from, His, infection, Legs, Lick, Life-Threatening, Lost, Man, This, turned