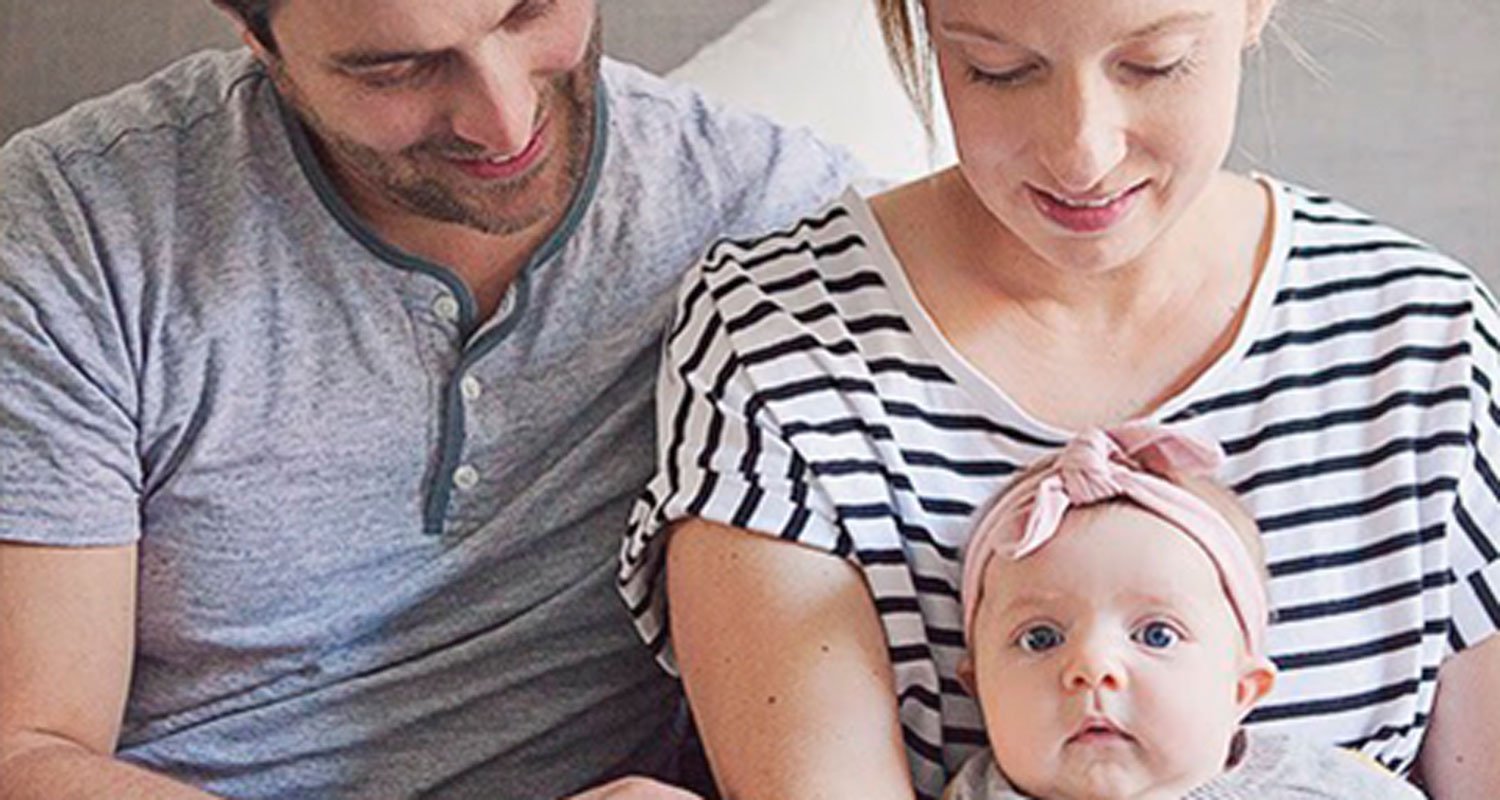 That is how my pregnancy was described by our doctor. It was so smooth. No morning sickness, my lifelong back pain got better, the only craving I had was fruit salad and I was so very happy.

The birth however was anything but boring. I was induced at 40 weeks, 48 hours in labor, 10cm dilated and two hours of pushing before I was told my baby girl was posterior and I needed to have an emergency cesarean. I didn’t mind. I figured every pregnancy and birth is different. You can’t win them all. I had my baby girl. We called her Mackenzie and she was pure perfection. I have never felt happier and more at peace with life. I went from a determined woman to a mum in my active wear and I couldn’t have been happier.

Thank you Royal Hospital for Women for making Mackenzie and I your homepage image. We feel privileged. Your hospital brought us so much joy. Mackenzie is a ⭐️ xx #mackenziesmemories

My husband, Jonathan, and I had ten blissful weeks with Mackenzie before our world was destroyed.

At ten weeks old I took Mackenzie to a lactation consultant because she was finishing each feed by crying. The consultant mentioned she seemed ‘floppy’. I instantly felt worried and made a doctors appointment for 40 minutes later. The doctor advised us we needed to see a paediatrician as soon as possible. Two days later we walked into a paediatrician’s office. He looked at Mackenzie and within two minutes he stated he believed she had Spinal Muscular Atrophy (SMA) type one. This was confirmed the next day by a neurologist. Our world fell away.

I shut down. Everything went blurry, muffled and I felt like collapsing. I remember looking at Jonny and said ‘what just happened?’. We walked into that office thinking we just were lagging in her tummy time.

Little bub has decided the car isn't for her anymore. This is so tough because I'm used to being out and about but now she just cries the whole way. Hopefully it is just a phase… So we are having an at home weekend. What do you do when you are at home? Dress your babes up in unicorn attire of course! ? #unicorn #10weeksold #cutiepatootie #babygirl #carhater #mackenziesmemories @kmartaus @countryroad @adairs @pretty.in.pine

We spent seven months and 11 days focused on making memories with our baby. Every second was perfection. We took her all around Australia from Broome through Byron and to Cairns. Mackenzie went to the tropics and the snow, saw the Archibald’s and sailed on a yacht in Tasmania, to only name a few memories. We celebrated every ‘monthday’. We were the three best friends this world has seen. But on 22nd October 2017, just one week ago Mackenzie passed away at Sydney Children’s Hospital. We are destroyed, lost and broken. Everything is quiet, we have no one to care for. My baby is gone.

SMA is a ‘rare’ neuromuscular disorder characterised by loss of motor neurons and progressive muscle wasting, often leading to death. It is the child version of motor neuron disease brought into society’s attention through the ice bucket challenge. In Mackenzie’s case we were told it to be extreme, rapid and terminal. Whilst there are trial injections, Spinraza, that help delay the onset of symptoms there is no cure.

SMA babies slowly lose muscle, movement, the ability to feed, to swallow and finally to breath. The average age babies with SMA type one live to is nine months with a maximum of two years. Upon hearing her diagnosis we were broken. We could not speak, let alone breath. The shock was enormous.

I cannot express the love we feel for Mackenzie. We may be biased but we feel she was the most beautiful baby that ever existed. Her smile melts us. All gums, blue eyes that sparkle and two gorgeous dimples each side. Not to mention her personality. She is all love, laughs and joy. Her future would have been limitless.

All we could do was make sure she smiled as much as possible through dancing, music, games, love and cuddles for as long as we can. We focused on making memories with our baby.

We had never heard of SMA. Neither had our family or friends; however, we soon learnt it is the number one genetic killer of babies under two. How then can no one have heard of this disorder? We can only assume it is because babies often don’t make it to one year old. However, some medical professionals we have spoken to haven’t heard of SMA!

Happy 1st Fathers Day to my beautiful husband. Mackenzie and I could not be going through this without you. Thank you for bringing happiness and laughs to our lives no matter how hard things get. Your daughter looks at you like you hung the moon. You are so very loved xx #mackenziesmemories

One in thirty five people are carriers of SMA. If two carriers have a baby there is a one in four chance of the baby having SMA. These statistics are astounding to us. This ‘rare’ neuromuscular disorder is not so rare. Why hadn’t we heard of it. Why wasn’t it tested for if it was the number one genetic killer? We test for Down Syndrome.

We have since learnt that a person can find out if they are a carrier through a simple blood or saliva test during pre-pregnancy screening. There are two main places in Australia https://www.counsyl.com/ or https://www.vcgs.org.au/tests/prepair

We undertook all the tests offered to us before and during pregnancy including other genetic testing (harmony test), ultrasounds, fertility tests, pre-pregnancy health blood tests and even acupuncture to get my body ready. But we were not offered this easy genetic carrier testing. This is because they only offer the test if you have had someone in your family who have had it. But 4 out of 5 children born with genetic disorder do not have a family history of the disorder.

Research shows that on average, a person can carry one to two lethal recessive disorders. We now have the technology to stop the pain, suffering and cost to families of terminal or life long severe disorders. SMA is not curable but it is 100% preventable through this genetic testing.

Due to the new reality we find ourselves in we spent the last five months in communication with the NSW and Federal Health Ministers to try to create change for Mackenzie. We want to help raise the awareness of pre-pregnancy genetic testing amongst people planning a pregnancy and health care professionals. This testing already exists, people just need to know about it so they can make an informed choice. There is a general lack of awareness of these genetic tests even amongst healthcare professionals. We have had a good response from Parliament including from the Prime Minister, state and Federal Health Ministers and opposition party. Now Mackenzie has passed away we are even more determined to create change for her.

Whilst we know this genetic testing is a controversial topic, going through the pain we now are, we truly believe carrier testing should be routinely offered to people as part of pregnancy planning, even if you have already had a child. It is an individual decision. One you do not have to take if you do not agree with it but the option should sit there to be taken up by those who do believe in it. Anyone who has not been told they have to watch their child die; that they will not watch their baby turn one can not fathom the pain involved. We are not talking about genetic testing to pick eye colour, we are talking about terminal, life shattering disorders.

Last Wednesday our beautiful daughter Mackenzie suddenly fell ill. For four days she fought like a warrior. Yesterday Mackenzie passed away peacefully laying between us surrounded by love and her favorite music. Our baby girl is gone. Our world has lost its brightness and colour. Instead our shooting star will be now and forever lighting up the sky. We are lost without you. Our world has no direction. We love you. We miss you. Thank you. #mackenziesmemories #changeformackenzie

Now to give Mackenzie siblings we have to undertake IVF. The embryos created through IVF will have to be tested before they are implanted. An expensive process but one we have to do.

We have been lucky in that our friends and family have joined forces around us to shower us in love, look after us and start a Go Fund Me page.

This left us free to focus on making Mackenzie’s life happy, comfortable and filled with love while she was here. It also allowed us to do something important with the information we have been given about SMA and genetic testing. We are determined to make change for Mackenzie.

Despite all this we are so grateful.

My husband and I feel so lucky to have met our little girl. Mackenzie made us parents. She is the most special person this world has ever seen. More special than this world can handle it seems… We would now not have changed having her in our life no matter how short a time.

We are grateful that we were in the position to both have been able to take leave from our jobs as Police Officers for the Australian Federal Police. This allowed us to create memories with Mackenzie. It allowed us to be a family.

Mackenzie fell ill quite suddenly. She went from being healthy to passing away in four days. Whilst too fast for us we are grateful it was not a slow decline. She never felt pain. She never knew she was sick.

We are grateful that our family, friends and strangers have surrounded us with love, light and support.

Mackenzie and I were lucky that Jonny brought so much entertainment and happiness to our lives. He was Mackenzie’s best toy. I would be lost without him.

Thank you for reading my baby’s story.

If you want to know more about Spinal Muscular Atrophy or find out how you can support for those affected by the disease, visit smaaustralia.org.au.

Previous: Ketogenic diet, apart from weight loss it may also improve effect of cancer drugs
Next: I Ran A Half Marathon… And Survived
Related posts
Pet Care News