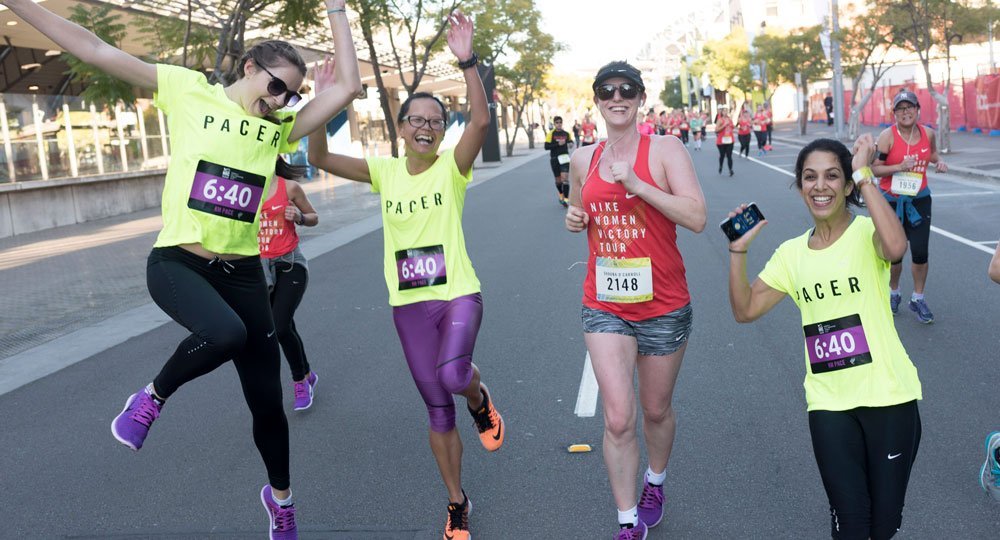 Home » Fitness » I Ran A Half Marathon… And Survived

Four weeks ago I was right in the middle of training for my first half marathon, doing daily runs, knocking out long runs on the weekend and indulging in my wildest carb fantasies (pasta, potatoes, more pasta). Suddenly I only had a couple of days to go and I panicked big – was I ready to run this? It was time to put my training to the test.

I woke up at 4:30am (it was freezing!) the morning of the race to have a light brekkie, chucked on my racing gear and caught the Nike express train to the race course.

The atmosphere was electric – Beyonce was pumping, there were tents to get your hair braided, get your nails done, speak to nutritionists, grab a protein ball and so much more. I spoke to so many awesome women who were all there for different reasons – to challenge themselves, to get a new PB, to train for a full marathon, or just because they loved to run.

After a workout led by coaches Sam Strutt and Bec Wilcock I shedded my extra layers (bye warm trackies and jumper), chucked on my Nike race tee, got into my pace group and waited for the horn and smoke to signal my group starting. After a 10 second countdown (with my nerves increasing with each second) the horn sounded and my 21km challenge had begun!

The first 11km were good; I found my pace and kept it steady, had my running playlist going on my iPod and was taking in everything around me. I hydrated at the water stations, listened to the cheers of people who were watching from the cheer zones and started chatting with one of the pacers, which kept me distracted from the little niggles I was starting to feel in my muscles and feet.

At around 11km I started feeling a bit tired, and by 14km I had hit a wall. My knees and hips were aching, the bottom of my feet were sore and I could feel my pace starting to lag. For the next 4km I really had to push myself to keep going and I stopped a couple of times to start power walking and collect myself.

When I started my training I kept saying to myself that I didn’t care about how long it took me to finish, just as long as I ran the whole way. I would need to start walking sometimes during my training but I would tell myself I wouldn’t on race day. I learnt during the race that there is no shame in switching to walking – heaps of people were. It helped me to gather my thoughts, give myself a little pep talk and prepare for the last leg. With so many women supporting each other and the awesome pacers checking up on everyone I never felt I was alone, we were all doing it together.

Once I hit 18km I was a woman on a mission – I was making it to the end of this race! With this motivation I pushed through, and once I entered the Sydney Olympic Park Athletic Centre and saw the finish line I started to run my little heart out. I crossed the finish line to cheers from my mates and coaches feeling on top of the world. I had done it!

If someone had told me three months ago I would be running a half-marathon I wouldn’t have believed it.

I also wouldn’t have believed it if you also said I would consider doing another one, which I am now! Running with a group of like-minded women trying to achieve a goal was so inspiring. Even though the race was hard, I had an absolute ball.

If you are thinking of taking the plunge and doing one, dive right in. If you put your mind to it you can do it. It’s all about having fun, making friends and reveling in the atmosphere of a group of amazing peeps all pushing themselves to the limit – it’s a pretty rad thing to be a part of.

And yes, I am super sore now and can’t feel my calves but it was still totally worth it!

The Nike Women’s Half Marathon took place at Olympic Park on Sunday July 3 2016 and is part of the global NikeWomen Victory Tour.

Previous: This Aussie Couple Just Lost Their Daughter To A Disease You’ve Never Heard Of
Next: This Hack Will Change The Way You Wash Your Makeup Brushes
Related posts
Pet Care News