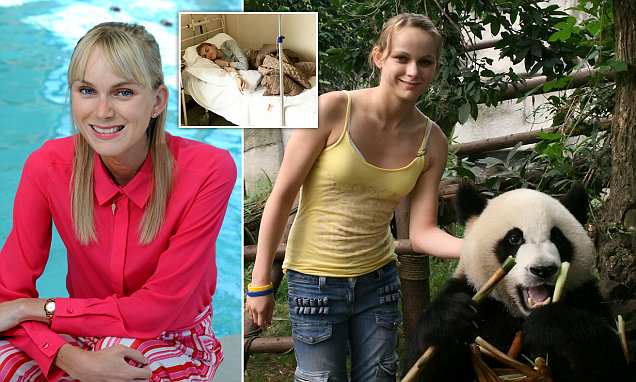 The holiday snap that dashed a champion swimmer’s Olympic dreams: Young athlete developed deadly Lyme disease after petting a panda in ‘a once in a lifetime experience’

A champion swimmer on the cusp of her Olympic dream contracted life-threatening Lyme disease after petting a panda in ‘a once in a lifetime experience’.

Sophie Ward, 24, from Garstang, Lancashire, suffered from recurring infections, migraines, food intolerances and sore throats for years after visiting Beijing to watch the Olympic games in 2008.

With doctors being unable to get to the bottom of what was wrong, Ms Ward was forced to drop out of college after she became too weak to carry her bag.

The gifted swimmer, who was a 14-year-old national champion at the time and on the London 2012 World Class Programme, gave up the sport she loved due to stabbing abdominal pains.

After being told she may have Chronic Fatigue Syndrome, blood tests finally revealed Ms Ward’s diagnosis, which is thought to have come from a tick on the panda.

She said: ‘My Olympic dreams being dashed was heartbreaking. A bite from a tick completely changed my life.’

Ms Ward, who is forced to use a wheelchair on long trips, is speaking out to raise awareness of Lyme disease and encourage greater research into its treatments. Sophie Ward became infected with Lyme disease at 14 years old after being bitten by a tick on a panda. She suffered from recurring infections, migraines and sore throats for years The champion swimmer, now 24, became too weak to train and gave up her beloved sport Supermodel Bella Hadid was diagnosed with Lyme disease in 2012.

Her mother, Yolanda, and brother, Anwar both have the disease as well.

The family likely got the disease in upstate New York where the family had a horse barn.

Hadid’s Lyme disease has caused her both mental and physical anguish.

Her diagnosis was reportedly the reason she dropped out of a promising equestrian career.

The 21-year-old Victoria’s Secret model has become an outspoken advocate for the difficult-to-diagnose disease that is often called invisible.

Immediately after petting the panda in a ‘once in a lifetime experience’, Ms Ward, who was on holiday with her family, began to feel unwell and was ‘sweating uncontrollably’.

She said: ‘We went back to the hotel and I saw the doctors. They said it was a fever and gave me two days of antibiotics.

She said: ‘I was getting severe pains in my muscles and my joints. I kept going to the doctors but they treat all these things separately.

‘Everyone is telling you, you are fine but deep down, you know you are not.

‘My health was declining and I did not feel right. But I even started hiding my symptoms or lying about them as I felt people wouldn’t believe me.’ ‘I burst into tears’

Ms Ward was referred to a specialist in January 2017, saying: ‘It wasn’t until I was examined and we went through all my illnesses and travel experiences that we pinpointed China.

‘When I described what had happened in China and how I had got the fever, they told me that [Lyme disease] was highly likely because a fever is one of the main symptoms.

‘The consultant said I must have got bitten by a tick while seeing the pandas. I did not get a bullseye rash.

‘But only around 50 per cent of cases get a rash and Lyme disease can lie dormant in the body for up to 30 years. Mine was dormant for four years before I started getting poorly.’

Speaking of her diagnosis in March 2017, when her weight hit its lowest, Ms Ward said: ‘I just burst into tears. I had known for years that I was not well and I felt no one had believed me.’

After being given the devastating diagnosis, Ms Ward has also discovered she had Coxsackie virus. China had an outbreak of the virus in 2007, with 22 related deaths. ‘I was starting to hate the sport I used to love’

Ms Ward was forced to give up swimming in December 2009 due to constant pains in her abdomen.

She said: ‘It was getting to the point where the pain was so bad, I was starting to hate and dread the sport I used to love.

‘I did not want to hate it as it had been my life and my everything and I loved it.

‘But it was taking its toll on my health so I had to give it up.

Ms Ward, who writes a blog for Lyme disease UK and is one of its eight administration members, is using herbal treatments to control her symptoms due to her body being too weak to cope with antibiotics.

WHY DO TICKS POSE SUCH A THREAT TO HUMANS?

Lyme disease is a bacterial infection spread to humans by infected ticks. Ticks are tiny arachnids found in woodland areas.

The parasites feed on the blood of humans and animals. Their bites often go unnoticed, leaving the tick to remain for several days gorging on blood, before dropping off.

The longer the tick is left in place, the higher the risk of it passing on the infection.

What are the symptoms?

The earliest and most common symptom is a pink or red circular rash around the bite site. It can develop three to 30 days after a person is bitten. The rash is described as being similar to a bull’s-eye on a dart board.

An infected person may also suffer flu-like symptoms, including tiredness, headaches and muscle or joint pain.

If left untreated, further symptoms, including muscle pain and temporary paralysis of the facial muscles, can develop months or even years later.

In its late stages the disease can trigger symptoms similar to fibromyalgia or chronic fatigue syndrome.

Lyme disease is not contagious but is the most common tick-borne infection in Europe and North America.

It has gained more exposure in the last few years as celebrity sufferers – including Bella Hadid and Avril Lavigne – have spoken out about their condition.

Most tick bites happen in late spring, early summer and the autumn – the times when people are most likely to be outside, hiking or camping.

There is currently no vaccine to prevent the disease. The best way to avoid it, is to avoid being bitten.

What to do if you find a tick:

If you do find a tick they can be removed by gently gripping the parasite as close to the skin as possible, preferably using fine-toothed tweezers, and pulling steadily from the skin. Never use a lit cigarette end, a match head or essential oils to force the tick out.

Previous: This Is The Workout Behind Jessica Biel’s Phenomenal Physique
Next: We Found Out If Weighted Blankets Really Work For Anxiety
Related posts
Pet Care News