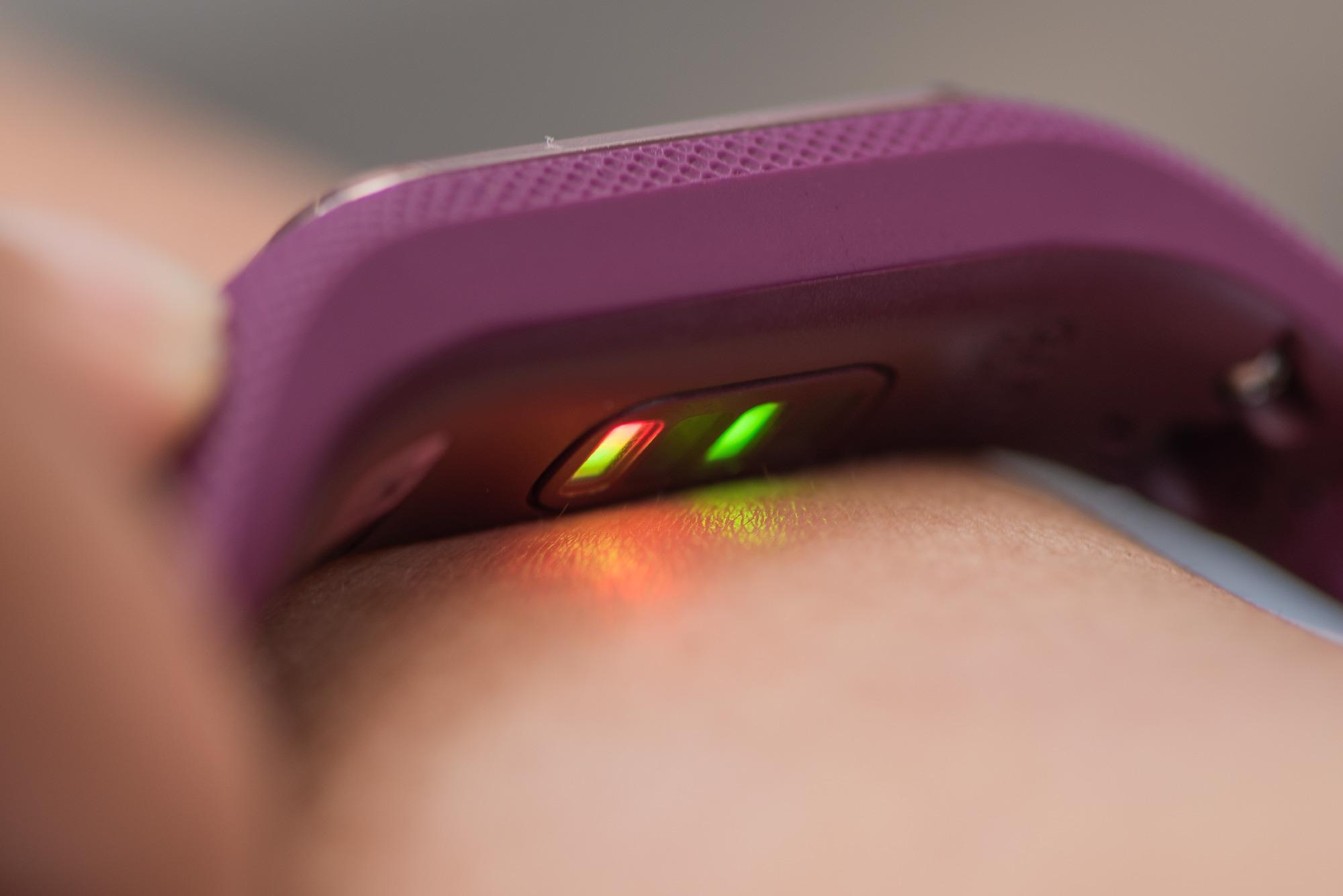 Studies have indicated that wearable sensors such as smartwatches efficiently detect physiological changes following vaccination objectively. In addition, they are more sensitive and could continuously monitor reactions to vaccination, even in those individuals who do not report any such reactions. For instance, a smartwatch can accurately determine a vaccine recipient's heart rate, which correlates with the severity of the vaccine reaction. Additionally, it can show when heart rate returns to baseline levels.

The emergence of new variants of concern (VOCs) of severe acute respiratory syndrome coronavirus 2 (SARS-CoV-2) has weakened the immune protection conferred by COVID-19 vaccines, including mRNA-based vaccines. Studies have reported a decline from 67.2-73.9% to 45.7-64.4% in the efficacy of the BNT162b2 vaccine to control morbidity within three months of the booster administration.

Henceforth, post rapid increase in Omicron-related hospitalization, countries like Israel initiated vaccination campaigns to administer a second mRNA booster shot. These campaigns focused on high-risk populations, such as the elderly and immunocompromised. However, people were hesitant to receive the second booster shot, mainly because its safety was not yet established.

The researchers conducted the present study as part of the PerMed observational prospective study, wherein they enrolled 2,019 participants who had received one or two doses of a BNT162b2 booster to compare the short-term effects of both the doses.

The team had sufficient smartwatch data to compare the objective short-term changes in the level of the physiological indicators for 508 of the 615 participants. They analyzed this data from seven days before the administration of the second booster dose, i.e., the baseline period with those in the seven days after the vaccination. 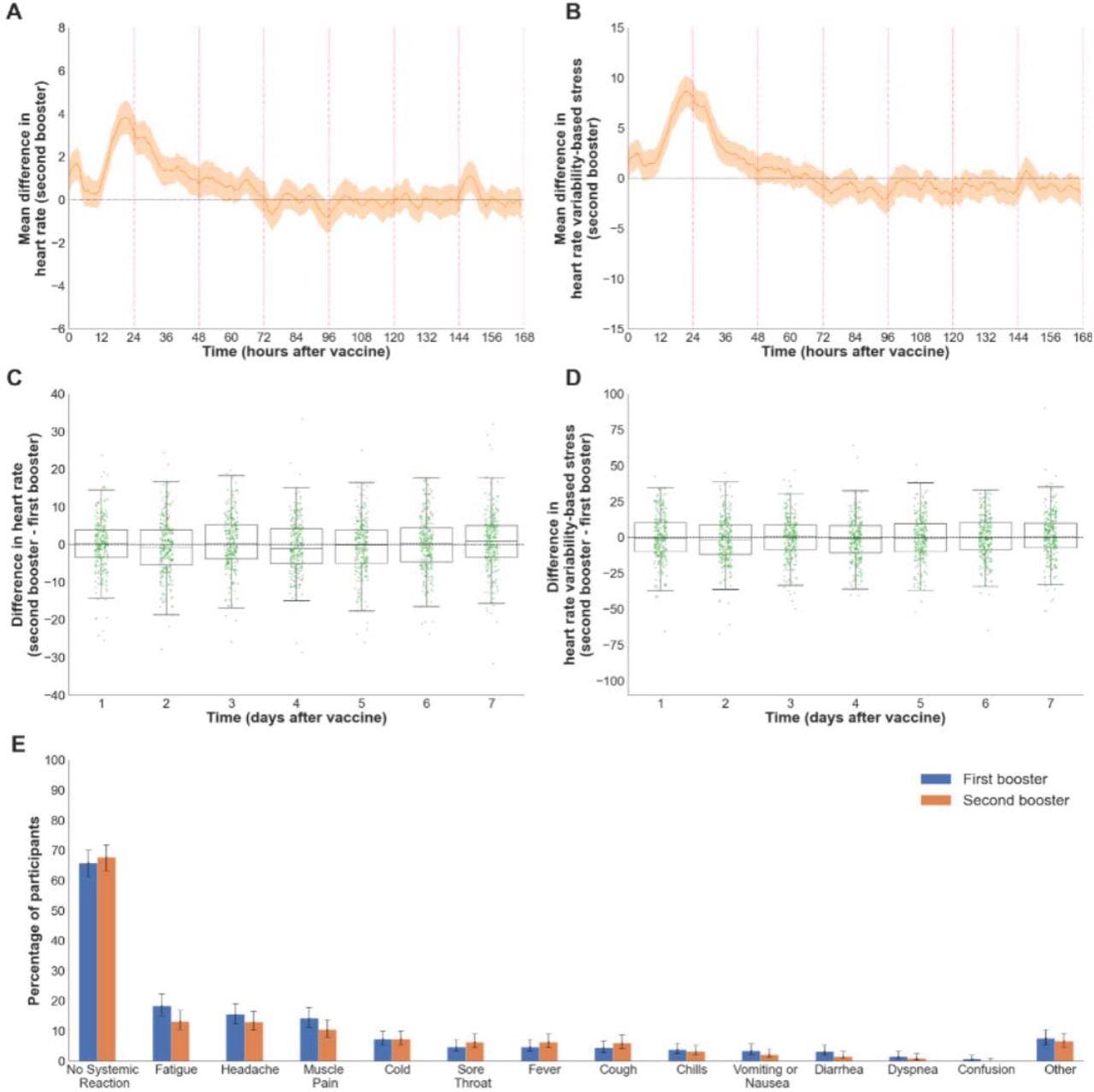 Self-reported and physiological reactions to the second booster dose compared to the first booster dose. (A-B) Reactions to the second booster as recorded by the smartwatches. The figures show the mean difference between the baseline and post-vaccination period in (A) heart rate (n=507) and (B) heart rate variability-based stress (n=505). Mean values are depicted as solid lines, and 90% confidence intervals are presented as shaded regions. (C-D) A comparison of the reactions recorded by the smartwatches between the first and second boosters. The figures show boxplots of the differences between the daily mean changes in smartwatch indicators (each change is between the post-vaccination and baseline periods) of the second and first boosters (C) heart rate (n=301) and (D) heart rate variability-based stress (n=297). Each green dot represents a single participant. (E) A comparison of the reactions reported by participants between the first and second boosters (n=316). The bars represent the percentage of participants who reported a given reaction. Error bars represent 90% confidence intervals.

The researchers adhered to the United States Centers for Disease Control and Prevention (CDC) guidelines to categorize participants' self-reported reactions as severe, mild, and none. The researchers fitted an ordinal logistics regression model to observe and analyze the reactions' severity separately, following the first booster from other variables, including age and time from the first to the second booster.

Likewise, they fitted a multiple linear regression model to explore the association between the severity of two physiological indicators, heart rate and heart rate variability (HRV)-based stress to the first booster vs. the second booster controlling for the same variables. First, they calculated the daily mean change between the post-vaccination and baseline periods separately for the first and second boosters, followed by the difference between these two means for each participant.

The authors identified a significant rise in the heart rate and HRV-based stressors in the first 48 hours following the administration of the second booster compared to baseline levels. However, these changes faded after the initial 72 hours, with measurements returning to the baseline levels.

A total of 615 participants received the second booster shot, of which 65.5% of individuals did not report any new symptoms. The most frequently reported reactions were fatigue, headache, muscle pain, cold, and a sore throat. Notably, these reactions faded in nearly all the participants within three days.

There study data indicated no significant differences between the two booster doses for the peak time and time taken in returning to baseline levels of the physiological indicators and the self-reported adverse reactions. Therefore, the study highlighted the short-term safety of the second booster dose of the BNT162b2 vaccine. On the downside, most of the participants in the second booster analysis were over 50 years, with a higher rate of underlying medical conditions, in line with current Israeli and the CDC vaccine administration guidelines. Therefore, the study findings could not be generalized.

medRxiv publishes preliminary scientific reports that are not peer-reviewed and, therefore, should not be regarded as conclusive, guide clinical practice/health-related behavior, or treated as established information.

Neha is a digital marketing professional based in Gurugram, India. She has a Master’s degree from the University of Rajasthan with a specialization in Biotechnology in 2008. She has experience in pre-clinical research as part of her research project in The Department of Toxicology at the prestigious Central Drug Research Institute (CDRI), Lucknow, India. She also holds a certification in C++ programming.

Previous: High cholesterol symptoms: The colourful sign on your face that ‘should raise suspicion’
Next: Thread the needle pose is the perfect post-work stretch
Pet Care News