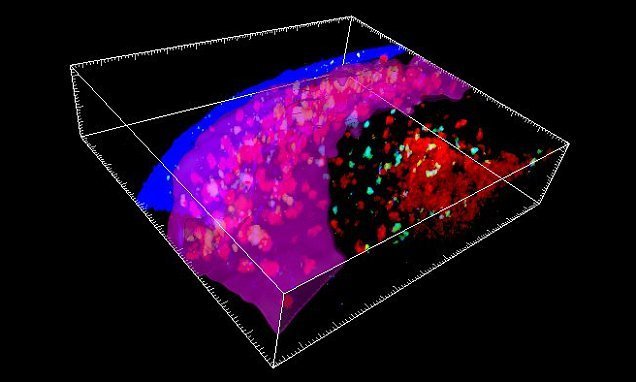 New ‘micro-organs’ have been discovered in the human body which could explain how we remember how to fight off illness.

The bands of cells, revealed in a study for the first time, act as a headquarters for the body to plan attacks against returning infections, scientists say.

And the discovery of what have been nicknamed SPFs by scientists could explain how vaccines train the body to remember what to do when infected.

They contain memory cells which contain a library of immune information and can transform into white blood cells and themselves join the fight against an infection.

Experts say understanding how and where the body remembers immunity could help to develop better vaccines in the future. 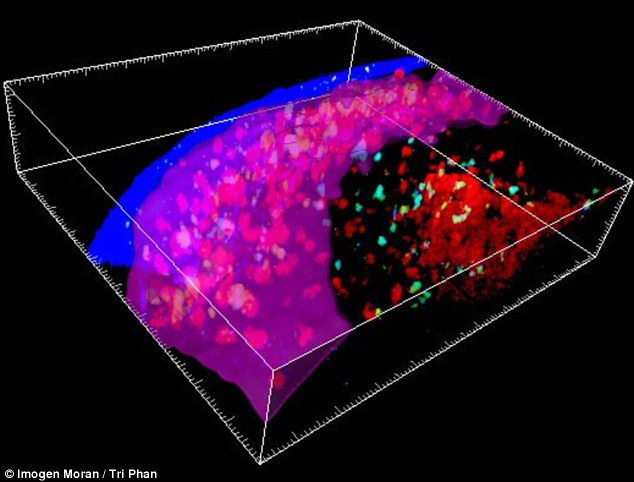 SPFs (pictured as the pink and purple band) contain a large gathering of immune cells which appear near the lymph node (red) when a person begins fighting off an infection, according to researchers at the Garvan Institute of Medical Research in Sydney

Scientists at the Garvan Institute of Medical Research in Sydney, Australia, discovered the SPFs in mice and found humans have the same tissues.

Thin and flat structures, the collections of cells may not have been spotted in the past because they only appear temporarily when someone is ill.

And microscopes which can only see two-dimensional images may not have seen them because they are so thin.

But scientists have now used 3D images to discover what they have named subcapsular proliferative foci – SPFs for short.

Appearing on the lymph nodes speeds up the reaction to infection

They appear on the lymph nodes, the glands of the immune system of which there are between 500 and 700 clustered around the body.

This, the researchers say, is key to the body being able to react quickly because the lymph nodes are strategically placed control centres for the immune system, which are positioned where invading bacteria or viruses can enter the body.

Senior researcher Tri Phan said: ‘When you’re fighting bacteria that can double in number every 20 to 30 minutes, every moment matters.

‘To put it bluntly, if your immune system takes too long to assemble the tools to fight the infection, you die.

‘This is why vaccines are so important. Vaccination trains the immune system so that it can make antibodies very rapidly when an infection reappears.

‘Until now we didn’t know how and where this happened.’

SPFs disappear once the infection is gone

After an infection has been fought off the sheet-like organs then disappear until the next time the person becomes ill.

And the SPFs only appear when the body is fighting an infection it has fought before, suggesting they contain a library of immune information.

The researchers describe them as a ‘one stop shop’ for fighting off remembered infections.

Vaccines work by introducing – or encouraging the body to produce – the memory cells which are contained in these SPFs.

‘There are still mysteries hidden within the body’

However, the new findings suggest in future vaccines could focus on how the SPFs turn into the right type of white blood cells to fight specific illnesses.

Dr Phan added: ‘This is a structure that’s been there all along, but no one’s actually seen it yet because they haven’t had the right tools.

‘It’s a remarkable reminder that there are still mysteries hidden within the body – even though we have been looking at the body’s tissues through the microscope for over 300 years.’

In 1995, gastroenterologist Andrew Wakefield published a study in The Lancet showing children who had been vaccinated against MMR were more likely to have bowel disease and autism.

He speculated that being injected with a ‘dead’ form of the measles virus via vaccination causes disruption to intestinal tissue, leading to both of the disorders.

After a 1998 paper further confirmed this finding, Wakefield said: ‘The risk of this particular syndrome [what Wakefield termed ‘autistic enterocolitis’] developing is related to the combined vaccine, the MMR, rather than the single vaccines.’

At the time, Wakefield had a patent for single measles, mumps and rubella vaccines, and was therefore accused of having a conflict of interest.

Nonetheless, MMR vaccination rates in the US and the UK plummeted, until, in 2004 the then-editor of The Lancet Dr Richard Horton described Wakefield’s research as ‘fundamentally flawed’, adding he was paid by attorneys seeking lawsuits against vaccine manufacturers.

On January 6 2011, The British Medical Journal published a report showing that of the 12 children included in Wakefield’s 1995 study, at most two had autistic symptoms post vaccination, rather than the eight he claimed.

At least two of the children also had developmental delays before they were vaccinated, yet Wakefield’s paper claimed they were all ‘previously normal’.

Further findings revealed none of the children had autism, non-specific colitis or symptoms within days of receiving the MMR vaccine, yet the study claimed six of the participants suffered all three.