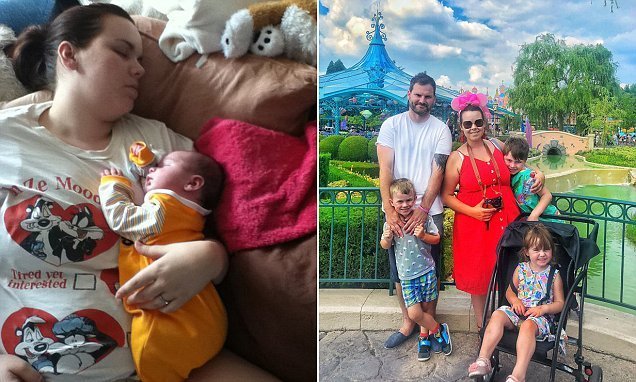 ‘The consultant told me if we’d left it a few more hours I could be dead’: New mum, 29, developed deadly sepsis after infected C-section wound began leaking pus

A new mum who developed deadly sepsis after her emergency C-section wound became infected is urging others to know the tell-tale signs.

Harriet Shearsmith, 29, from North Yorkshire, is lucky to be alive after waking to find her nightdress soaked in pus just two weeks after the birth of her first child, Reuben.

Rushed to hospital while teetering on the brink of death, the lifestyle blogger was only saved by quick-thinking hospital staff who recognised the symptoms.

But, shockingly, she was already just minutes away from organ failure.  ‘The consultant told me if we had left it even just a few more hours, then I could be dead,’ she said.

Now, she’s urging others to be aware of the condition, which is referred to as the ‘silent killer’. 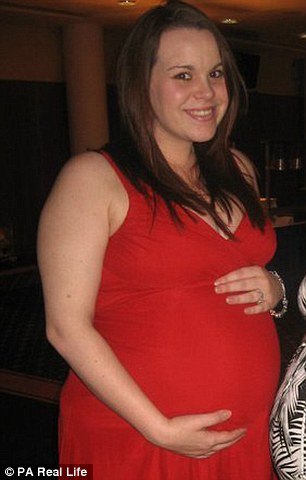 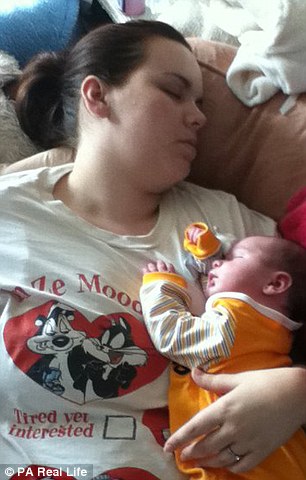 Close call: Harriet Shearsmith, 29 (left, while pregnant )says she is lucky to be alive after waking to find her nightdress soaked in pus just two weeks after the birth of her first child (R)

Harriet and her husband, Adam, welcomed their first-born on March 3rd, 2011.

Returning from hospital, she struggled to produce breast milk and developed a headache. Visiting her GP, she assumed she was a tired new mum and vowed to rest.

But, a day later, she developed a migraine-like headache so severe that she could barely open her eyes and was drenched in sweat whilst also shivering.

She also noticed her C-section wound felt enlarged and a little bit lumpy.

Taking to her bed, when Harriet awoke around 11pm, she realised her nightdress was soaked in what she assumed to be menstrual blood.

‘Adam was asleep next to me so I asked him to get me some clean sleepwear,’ she recalled. ‘I hadn’t opened my eyes properly, but when Adam saw me he said, ‘That’s not blood,’ sounding terrified. He said it was pus.’

That is when the seriousness of the situation hit Harriet, with the adrenaline awakening her senses. 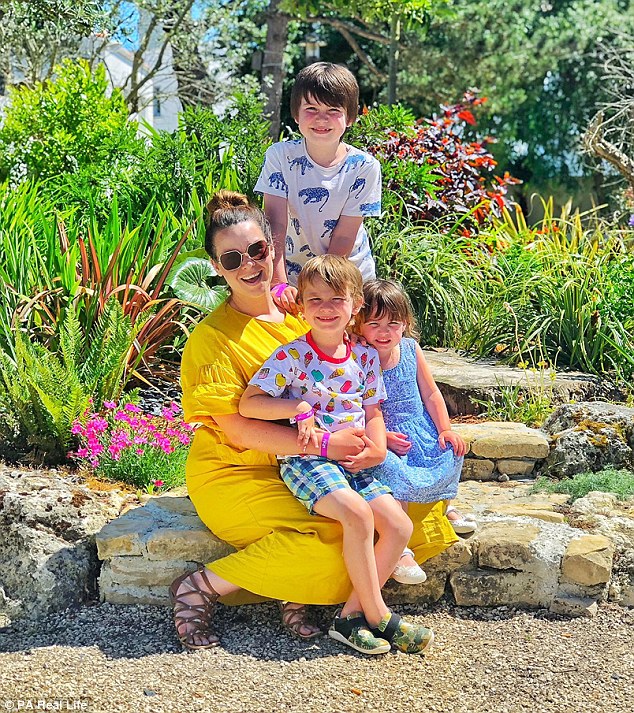 Healthy now: Harriet, who made a full recovery, pictured with Reuben (back) Edith and Tobias

‘It smelt putrid, like rotting flesh, coming from my C-section wound,’ she recalled. ‘The pus and blood mix had covered my nightshirt from above the knee to my chest and it was still seeping out.’

Adam gave Harriet a maternity towel, like a sanitary pad, to stop the flow and went to get her mum Georgina Arkle, 68, a retired nurse who lives with the pair.

‘She took one look at me and told Adam to drive us to the hospital as there wasn’t enough time to wait for an ambulance,’ said Harriet.

‘Mum came too so she could take Reuben if we needed her to. I stumbled into A and E and said my C-section wound was leaking fluids.

‘When the nurse at York Hospital took the maternity towel off and looked at the wound, it spurted forwards towards her and smelt vile. 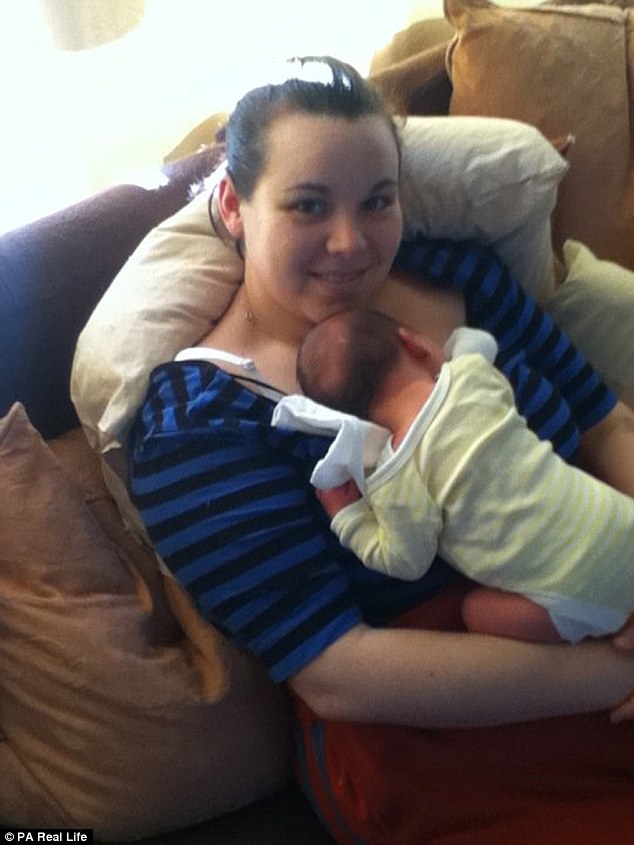 Warning signs: Just two weeks after giving birth, struggling to produce milk and breastfeed her boy, Harriet developed a headache…which was the first symptom of sepsis

‘The last thing I saw as the room faded black was the nurse grabbing a team to help keep me alive.’

Harriet was kept in hospital for four days whilst her wound was drained and she was pumped with antibiotics.

‘I really thought I was going to die,’ she said.’It was four terrible, drowsy days without my newborn or husband. Four days where I couldn’t care for myself and had to have bed baths.

‘I was just hoping that my scar would close and that I could go home soon.’

Harriet admits she had never heard of sepsis before a doctor confirmed her diagnosis, but it is now a word she will never forget. 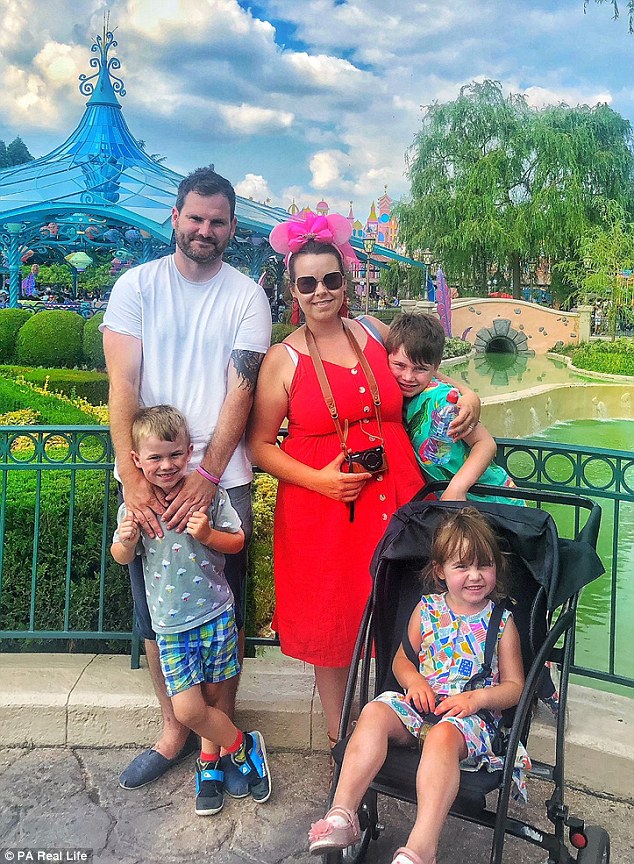 After being discharged, Harriet was given antibiotics to take home to keep any infection at bay. She admits she initially struggled to bond with her eldest son because of the time they spent apart.

Harriet explained: ‘I struggled to hold him as easily, I never breast fed him and I often feel like I’ve let Reuben down in some way, like I haven’t been enough of a mum to him.’

But thankfully she had complication-free pregnancies with her youngest two, who were both also born at York Hospital.

Harriet is grateful to the hospital for saving her life and for the care it gave her during all her pregnancies. Now she wants to raise awareness around maternal sepsis and has started a campaign called Suck It Sepsis.

Aiming to raise funds for charity The UK Sepsis Trust, Harriet wants to prevent other mums from facing the same life-or-death ordeal.

She said: ‘There needs to be more education so people think of sepsis straight away, and it doesn’t become deadly. I was so lucky that we caught it early, but sadly others are not as lucky.’

‘Harriet’s frightening story highlights how, for every child we hear about in the media whose life has been claimed by sepsis, there is another who is grieving the loss of their parent.

‘If caught early, sepsis can be easily treated with antibiotics but without quick diagnosis and treatment, the consequences can be devastating.

‘We’re very grateful to Harriet for helping to raise awareness of an illness that affects so many yet is so poorly recognised. Together we can encourage everyone to be able to ‘just ask: could it be sepsis?’.

Sepsis, also known as blood poisoning, kills 44,000 people in the UK each year, and, without quick treatment, it can lead to multiple organ failure and death.

Symptoms include slurred speech or confusion, extreme shivering or muscle pain, passing no urine in a day, severe breathlessness, feeling like you are going to die, and mottled or discoloured skin.

What are the key symptoms of sepsis? The ‘silent killer’ that can cause death in minutes

Sepsis, known as the ‘silent killer’, strikes when an infection such as blood poisoning sparks a violent immune response in which the body attacks its own organs.

It is the leading cause of avoidable death, killing at least 44,000 a year.

If caught early, the infection can be controlled by antibiotics before the body goes into overdrive – ultimately leading to death within a matter of minutes.

Sepsis is a leading cause of avoidable death killing 44,000 people each year

But the early symptoms of sepsis can be easily confused with more mild conditions, meaning it can be difficult to diagnose.

A patient can rapidly deteriorate if sepsis is missed early on, so quick diagnosis and treatment is vital – yet this rarely happens.

In the early stages, sepsis can be mistaken for a chest infection, flu or upset stomach.

The six signs of something potentially deadly can be identified by the acronym ‘SEPSIS’:

Anyone who develops any of these symptoms should seek medical help urgently — and ask doctors: ‘Could this be sepsis?’

Previous: Primate study offers clues to evolution of speech: Research finds link between vocal repertoire and relative size of key regions of the brain
Next: How to lose weight using your MIND, according to a hypnotherapist
Related posts
Pet Care News