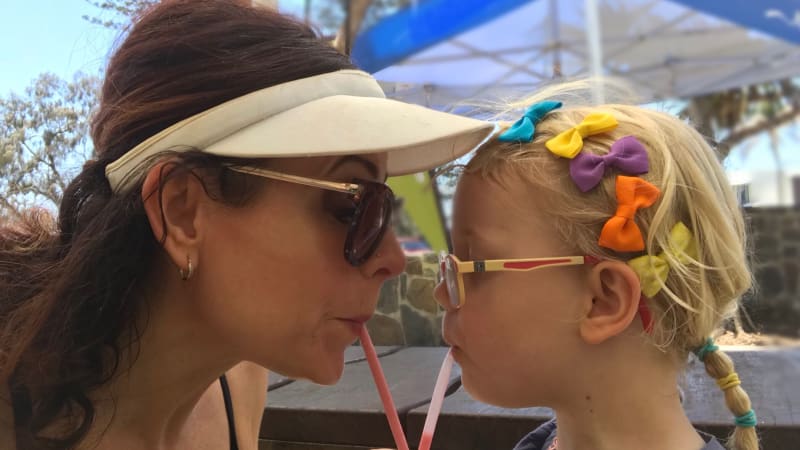 We were happily playing outside, my daughter and I, both aged four … on sunny Good Fridays 38 years apart.

That’s when we each sustained penetrating eye injuries that saw respective panicked parents rush to hospital.

I couldn’t go with my husband when, in such an eerie echo of my own life, it happened to our gorgeous girl. Instead, I went to pieces. 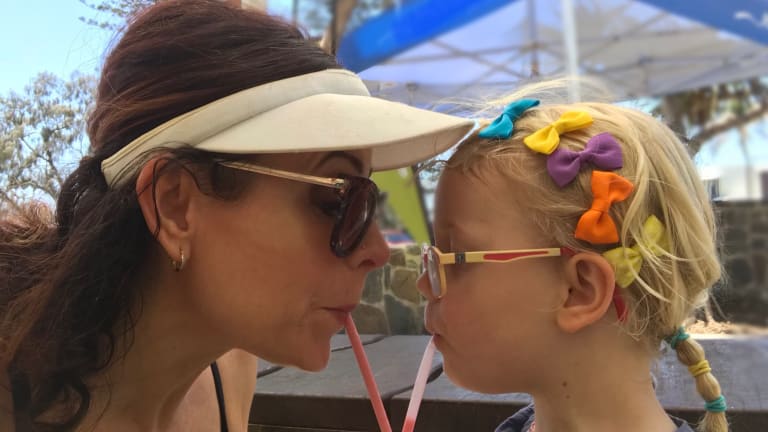 Nicole Pedersen-McKinnon and her daughter.

Our amazing (now shared) ophthalmologist has since told me he’s surprised any child makes it to adulthood with both eyes intact.

Thankfully, that day didn’t rob my daughter of any sight. She only copped a sharp straw to the white part of the eye – and the wound healed quickly.

Unfortunately, in my case about 38 years earlier, I'd had fencing wire recoil with full power and – in a one-in-a-million chance – hit home. It went straight through my pupil and out the back of my retina, all the way into my brain.

Sorry, I know that’s horrible to read. It wasn’t great to experience – and as is often the way with big incidents, is my first memory. But don’t worry, my second memory is how fun hospital was … getting an entire packet of lolly bananas and dancing in the weirdest, boldest hokey pokey ever, with a bunch of kids sporting everything from eye patches to massive casts and rigging.

Apparently, I was lucky I wasn’t killed or intellectually impaired. But of course, that was the last time I had sight on the right, or a decent field of vision, or any depth perception.

It was shortly after my daughter’s near miss that we clocked her extreme vision problems. With no hereditary issues, we weren’t looking for them.

Plus an optometrist, apparently without the skills to diagnose children, had told us she was fine.

In fact, she is severely long-sighted, with an astigmatism that requires optical correction even at her age. Her vision is so bad, despite four huge increments in her glasses prescription, that she can’t see most television images … or a teacher’s white board. And my clever clogs reads her big-font books like she’s trying to climb into them.

Our focus is trying to determine whether her sight is deteriorating. We’re also deep into investigating the cause, to date ruling out ocular albinism (she is bizarrely blonde) and (mercifully) cancer. It’s a big concern that it’s random.

What we know is the only corrective options are probably invasive, like corneal transplants.

What’s more, contact lenses might not be an option. Which means my girl’s beautiful eyes, thanks to crazy-thick lenses, might remain massively magnified in her face.

Luckily/unluckily, coping with other people’s reactions to ‘looking’ different is something I know a thing or two about. This despite six surgeries to try and keep my non-working eye healthy … and behaving. It doesn’t work so it doesn’t want to move the same way as the other eye. 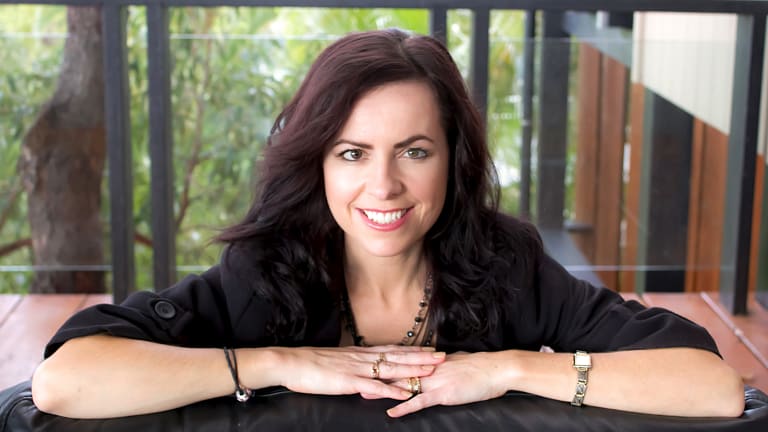 Nicole Pedersen-McKinnon says she has missed out on at least four permanent TV gigs because of her asymmetrical eyes.

Strangely, for me it’s produced a lot of funny scenarios.

Watching my attempts at parking is quite entertaining. Ditto me trying to catch anything.

My wedding ceremony featured the best man and I darting around each other cartoon-style, as he frantically sought to hand over the ring I’d been oblivious to. He was horrified but it was hilarious.

Then there was the time I stuffed up reading my own name … while MCing a Parliamentary Breakfast for dozens of MPs, because I wear matching coloured contact lenses to hide my scarring when I am presenting … and I can barely bloody see through them. Rather embarrassing!

But the career consequences get more serious. For everyone who doesn’t know, as well as a being a money columnist here at Fairfax Media for the past 15 years, I’m a long-time personal finance commentator on television.

I have absolutely lost out on permanent TV gigs due to my eye. It’s a superficial world where women, in particular, are expected to look perfect – and perfectly symmetrical.

We all have our disappointments, though, and how you adjust and emerge is what counts.

Today, oddly, it’s Google that poses my greatest psychological challenge. Thanks to social media, I need to constantly find links for all my stories and interviews, and take screenshots of my TV appearances (we all hate looking at ourselves but, trust me, wrinkles are nothing).

Each time, my search engine helpfully suggests the most common search for me. It’s not ‘articles’, ‘schools talks’, ‘awards’ or my ‘Nicole Helps’ Q&A in The Sun-Herald and The Sunday Age. It’s ‘Nicole Pedersen-McKinnon eye’. 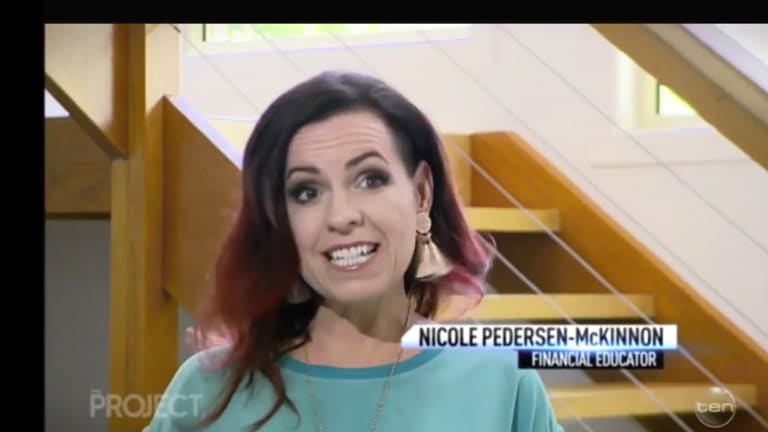 People search “Nicole Pedersen-McKinnon eye” after she appears on TV”.

So much for being judged on merit, huh?

I do get that people are just curious (if you’ve wondered, then you’re welcome) but also it’s like being reminded every single day of your life, of the most traumatic event in it.

So was I bullied at school? I should explain that, until I was 12, and surgery No.3, I was comprehensively cross-eyed.

I would never call it that. I had comebacks, jokes, deflection and, when needed, fight.

Then I’d cry myself to sleep. Now my heart aches that my daughter may have to go through something similar.

At this stage, I have her convinced she’s the luckiest girl in the world to be able to wear “face jewellery” wherever she goes – and bright pink, no less.

But it won’t be long before an unkind, or just honest, kid tells her she isn’t … and so it will begin.

Having contended with an out-there facial flaw for the past four decades, I worry for all our daughters in this perfection-obsessed era.

Anyway, the self-esteem side of serious eye problems is a big thing, but is of course nothing on the physiological.

And so many people have vision issues far worse than ours. I’m extremely lucky to have one good eye with OK, but diminishing-with-age-and-excess-effort, sight. My daughter is extremely lucky to be cared for now by doctors who seem damned good at what they do.

But eyes remain so mysterious and the options to fix sight, so limited. There’s simply not enough money going into ocular research, blindness prevention and vision restoration in Australia. Federal funding for medical research is reducing across the board and priority is given to diseases and conditions with higher cost to public coffers – seldom sight.

Yet 125 babies a year here are born completely blind and 1600 have significant vision impairment. And affecting us all, dramatically improving life expectancies means far worsening vision.

I’ve never spoken ‘on the record’ about my experience before – to be honest, it’s always been a little too painful. But given what my baby girl has in store, I decided to go public and become what’s called a SightFighter ambassador for the University of Sydney’s Save Sight Institute, one of this year’s sponsors of The Sun-Herald City2Surf presented by Westpac.

You can find out more and donate here  … and may even ‘see’ future benefits yourself.

Nicole Pedersen-McKinnon is a Fairfax Money columnist and regular commentator on channels 7, 9 and 10, and commercial and ABC radio.