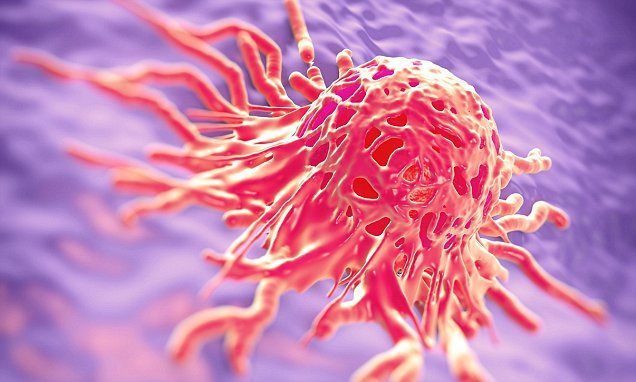 Hundreds of women will be spared from cervical cancer every year when a new test replaces conventional screening, a study suggests.

Routine testing for the human papilloma virus (HPV) is more accurate than testing for abnormal cells because it can pick up the cancer-causing infection before these changes develop, researchers found.

The new screening method led to ‘significantly higher’ rates of precancerous cells being picked up in women, allowing faster treatment to stop cancer developing, according to a study of more than 19,000 women.

Experts say the new method will save the lives of hundreds of British women when it is rolled out on the NHS by the end of next year. Routine testing for the human papilloma virus (HPV) is more accurate than testing for abnormal cells because it can pick up the cancer-causing infection before these changes develop, researchers found (stock)

Fiona Osgun, from Cancer Research UK, said: ‘This change to how cervical screening samples are tested will help prevent more cases and save hundreds more lives from the disease.

Nearly all cases of cervical cancer are caused by persistent infections of high-risk HPV, which causes changes to cervical cells.

In the UK, women are initially tested for abnormal cells before further checks reveal if they need further treatment for HPV.

But the study by Canadian researchers, published in the journal JAMA, found testing for HPV in the first instance had better results.

The women, aged 25 to 65, were split into groups with around half given the HPV test while the others were screened using conventional methods, cytology-based Pap smear testing.

WHAT IS HPV? THE INFECTION LINKED TO 99% OF CERVICAL CANCER CASES Human papilloma virus (HPV) is the name for a group of viruses that affect your skin and the moist membranes lining your body.

Up to eight out of 10 people will be infected with the virus at some point in their lives.

There are more than 100 types of HPV. Around 30 of which can affect the genital area. Genital HPV infections are common and highly contagious.

Many people never show symptoms, as they can arise years after infection, and the majority of cases go away without treatment.

It can lead to genital warts, and is also known to cause cervical cancer by creating an abnormal tissue growth.

Annually, an average of 38,000 cases of HPV-related cancers are diagnosed in the US, 3,100 cases of cervical cancer in the UK and around 2,000 other cancers in men.

HPV can also cause cancers of the throat, neck, tongue, tonsils, vulva, vagina, penis or anus. It can take years for cancer to develop.

Participants completed a questionnaire, which included questions relating to their HPV vaccination status and sexual health.

Researchers, led by the University of British Columbia, found that significantly more women showed signs of abnormal cells in the first round of HPV testing compared to the conventional smear tests, despite similar questionnaire responses.

Referral rates for abnormal test results were 57 per cent in the HPV group compared with 30.8 percent who underwent standard screening.

But four years later, the referral rates were 49.2 per cent in the HPV group compared with 70.5 percent in the other, suggesting earlier detection of the virus.

‘This can mean that women may need to be screened less frequently but have more accurate results.’ There are about 3,000 cases of cervical cancer in the UK every year, leading to around 850 deaths.

It most commonly affects women aged between 25 and 50 and is the leading cause of cancer in women under-35.

There are often no symptoms early on and in many cases the illness is only picked up in the advanced stages when it may be too difficult to treat.

Most cases are preventable with screening the best way of catching it before it develops.

‘It is a much more accurate test that can better identify those at greater risk of cervical cancer, it will save lives.

‘There is much to be done to get the programme ready including ensuring the infrastructure is fit to support the move and that women are comfortable and understand why it is changing.

‘Research shows HPV primary screening will save an estimated 400 cervical cancer diagnoses every year so any delays to roll out could result in diagnoses which could have been prevented.

‘We must also not lose sight of the need to improve attendance of this potentially life-saving tests and ensure women can access it.’

Previous: Dementia linked to ‘chronic, rather than temporary’ inflammation
Next: 5 Things You Should Always Do After A Workout
Related posts
Pet Care News