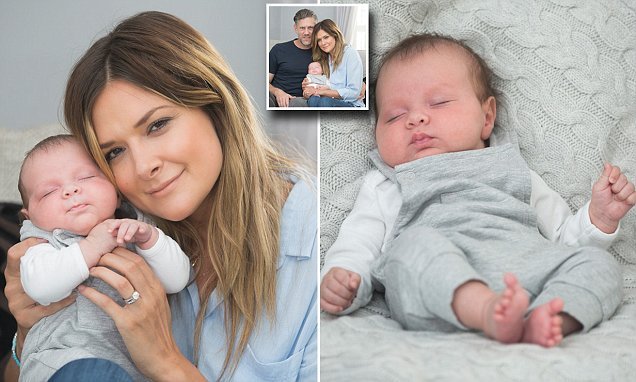 Cancer survivor, 32, gives birth to a miracle baby after doctors performed a rare operation to stitch her cervix back together 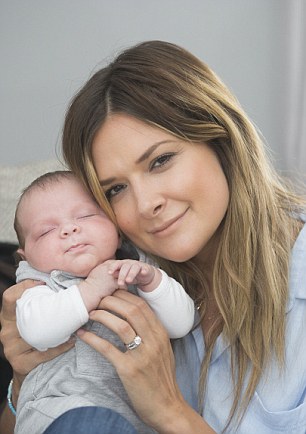 Sarah Dean with her miracle baby George, who is now three months old

After Sarah Dean had surgery to remove her cervical cancer, she feared she would never be able to have a much longed for baby.

So much of her cervix was removed that it would have been impossible for her to become pregnant.

But then doctors carried out an unusual operation.

They stitched together what remained of her cervix above the birthing canal, so that if she became pregnant the stitch would hold the baby inside her womb until it was time to deliver.

She then had IVF, and fertility doctors were able to perform the astonishing feat of guiding the embryo into what remained of her womb through a microscopic hole.

She gave birth to her son George three months ago.

Mrs Dean, 32, of Sutton Coldfield, West Midlands, said: ‘George has literally been saved by a stitch in my womb and the skill of the doctors in being able to place him in there, which wasn’t an easy job. Without that, he wouldn’t be here today because my body wouldn’t have been able to hold him in as he had been growing.’

Mrs Dean, whose husband Paul is 43, was diagnosed with cervical cancer in March 2011, aged 25.

She said: ‘It was such a shock. It was my first smear test. I was so young that I never thought that anything like that could happen to me.

‘When surgeons carried out an operation to remove the cancer, they had to remove so much of my cervix that it would have been impossible for me to successfully get pregnant.’ 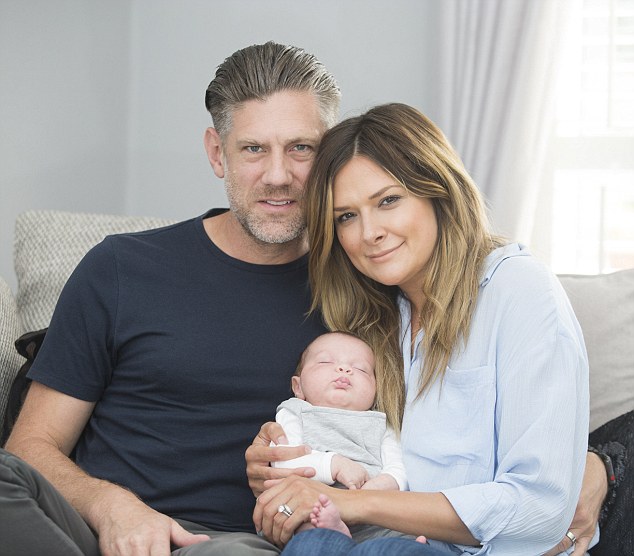 Mrs Dean with little George and her husband Paul. Doctors stitched together what remained of her cervix above the birthing canal, so that when she became pregnant the stitch would hold her baby inside her womb

The surgeons stitched together the two sides remaining of her cervix to form a barrier to keep a baby inside her womb.

She said: ‘It was a remarkable operation. It meant that if I became pregnant, hopefully the stitch would be strong enough to keep the baby inside me long enough to be delivered.’

The womb had been stitched together – but it left fertility doctors with an almost impossible task. There was only a microscopic hole in the side of what remained of her womb through which the embryo could be placed inside. 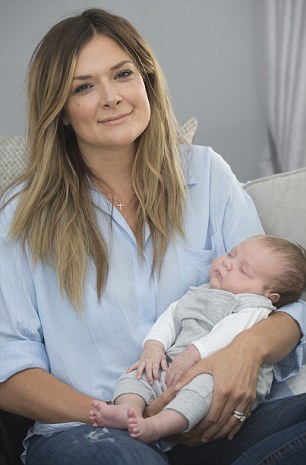 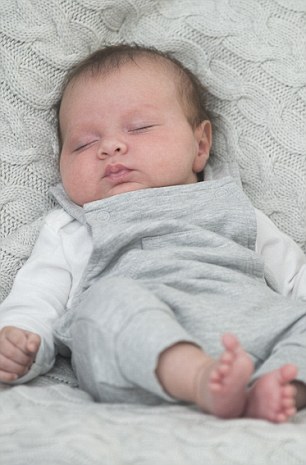 A spokesman for Midland Fertility Services, where she had her treatment, said: ‘The real amazing part of the conception was that the fertility experts had no cervix through which to reach her uterus.

‘It was their skill which found the microscopic hole all the way over in the right hand side of what remains of her cervix, through which they could pass the catheter holding the embryos.

‘To reduce any risk to the embryos and stress to Sarah during the real transfer, they performed a practice transfer to give them time to locate this tiny hole, ready for the real thing a couple of weeks later.

‘This was a completely amazing “above and beyond” element of her IVF treatment.’ Their attempt last September was a success. Doctors also glued the embryo into her womb, and two weeks later she discovered she was pregnant.

She said: ‘We were thrilled that it had worked, and I was so excited to be pregnant. It just seemed like a miracle.’

Despite a scare at 27 weeks when Mrs Dean had a massive haemorrhage and spent two weeks in hospital, George hung on and was finally delivered in May, by caesarean section, weighing in at a healthy 5lb 14oz.

‘I had to have a caesarean because I wasn’t allowed to give birth naturally because of the stitch,’ said Mrs Dean.

‘When he was finally born safe and well, it was such a relief. And it was wonderful to hold him in my arms and be a mother at last.’