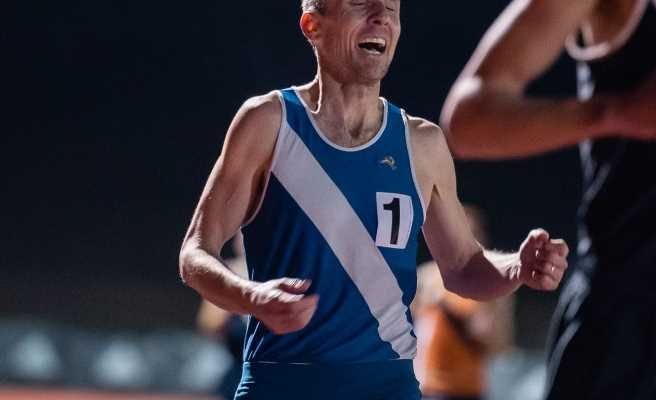 Home » Fitness » Nick Willis Set a Record by Running a Sub-4 Mile for the 19th Straight Year. Here\u2019s How He Did It

On January 19, Nick Willis wrote himself into the record books when he ran a 3:58.63 mile. His time marked the 19th consecutive calendar year that the 37-year-old Kiwi runner has clocked a sub-4-minute mile.

A middle-distance specialist, Willis has sub-4 miles every year since 2003—and even the two years before that, he clocked a 4:01 and 4:02. It wasn’t until 2019 that the record of consecutive years running a sub-4 mile even came onto Willis’s radar. Someone had mentioned that he was one year away from tying fellow countryman and running legend John Walker, who ran sub-4 miles for 18 consecutive years from 1973 to 1990.

When he tied the record in 2020 at the New Balance Grand Prix in Boston, Willis realized he could get the obscure record if he could find a race—something made far more difficult because of COVID-19.

With some research, Willis found the Orange Winter Classic #1 in Orlando, Florida on January 19.

Because of the possibility of not having consistent track access at home in Michigan because of weather or the pandemic, Willis prepared for the event by spending the month between Thanksgiving and Christmas in Flagstaff, Arizona, training aggressively at altitude. A week before the race, back home in Michigan, Willis did a 1200-meter time trial that gave him confidence.

Normally, Willis said, the first race of the season is a bit rusty, but everything lined up right for his record attempt.

“I never felt comfortable, like I was on the edge of the red line the whole way,” Willis said about the race. “We were still able to do it though thanks to good pacing from pacemaker Victor Palumbo, who became the first American to run a sub-4 on an outdoor track in December on U.S. soil. He got us through three laps and did an incredible job.”

Willis’s longevity in the sport is unexpected. Over the years, he’s faced four surgeries, five stress fractures, pulled muscles, strained tendons, and countless minor injuries that have caused him moments of doubt.

He credits his coach, Ron Warhurst—also the head coach at the University of Michigan—and his wife, Sierra, for sticking with him through the highest and lowest times during his nearly two decades of competition.

“A lot of times, I would’ve walked away from the sport satisfied with what I achieved and they always thought there was more left in the tank,” Willis said. “What I did on Tuesday night was not without the unwavering support of them encouraging me. They are the ones who deserve the recognition.

As Willis has gotten older, he says the moments of motivation waver more than before. His motivation was at 90 percent most of the time in his younger years. As it has become tougher to compete with age, he says that number starts to waver toward 80 or 70.

“Tuesday was the first time I felt a lot of satisfaction crossing the line in the last few years,” he said. “I’ve felt frustrated because it doesn’t come as easy as it used to. Someone who finishes strong with a kick is what I’m known for and it’s been a struggle with why I can’t do that. I’m holding myself to unfair expectations. At 37, I can take a step back and look at it with a more relative perspective. Four minutes was the goal. I’m not a 3:50 miler anymore.”

The day after his record, Willis did what many great champions do and went to Disney World with Sierra and their two sons. He’ll be there for seven days while also squeezing in another race—an 800—on January 22. He has five races on tap in the coming weeks.

Because of the pandemic, he’s not sure how many races, especially indoor track races, will happen. However, he is hopeful to compete this winter, to make another New Zealand Olympic team, and to compete in some of the newly-formed Pro Track Series events this year. He also said he plans to ski and skateboard more.

As for his sub-4 streak, he’s not totally sure yet if it’ll continue.

“It seems like a crime to stop at 19,” Willis said. “I have a lot of other things these days. I’m working with Tracksmith now which has been a transition from just a pro running career to a corporate role. But if everything lines up, and I can still have some ski trips out west, I’ll definitely give it a shot.”

Previous: Wuhan marks a year since lockdown as Biden warns of 600,000 dead
Next: Get out of an exercise rut by upgrading your press-ups
Related posts
Pet Care News