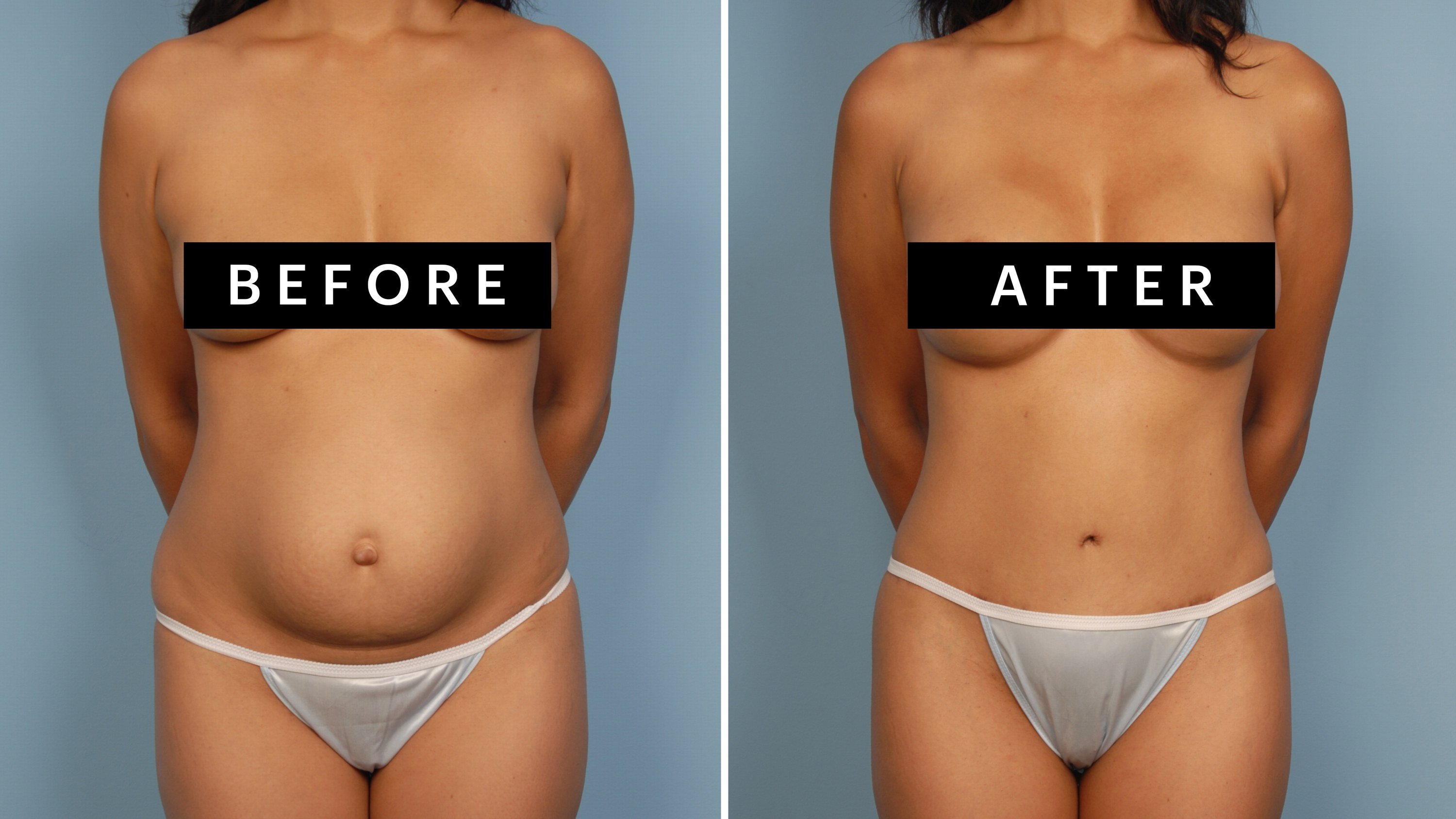 Interest in plastic surgery is at an all-time high, but stigma and misinformation still surround the industry and the patients. Welcome to Life in Plastic, a new series by Allure that aims to break down cosmetic procedures and provide all the information you'll need to make whatever decision is right for your body — no judgment, just the facts. Here, we're covering everything you need to know about the "mommy makeover."

Mommy makeover: It’s the cutesy term for a serious package of surgical procedures aimed at returning a woman’s body to its pre-pregnancy state (one could easily argue the term is pretty problematic, too). And, fair warning, uttering the phrase repeatedly while interviewing the smartest aesthetic minds in the country will absolutely make you feel like a puerile twit.

The moniker irks many doctors as well. “I find it simplistic and annoying when surgeons say, ‘I’m doing a mommy makeover today,’” says Steven Teitelbaum, a plastic surgeon in Santa Monica, CA. “What does that mean? A breast lift and a bit of lipo? Or a giant reduction, a full tummy tuck, and a total body contour? It’s wiser for patients and surgeons to be specific in their language.” Indeed, the classic makeover involves a combination of a tummy tuck (aka abdominoplasty) and breast surgery. But within that framework, there are variations galore: the mini tuck, full tuck, skin-only tuck (as in, cutting away lax, stretch-marked skin but not repairing and tightening the abdominal muscles, which commonly separate in pregnancy); and for breasts, there’s the lift, reduction, augmentation (implants), or some hybrid therein. What’s more, “the modern-day concept of the mommy makeover has broadened further to include liposuction, fat injections to the buttocks, and vaginal rejuvenation,” says Jeremy White, a plastic surgeon in Miami.

If you’re thinking that seems like A LOT, that's because it is. “The Internet sometimes presents cosmetic surgeries as the same as going and getting a haircut, but these are significant procedures,” says Robert Singer, a plastic surgeon in La Jolla, CA. “While the vast majority of patients who have them done are thrilled with the results, people need to be aware of the risks and understand that while it seems desirable to have everything done at once — one anesthesia, one downtime, one recovery — there are some limits as to what can be safely done as far as risk factors.” As a general guideline, he adds, an elective surgery should never run longer than six hours, as “risk factors go up after that.” Yet, a tummy tuck alone can take three to four hours.

Still, the promise of a flatter tummy and perkier boobs — the chance to reclaim what may have been lost in the turbulent transition to motherhood — that’s compelling stuff for some people. “We’ve definitely seen an uptick in mommy makeover-type procedures,” says Richard Baxter, a Seattle-based plastic surgeon. “I think a lot of it has to do with the fact that most new moms are millennials, and they tend to be more accepting of the idea [of plastic surgery].” According to the aesthetic-industry information mill that is RealSelf, the primary demographic researching mommy makeovers is 25- to 34-year-olds. And 2017 stats from the American Society for Aesthetic Plastic Surgery show that nearly 47 percent of all breast augmentations, 55 percent of labiaplasties, and 20 percent of tummy tucks were had by this subset of patients.

Medically speaking, their age is an advantage: “The younger you are [at the time of surgery], the better your skin quality will [likely] be — and the more elastic your skin, the better your results,” says New York City plastic surgeon Z. Paul Lorenc. But that doesn’t mean one should go straight from the delivery suite to the operating room: Plastic surgeons generally recommend waiting at least six months after giving birth, and another six months after weaning (if breastfeeding), “to allow the uterus to contract, the breast tissue to shrink, and the body to recover from the stresses of pregnancy and childbirth,” says White. (One’s emotional readiness is a separate but equally crucial consideration, and many moms do choose to wait until their little ones are more independent before going under the knife.) Makeover-seeking moms should also be “as close to their pre-baby weight as possible, or at least stabilizing at their body’s new set point” before surgery, says Teitelbaum.

A patient of Teitelbaum, this woman received a breast augmentation with a nipple lift on the left, a tummy tuck, and repair of a belly button hernia.

Behind the Popularity Boost

While social media-savvy surgeons, open-book patients, and encyclopedic websites like RealSelf have helped popularize and demystify the various elements of the mommy makeover, recent surgical advances are yielding safer operations and less brutal recovery periods. One of the biggest improvements is “the use of long-acting numbing agents, like Exparel, which are injected into the surgical site and block much of the pain for up to three days following,” says Baxter. “Less post-op discomfort means less reliance on opioids and fewer side effects from those drugs.” The built-in pain relief also gets patients on their feet faster, jumpstarting recoveries, and curbing the risk of blood clots (more on that ahead).

In another move to fast-track healing after abdominoplasties, doctors are working to obviate the need for surgical drains, which have long come standard with the procedure. “When a tummy tuck is done, there’s a large space that needs to be collapsed, and the tissue has to grow together,” explains Teitelbaum. Drains are inserted to prevent fluid from pooling and impeding this process. But “everyone hates them — they interfere with bathing, and make people queasy and uncomfortable.” By adopting a technique called progressive tension sutures — special internal stitches that reduce potential fluid buildup — or incorporating tissue glues and compression garments, surgeons can offer drain-free tummy tucks.

Even smaller tweaks to protocol can reap big rewards. Bucking the usual dictum of not eating or drinking after midnight prior to surgery, White follows more recent data “showing that allowing patients to drink Gatorade the night before and the morning of surgery, along with giving them certain anti-inflammatory medicines, can speed recovery by improving hydration and decreasing postoperative pain,” he says.

Laurie Casas, a plastic surgeon in Chicago, is also exploring new ways to ease the surgical aftermath for moms. One of the most meaningful, she says, has been performing noninvasive fat-reduction in the months leading up to surgery. Before CoolSculpting, “I could only offer liposuction, which is an excellent technique but means tacking on one more invasive procedure, and ultimately lengthening patients’ operating time and healing time,” says Casas. Now, she has suitable candidates undergo a course of CoolSculpting ahead of surgery to freeze away fat in exercise-resistant areas. During this preoperative window, she also provides patients with personalized nutrition and exercise plans to restore as much abdominal muscle tone as possible and minimize the need for muscle-tightening during tummy tucks. With this approach, says Casas, “90 percent of my patients do not need muscle work, and the procedure involves only skin excision and possible umbilical repositioning,” making for a smoother recovery.

For such less-extensive cases, Casas gives women the option of having surgery under local anesthesia. “If you ask moms what makes them most nervous about surgery, they’ll say general anesthesia,” says Casas, noting that it sometimes leaves patients foggy and nauseous (the risk is between 10 and 15 percent), while also carrying the obvious, but rare, risk of death. With a cocktail of "oral medicines that induce relaxation and sleep” — plus numbing injections, and music therapy and eye masks to block environmental stimuli — she can perform a skin-only tummy tuck, or a breast lift, for example — sometimes both at once — without the added worry of general. Says Casas, “In seven years and over 500 cases, not a single patient has said they would opt for general."

So, what’s the trade-off for getting your pre-pregnancy body back? Both the total price and the downtime will depend on the particular collection of procedures one has done and the complexity of each fix. Patients generally pay between $10,000 and $18,000 (plus OR and anesthesia fees) and are out of commission for a week or two (child care is a must during this stretch). Most require pain medication for the first few days — Tylenol if a nerve block was given, harder drugs if not. And doctors typically forbid lifting, twisting, and other physical activities for four to six weeks.

During that time, complications can arise — infection, seroma (fluid accumulation), delayed healing, bleeding — but most are treatable. The gravest risk with mommy makeovers comes from abdominoplasties done under general anesthesia (essentially the core of these surgical compilations), which carry “a higher fatality rate than most other cosmetic procedures,” says Singer: 1 in 16,600 compared to roughly 1 in 55,000. “Almost all deaths resulting from abdominoplasty are due to pulmonary embolism [a blood clot that travels to the lungs restricting blood flow and decreasing oxygen levels] following surgery,” he says. As to why tummy tucks, specifically, come with an elevated risk of clots, some theorize that tightening the musculature may increase pressure inside the abdomen, thereby compromising normal blood flow and “causing stagnation in the venous system,” says Casas. Throw in immobilizing discomfort on the heels of surgery and you’ve got a recipe for clots.

When you piggyback procedures — a hallmark of the mommy makeover — the risk of death creeps up. Abdominoplasty plus one (be it a breast lift, lipo, or whatnot): about 1 in 13,000; plus two: 1 in 10,082. “Every time we do surgery in an area, we create a certain amount of tissue trauma, and that additional tissue trauma may up the risk of blood clots,” Singer says. What’s more, risks climb with time spent under general anesthesia. Which is precisely why surgeons are coming up with alternatives, like the local protocol used by Casas, and the epidural anesthesia Lorenc often administers to mommy makeover patients.

It would be irresponsible not to note, however, that the aforementioned tummy tuck numbers come from years of accrued data. In 2018, “with a heightened awareness of the risk and greater attention toward preventative measures, the probability of that risk is diminishing and should continue to do so,” says Singer. Researchers are currently investigating the etiology of abdominoplasty-induced blood clots to make the procedure safer overall. And in the meantime, surgeons are bettering the odds by screening to evaluate patients’ propensity for clots, encouraging the use of compression garments during and after surgery, and prescribing blood thinners when necessary.

Now, isn’t this panoply of procedures — arguably the mother of all cosmetic undertakings — deserving of a more dignified name?

The Return of Downtime: Why Invasive Plastic Surgery Procedures Are on the RiseThe HydraFacial Phenomenon: Why Everyone Is Obsessed With This In-Office TreatmentFace-Lift: The New Advancements in the Old-School Surgery