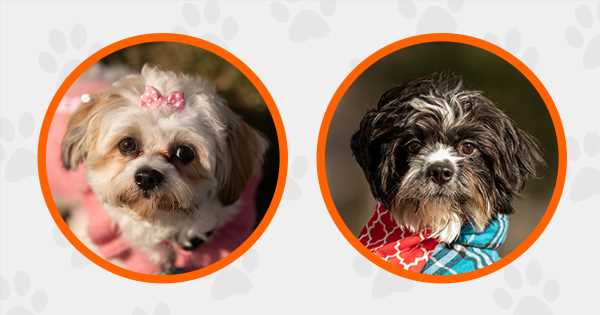 “She made us more united than before. She came to change us—a lot, and for the better,” says Margot M., Wyoming’s adopter.

Every day at the ASPCA, we work to be there for the animals who need us most. Those who are scared and suffering from abuse and neglect, those who are homeless, and those facing the dangers of natural disasters on their own. And while we stay committed to changing their lives, we couldn’t do all that we do without friends and animal lovers like you. We celebrated Giving Tuesday this week, and we hope that in honor of the biggest giving day of the year, you’ll remember that your support makes new beginnings possible for loving animals like Elby and Wyoming.

“Even though I rescued Elby, he really rescued me. He could have gone to any home, he was so cute, he would have been adopted. But my life has really changed—there’s just a special connection,” says Sara L., Elby’s adopter. 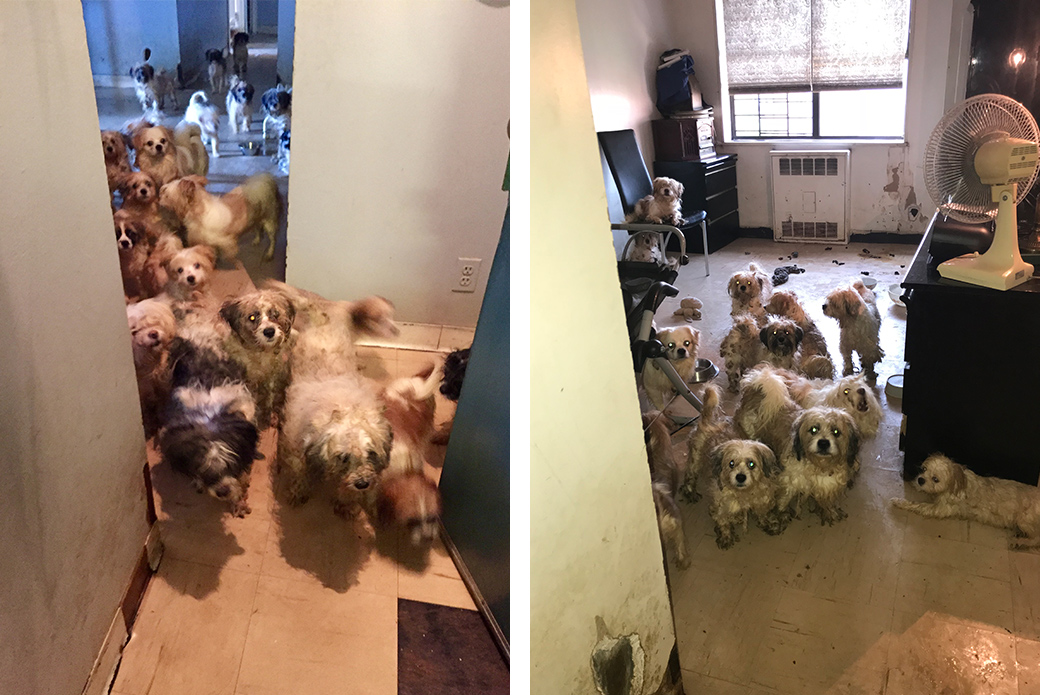 In July 2018, the ASPCA assisted the New York City Police Department (NYPD) in the removal of 33 dogs from a small New York City apartment. The Shih Tzu-mixes were discovered after neighbors complained about excessive barking and a foul smell coming from the apartment. The dogs were found in overcrowded, filthy living conditions and were in need of care and immediate veterinary attention.

“My first reaction to seeing something like that in an apartment is just major concern for just the condition of the animals overall,” says Lisa Kisel, ASPCA Community Engagement Manager. “That means that they had been living in these conditions for a really long time with no one coming to care for them. There was no water, there was no food out, so not only were they living in poor conditions, but they were also without the things they would need to live daily.” 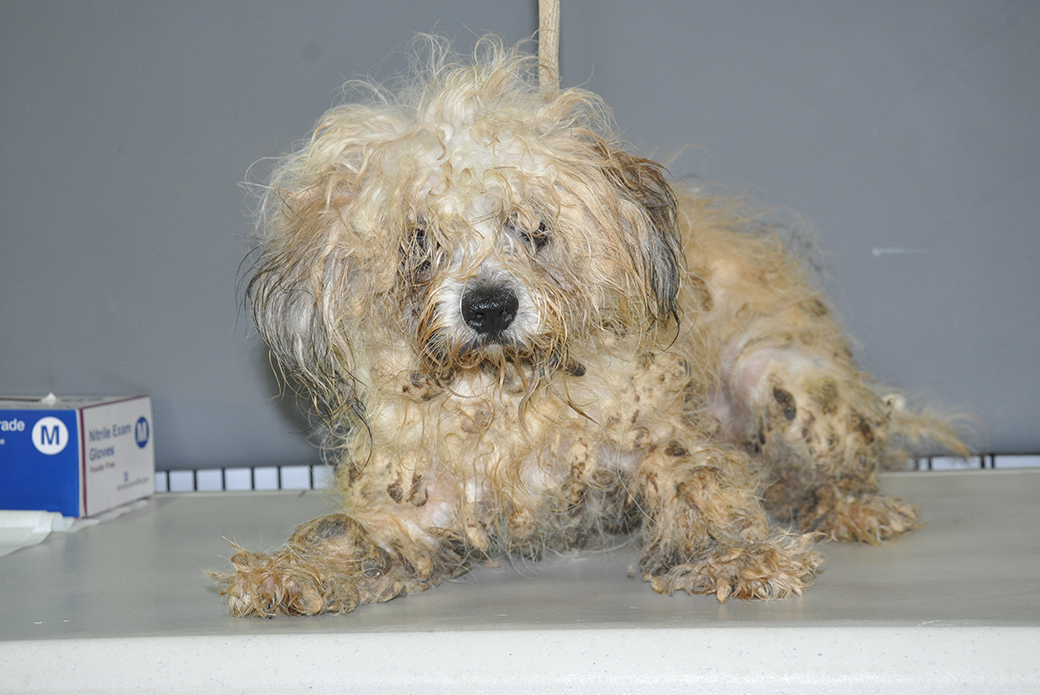 Naturally, these dogs were very fearful and in such poor condition, they were nearly unrecognizable. Removing them from the apartment had to be done carefully and slowly to ensure their safety.

“The conditions of the dogs was alarming because what we saw was severe matting and feces and urine all over them,” Lisa says of the rescue. “Even when we tried to capture them, it was difficult because we were worried about something harming them when we lifted them because of the matting—that was the overall concern, along with the intense fear they had.”

Severe matting in cases like this can sometimes lead to strangulation of the animals’ limbs, so extra care was taken. After their removal, we took the dogs in and began providing the care they had been denied. 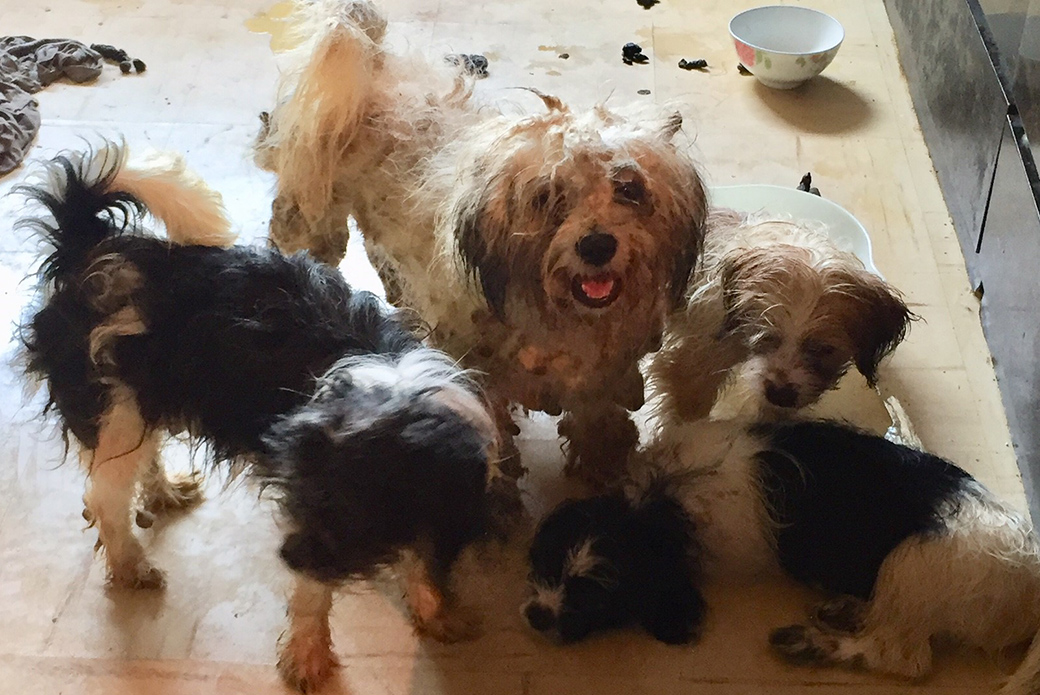 Their previous owner was arrested and eventually pled guilty to the charges.

After they were made available for adoption at the ASPCA Adoption Center, it wasn’t long before these cute little pups were noticed by many.

Margot M. was spending a majority of her days on her own at home while her children were in school and her husband was at work. Her kids had been asking for a puppy for quite some time, and while the responsibility and time of a pet had always held them back, the Summer of 2018 proved to be a turning point.

Margot and her husband were warming to the idea of getting a dog, a puppy to be specific, and soon after, they decided that adoption would be the way to go.

“When we were seriously considering it, one of my kids started showing me adoption videos and I thought ‘Wow! Why can’t we adopt instead of buying? Why not save the life of a puppy, right?’” says Margot. “Personally, it was something that touched me because I was very, very surprised about the situations some of them are in. And that was when we said: “No, we have to adopt. We have to pamper a puppy that needs it.””

So the family searched for animal shelters and rescues and came across the ASPCA. The entire family visited the Adoption Center together, hoping to meet their new family member. That’s when Margot met Wyoming.

“They showed her to us, gave us time to get to know her, and they told us her story,” says Margot, who couldn’t believe what the small puppy had gone through. “We were very shocked, and that’s when we decided [to adopt her]. We decided that it was time to change her life.”

But bringing Wyoming home was an adjustment for the small dog. She was frightened at first and spent days without eating or drinking and cried when Margot would leave the room. Margot was heartbroken. 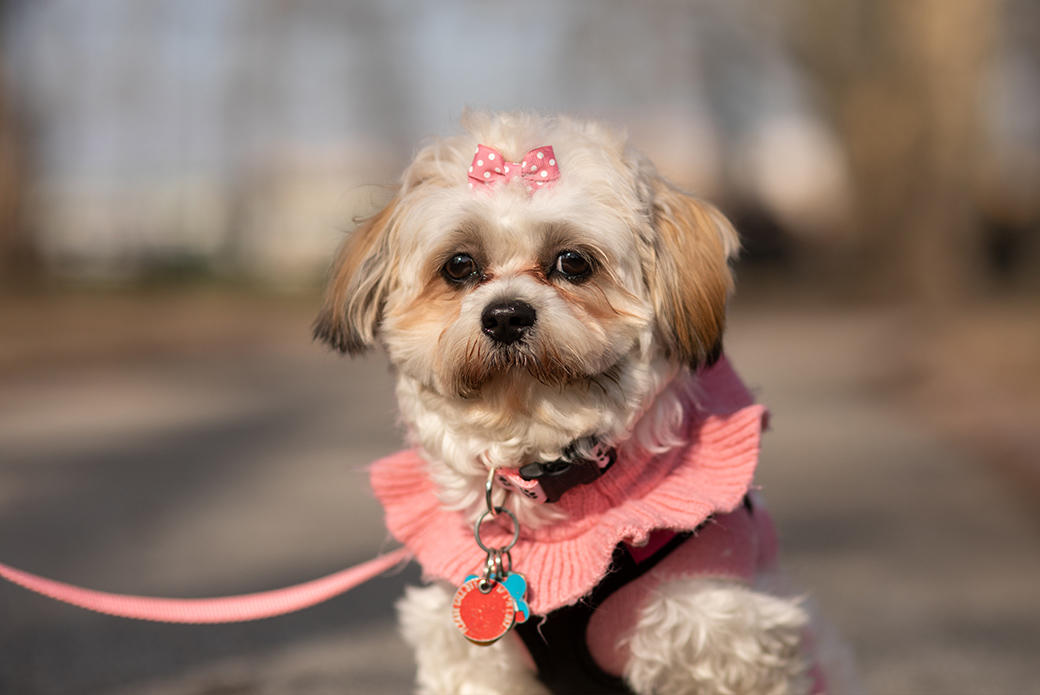 “I would go out and it was like ‘Oh, no, my baby girl is crying!” It worried me, but now she has this certainty that we’ll come back,” Margot says.

Wyoming just needed time in her new home, and now, she’s a world away from her beginnings in that cramped apartment. She is spoiled by Margot and her family, spending her days running around the park, or side by side with Margot. 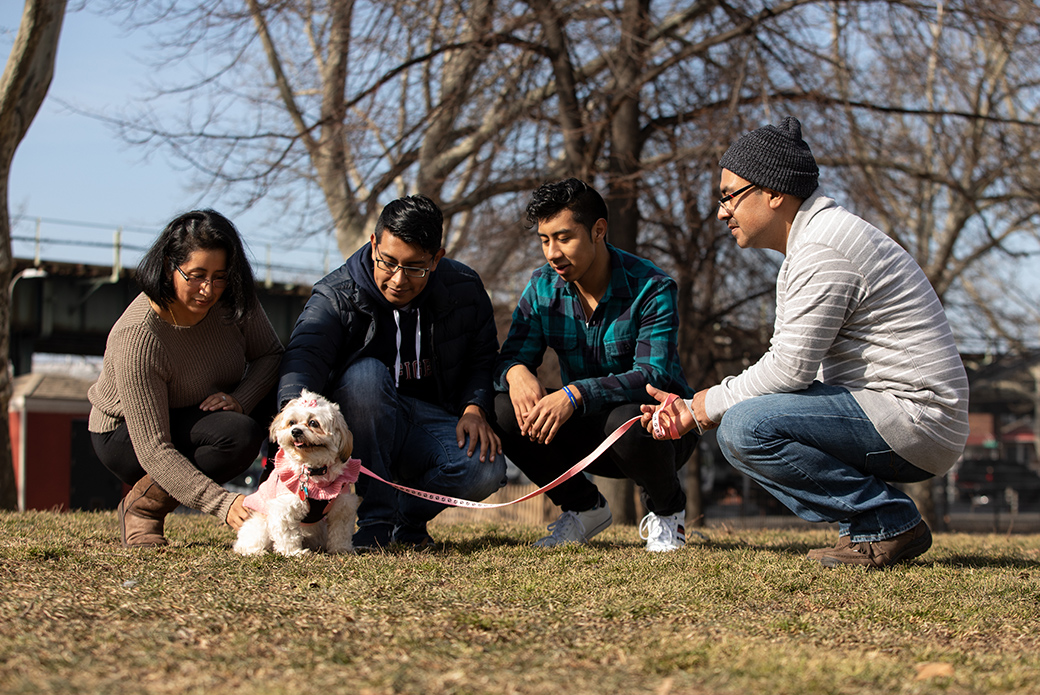 She’s slept in the bed since day one, and while she still waits at the window for Margot’s returns, she’s less anxious when the family does leave the house.

Meeting Wyoming was just what the family needed, and Margot is thankful for being able to find her sweet dog and give Wyoming a new life. 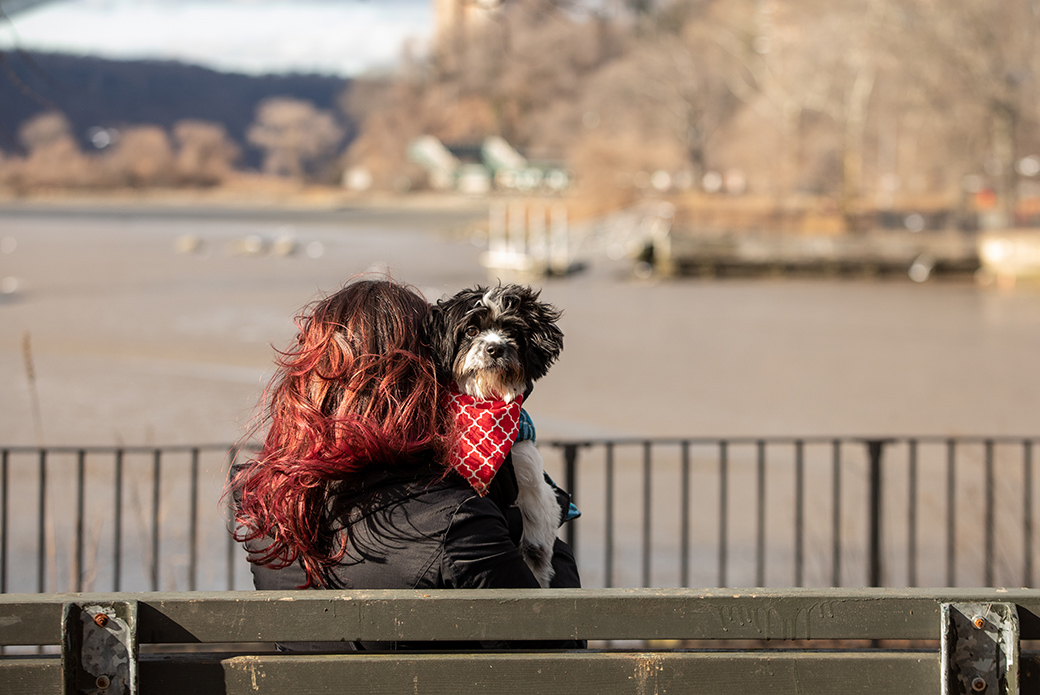 “I was talking to my doctors a lot about adopting an emotional support animal who I could eventually train to be a service animal, and I was reading a lot about people who have trained their own and adopted,” says Sara L. when asked about adopting her dog Elby. “I liked the idea of saving a dog in need.”

Sara and her boyfriend, Jeremy, had been talking about adopting for a while but had yet to visit any shelters. One morning at brunch, the topic of adoption came up again. Jeremy had adopted cats from the ASPCA in the past and convinced Sara to go into the Adoption Center that day to look.

Upon arrival, Sara was told that she was in luck, as we’d recently taken in puppies from a hoarding case. After seeing the puppies, the couple decided to place a hold on a dog that day, and later returned for a formal meet-n-greet and adoption interview. Though they’d initially had another puppy in mind, Elby came into the room and won them over immediately. And as Sara tells us, “the rest is history.” 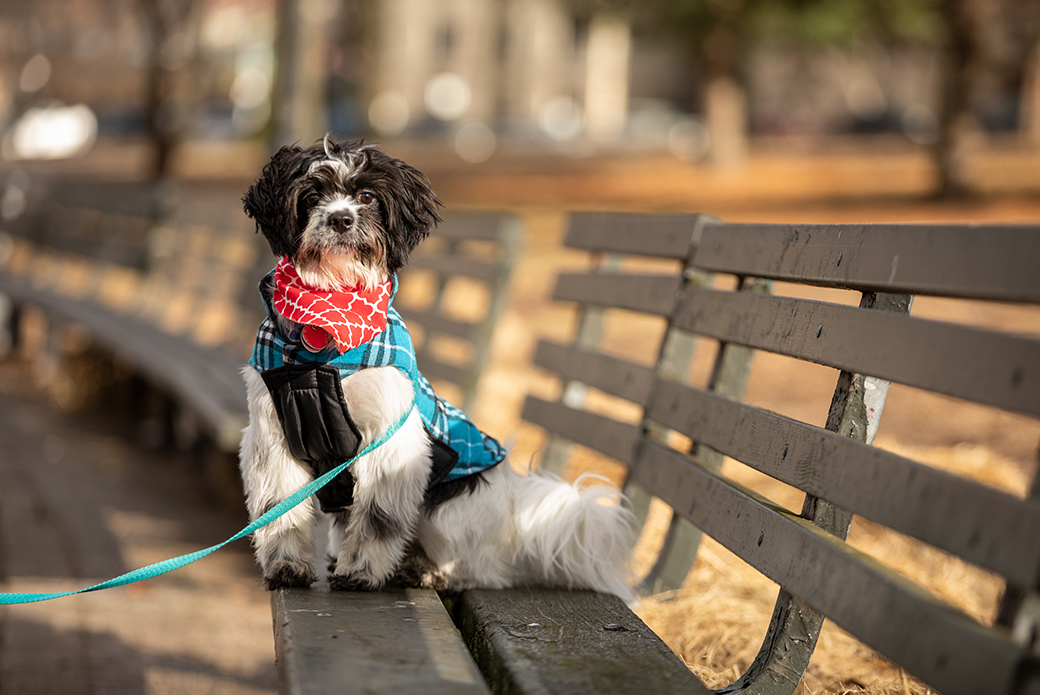 “Before we knew he was going to be ours we didn’t want to commit to a name, we were calling him ‘Little Boo’ or ‘LB’ in texts to each other,” says Sara when asked about Elby’s name. “And I just thought, ‘what if we spelled that phonetically?’”

Still called Little Boo at home and in daycare, Elby is a sweet, social dog. His adjustment to his new life went smoothly, and Sara, a teacher, was on summer break and had plenty of time to bond with her new furry family member. 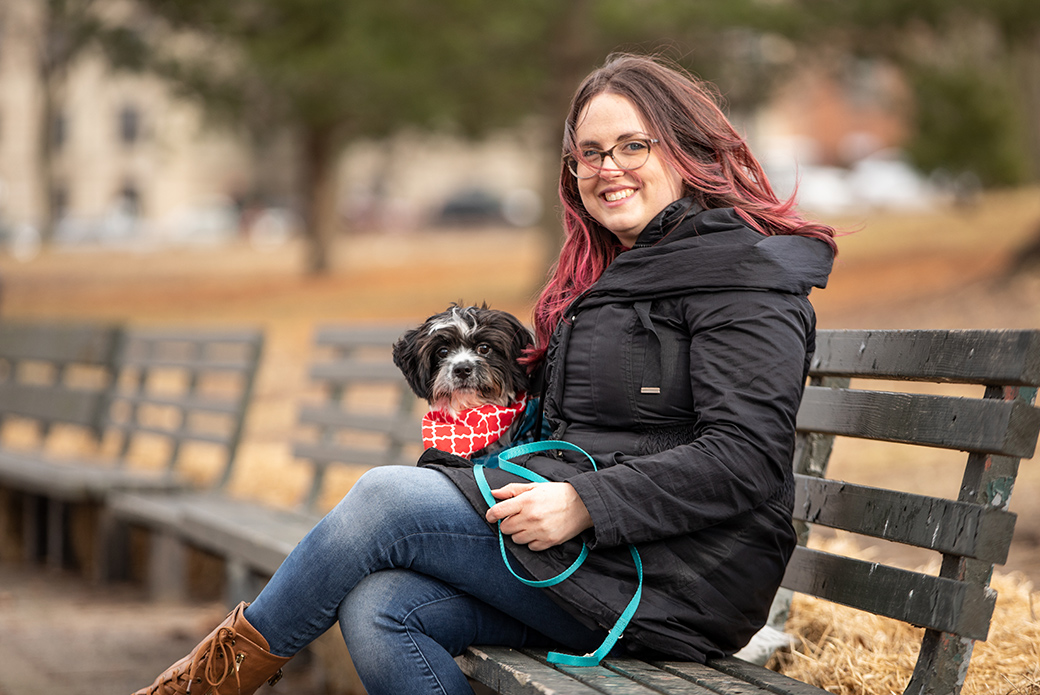 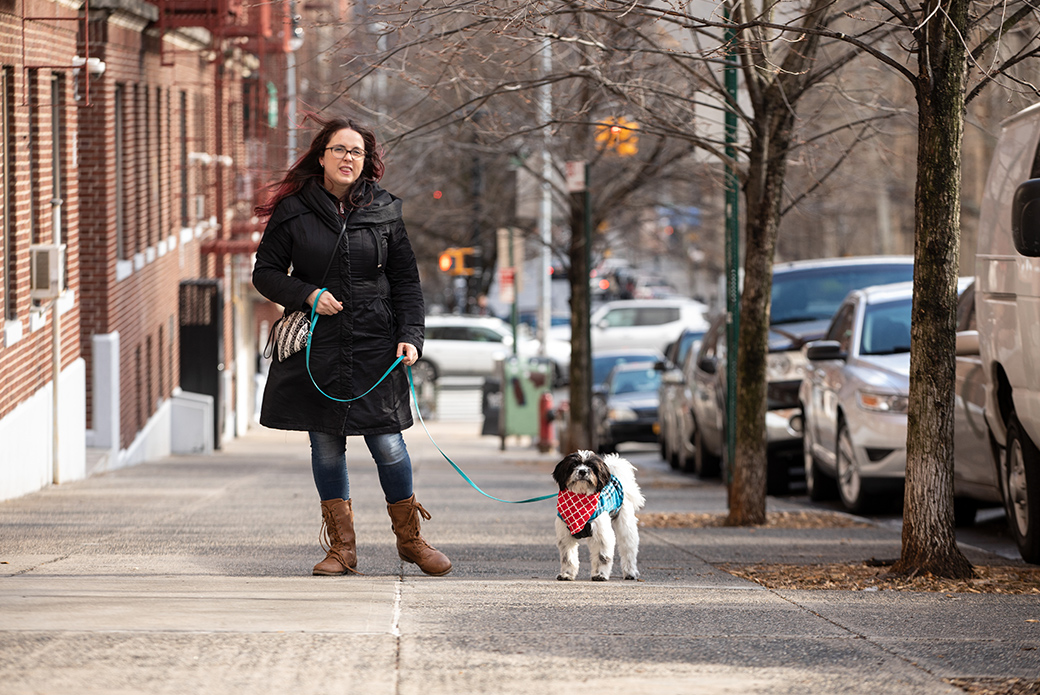 But the moment Sara truly knew that she had made the right decision was three days after the adoption when she took Elby to Long Beach, Long Island.

“He still wasn’t fully leash trained at that point and I was trying to get him to walk with me, and he just looked so happy walking in the sunshine down Long Beach road,” she says. “I thought about how he was once in this dirty, dank, one-bedroom and now he’s roaming the streets of Long Beach in the sunshine with a big smile on his face.”

Watching him then, she realized just how far he’d come from his beginnings and how it must have been meant to be to find one another.

While to many, Sara is the one who rescued Elby, she feels differently. The small dog came to Sarah during a time when she needed the additional support with anxiety and mental health. Any struggles she was feeling were countered by Elby’s need for her to keep going.

“One of the smartest choices I’ve done to help myself in my journey toward recovery and being well is getting Elby,” she says. “He mitigates all of the negative, darker symptoms I would experience when I was alone. haven’t felt this calm and this happy in a very long time and I really think it’s because he’s in my life. He’s amazing.” 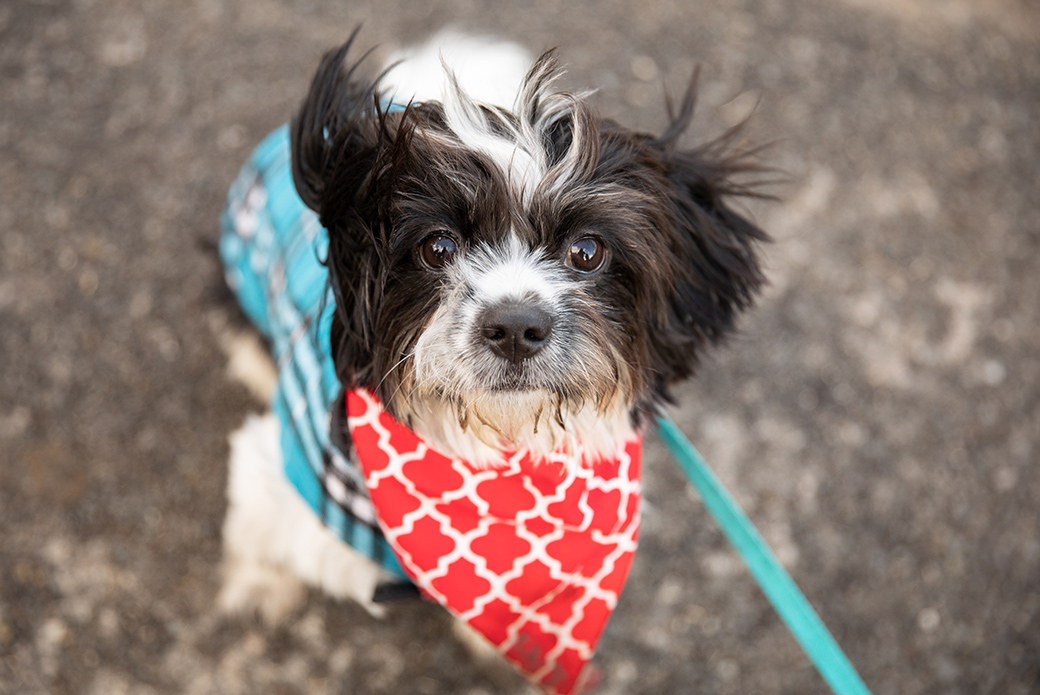 The pair have spent their days walking around their Manhattan neighborhood and visiting Inwood Hill park so that Elby can get some time stretching his legs, darting back and forth across the dog run. During the weeks when Sara was going into school regularly, Elby would spend his days at daycare, playing with all his new neighborhood friends. 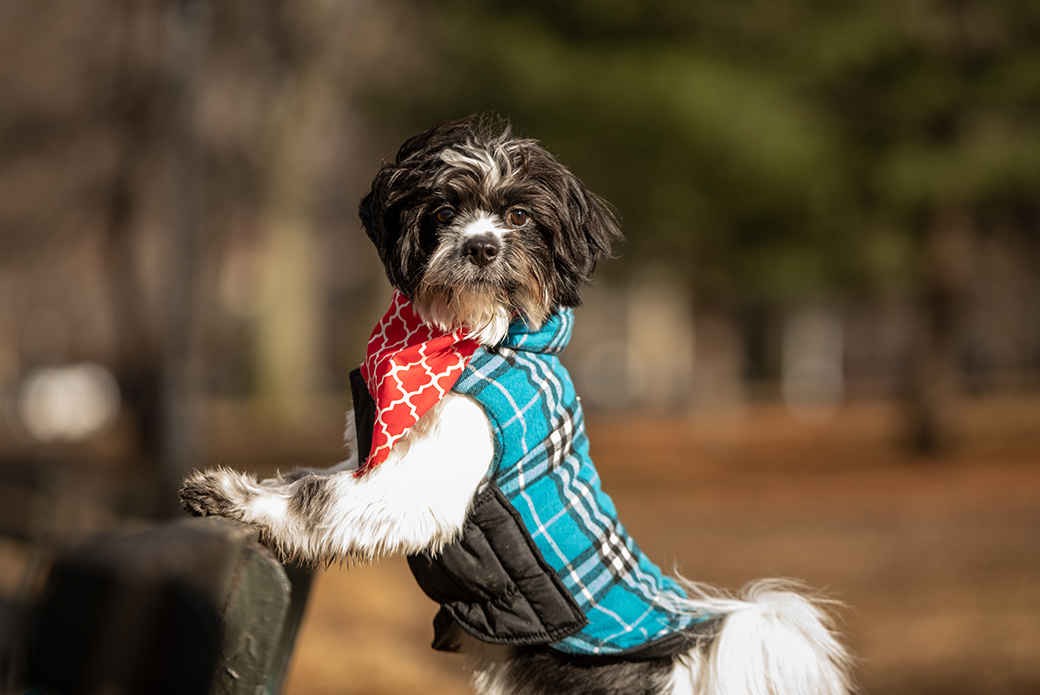 When asked if she would adopt again, Sara says “absolutely.”

“It’s so special to give a dog a second chance.”

Giving Back to Animals in Need

Elby and Wyoming’s stories are a reminder of just how far an animal can come and just how important is is to be there when animals like these need us. Both from unsafe, sad beginnings, these dogs found just where they were meant to be. Thanks to open-minded loving adopters and people like you, so many more of these stories are possible.

Thank you for all that you do for animals!