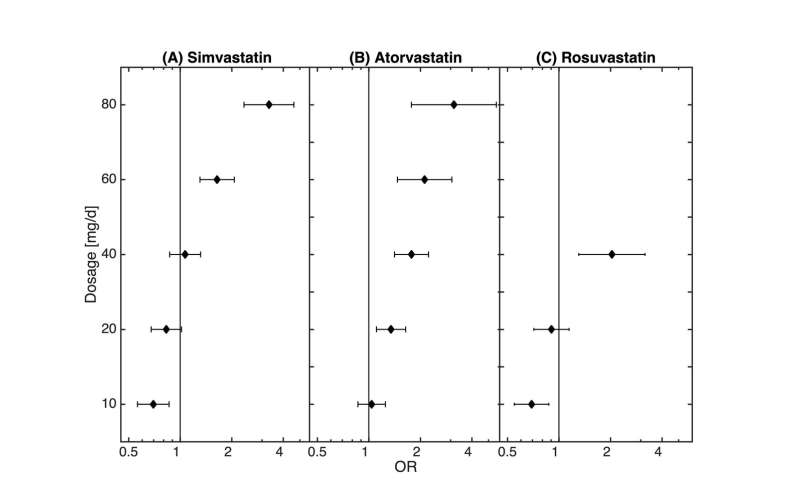 A study by the Medical University of Vienna and the Complexity Science Hub Vienna shows for the first time a connection between the dosage of cholesterol-lowering drugs—statins—and the diagnosis of osteoporosis.

At low doses, statins could protect against bone resorption. But the higher the dosage of cholesterol-lowering drugs, the greater the probability of osteoporosis, an analysis of millions of patient data by the Complexity Science Hub Vienna shows. The paper appears in the current issue of the top journal Annals of the Rheumatic Diseases.

Statins are among the most prescribed drugs worldwide. They lower high cholesterol and have been shown to reduce the risk of cardiovascular diseases. Less well-researched are complications in connection with the intake of statins, such as a possible influence on pathological bone resorption (osteoporosis).

Michael Leutner from the Clinical Department of Endocrinology and Metabolism at the Medical University of Vienna (MedUni), and first author of the study, explains the likely pathway. “Statins inhibit the synthesis of cholesterol from the liver. This lowers blood cholesterol. However, cholesterol is crucially important for many processes in the body.” Among other things, it is a basic building block for the production of sex hormones such as estradiol and testosterone.

“We know that low concentrations of sex hormones—especially the drop in estrogen levels during menopause—are the main cause for the increase of osteoporosis in women,” explains Alexandra Kautzky-Willer, an expert in gender medicine and endocrinology, and head of the MedUni team. “There is a similar relationship between bone density and testosterone. We were interested in whether the inhibition of cholesterol production by statins has an effect on bone formation and whether there could be a dose-response relationship.”

The higher the dosage, the stronger the effect

For their investigation, the research team used Big Data. “We had access to the health data of more than 7.9 million Austrians from 2006 and 2007,” says Caspar Matzhold from the Complexity Science Hub Vienna. Matzhold carried out the processing and statistical analysis of the data. “We filtered out from this big data set those who regularly took statins for at least one year,” he adds. Matzhold also calculated the daily dosage of statins and formed different dosage groups.

In a further step, the interdisciplinary team filtered out osteoporosis diagnoses. They found a correlation between the dosage of statins and the frequency of osteoporosis.

“In the lower-dose groups, there were fewer osteoporosis cases than expected,” Kautzky-Willer says. At doses up to 10 milligrams of the statins lovastatin, pravastatin, simvastatin or rosuvastatin, the scientists found fewer osteoporosis diagnoses compared to patients without statin therapy. “With doses of 20 milligrams and more, however, the tide seems to turn. We found more osteoporosis cases in patients treated with simvastatin, atorvastatin and rosuvastatin than expected,” explains Kautzky-Willer. The higher the dosage, the stronger the effect.

The trend also persisted after Matzhold had controlled the data for osteoporosis risk factors such as age, overweight, and other pre-existing conditions. The correlation was seen in both sexes.

“In earlier joint studies, we saw how helpful large data sets can be to examine open medical questions,” says Peter Klimek, leader of the data analysis team at the Complexity Science Hub Vienna and at the Medical University of Vienna. “The combination of medical expertise with our knowledge in big data analysis makes completely new insights possible.” According to Klimek, the newly discovered correlation between statin therapy and osteoporosis risk should now be investigated in clinical studies.