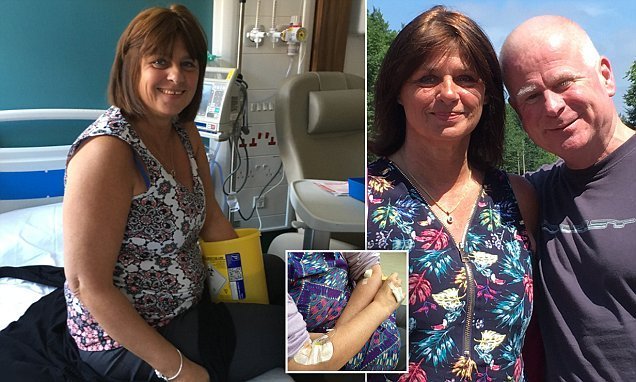 Bank manager, 55, had part of her vagina removed after doctors missed the signs of deadly bladder cancer and told her she had cystitis

A mother-of-three has revealed how her life was turned upside down when what she thought was a urinary tract infection turned out to be deadly bladder cancer.

Julie Morawaka, 55, visited the doctor repeatedly in 2016 with difficulty urinating, but was told she had cystitis, a common UTI, and given antibiotics.

But when she was still struggling months later, she demanded a scan which revealed a cancerous tumour had taken over half her bladder and she was given two years to live.

Ms Morawaka, a bank manager from Great Wakering in Essex, needed a 12-hour operation to save her life, in which surgeons cut out her womb, bladder and part of her vagina.

Despite nerve damage in her legs and pelvis, needing a catheter 24 hours a day, and a more difficult sex life, Ms Morawaka says she feels lucky to be alive.

During medical visits she did not have blood in her urine, a hallmark of bladder cancer, so feels her condition was dismissed as something less serious.

Ms Morawaka, who recently became a grandmother for the first time, is sharing her story to make people more aware of the need to spot signs of cancer early. Julie Morawaka, 55, was diagnosed with a UTI but did not recover for nearly a year. After demanding a scan she discovered she had bladder cancer

For nearly a year, Ms Morawaka, believed she had a urinary tract infection (UTI), only to discover in August 2016 she had an aggressive walnut-sized cancerous tumour.

The cancer was filling half her bladder and required immediate surgery or she would die – before her op in December 2016 she was given just two years to live.

But a gruelling surgery successfully removed the cancer – along with her bladder, womb and part of her vagina – and recent scans have revealed she is cancer free.

In January this year, Ms Morawaka celebrated the arrival of Myla, her first grandchild, something she once thought she would never live to see.

The mother-of-three said: ‘Meeting Myla was incredibly emotional for me.

‘After being diagnosed, I really never thought I’d see the day when I became a grandma.

‘Holding little Myla for the first time, everything that I thought was never going to happen suddenly became real.’ 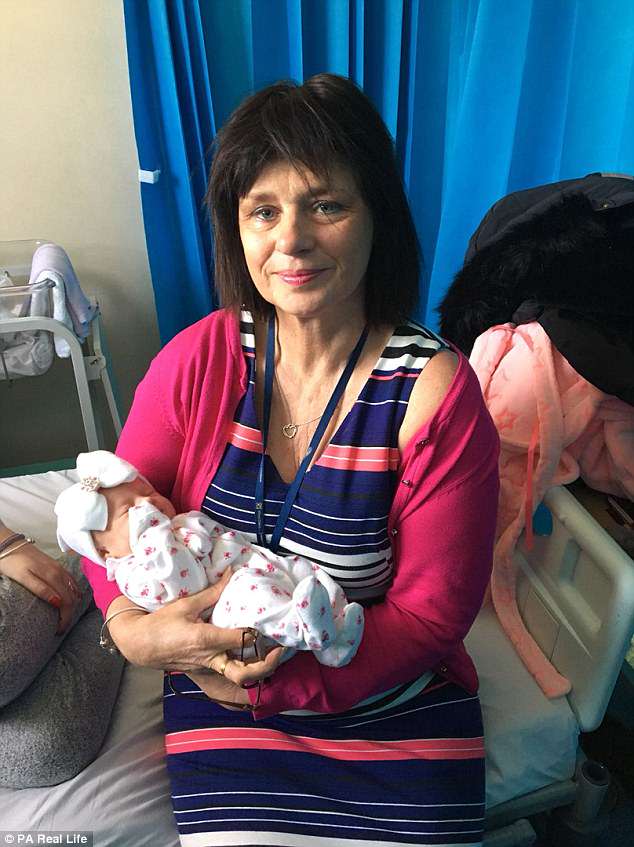 Ms Morawaka became a grandmother for the first time this year, to baby Myla – pictured at one day old

Ms Morawaka, a mother to Scott, 31, Sian, 27, and Danny, 22, first experienced problems passing water in December 2015 and was treated for cystitis – a common UTI.

But, as the months wore on with no obvious improvement, she started to worry.

‘I just wasn’t getting better and I didn’t think it was normal,’ said Ms Morawaka.

Didn’t have the tell-tale blood in her urine

‘It crossed my mind that it could be bladder cancer, but there wasn’t any blood in my urine, which is the classic sign.’

Urinating blood is the most common sign of bladder cancer and is usually painless, but it can also make people go to the toilet more often or cause burning when passing urine – both symptoms of UTIs, which are much more common.

Pelvic pain and weight loss are also symptoms of the disease, which affects around 10,300 people each year in the UK and over 81,000 a year in the US.

The survival rate of bladder cancer is around 50 per cent. Ms Morawaka was admitted to hospital in December 2016 when she had a 12-hour operation to remove her bladder, womb and part of her vagina

After demanding a scan she was told she had cancer

Eventually, in August 2016, by which time Ms Morawaka was taking strong doses of antibiotics, she pressed her doctor to send her for a full abdominal scan at Spire Hospital in Brentwood.

To her horror, it revealed a 5.5cm tumour, taking up more than half her bladder, which had started to burrow into the lining of her muscle tissue.

‘Because it was so aggressive, the doctors said I would have to have my entire bladder removed to give me the best shot at surviving,’ she said.

‘It was devastating news. It was such a shock, because for nine months I’d just thought I had a water infection. 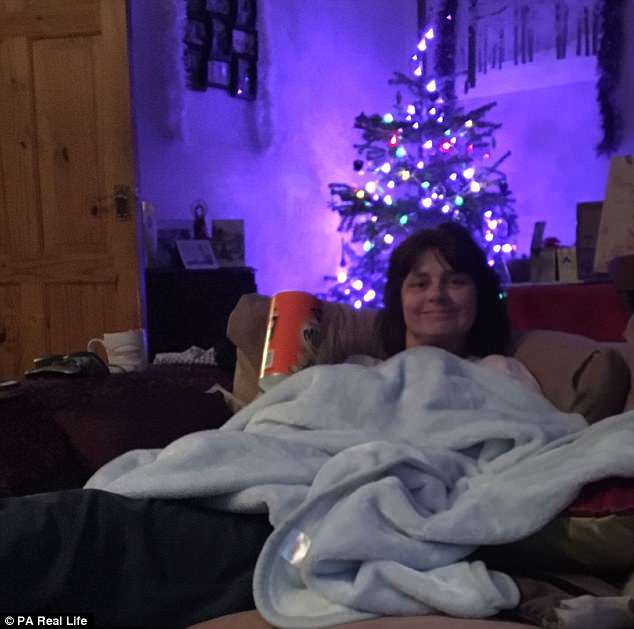 Ms Morawaka said her children refused to turn on the Christmas tree lights until she returned home from hospital and, when doctors said she could leave on Christmas Eve, they scrambled to put up a tree for her

‘My whole life really did flash before me and, immediately, I imagined the worst – my children living their lives without me.

‘Then reality kicked in and I realised that wasn’t an option – that I had to have the surgery, no matter how horrific, because I’d do whatever I could to keep living.’

‘I didn’t cry much but little things got to me’

WHAT IS BLADDER CANCER?

Bladder cancer is caused by a tumour developing in the lining of the bladder or the organ’s muscle.

It is the 10th most common cancer and accounts for about 3 per cent of all cases.

The cancer is more common in men and has a 10-year survival rate of about 50 per cent.

Symptoms of the disease include blood in the urine, needing to pee more often or more urgently than normal, pelvic pain, unexpected weight loss and swelling of the legs.

Anyone who ever has blood in their urine should see a doctor.

Smoking and exposure to chemicals in plastics and paints at work can increase the risk of getting bladder cancer.

Treatment varies depending on how advanced the cancer is, and may include surgery, radiotherapy or chemotherapy.

The news also came as a massive shock to her family – in particular to her eldest son, Scott, who had recently lost a close friend.

Ms Morawaka continued: ‘I think he thought that everyone was leaving him, so he seemed to take the news the hardest.

‘I didn’t cry much myself but, sometimes, little things got to me.’

The day before her operation at London’s Royal Marsden Hospital, performed by consultant urologist Pardeep Kumar, Ms Morawaka was setting up her out-of-office email response at the bank, when she suddenly broke down in tears.

‘I said to my colleague, “I don’t know what to write about when I’ll be coming back because I’m not sure if I will”.’

Released from hospital on Christmas Eve

Ms Morawaka had a 12-hour operation two weeks before Christmas in 2016, then spent two days in intensive care.

Meanwhile, her family waited on tenterhooks to see if she would be well enough to come home for the festive celebrations.

They vowed only to turn on the Christmas tree lights if she was there to join them on the big day.

‘The hospital only told me that I could go home on Christmas Eve, so, suddenly, my kids got into a mad panic – rushing around to try and find the lights!’ she said.

The operation was a success and within three months she was back at work.

But the radical surgery has taken its toll on Ms Morawaka, who now has an artificial bladder, fitted to a catheter which runs through her belly-button and has to be emptied regularly. 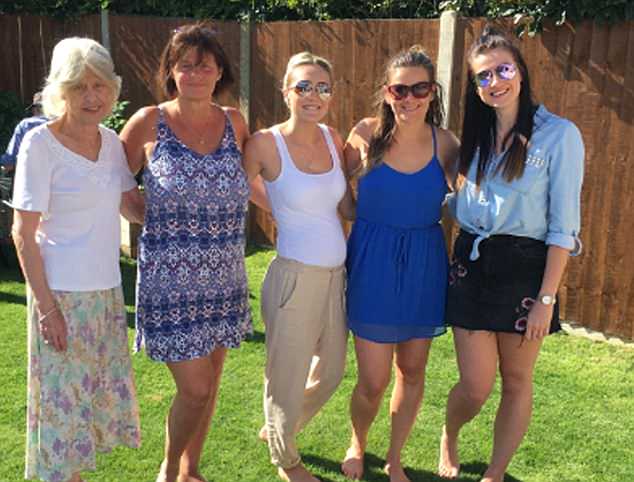 Ms Morawaka, pictured second from left with family and friends, says although her operation had bad effects she is grateful it saved her life 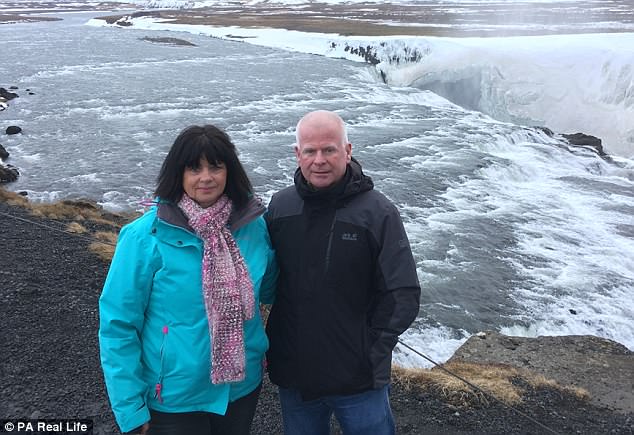 Ms Morawaka on holiday in Iceland with her partner Mike Griffin, 57

‘It means I’m always having to clock-watch and makes it tricky to go out anywhere for the day,’ said Ms Morawaka, who now has a 10in question mark-shaped scar across her stomach.

‘I have to carry a bag of medical supplies with me everywhere – even to the supermarket. I can never just take my keys and purse with me.’

Sex life has been ‘very difficult’ since the operation

Ms Morawaka has also candidly revealed the ordeal has taken its toll on her love life with partner Mike Griffin, 57, because part of her vagina had to be removed during the operation.

‘My love life has been made very difficult ever since,’ she revealed.

‘It’s not the same as it was. All the nerves have been taken away from that area, so I’m still very numb all around my legs, pelvis and tummy.

‘It’s also very painful, because things aren’t as lubricated as they were before. Ms Morawaka, pictured with partner Mike, says her sex life has become ‘very difficult’ since the operation because she has had ‘large chunks’ of her body taken away

‘I’ve essentially had large chunks of my body taken away, so not everything is still where it should be.

‘But, obviously, I have to offset that against the fact that I could be dead instead – so I always have to be thinking about that.’

With a previously clean bill of health, Ms Morawaka feels very unlucky to have been struck down by this type of cancer.

She said: ‘I don’t smoke, I’ve never worked in the paint or dye industry – all the sort of things you usually associate with bladder cancer. Ms Morawaka, pictured centre with friends, now wants to raise awareness about bladder cancer because she did not have the tell-tale sign of blood in her urine

‘It isn’t one of those cancers that gets talked about much, not in the same way as breast cancer or leukaemia.

‘It’s the Cinderella of cancers – the poor relation.’

Now Ms Morawaka, whose son Scott will be running the Royal Parks Half Marathon in October to raise money for the Royal Marsden Hospital, is keen to raise awareness of bladder cancer.

She said: ‘It’s so easy for people like me to have what they think is a water infection, only for it to turn out to be something much worse.

‘Doctors and nurses need to be made aware of all the symptoms of bladder cancer.

‘It’s easy just to write a prescription for antibiotics, assuming it’s a UTI, but they should be encouraged to look further.

‘If I’d had a scan just a few months earlier, some of this terrible ordeal that I’ve been through over the last 18 months might have been avoided.’

Previous: 9 Plus-Sized Pieces To Upgrade Your Activewear Collection
Next: Smokers are up to 45% more likely to suffer from irregular heart beats
Related posts
Pet Care News