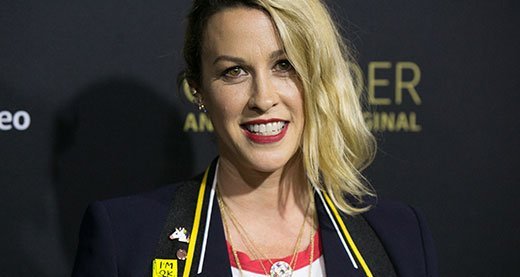 “There are days I’m debilitated to the point where I can barely move,” Alanis told People. “As a kid, I imagined having children and being with an amazing partner. This is a whole other wrench I didn’t anticipate.”

Alanis said she first experienced PPD after her son, Ever, was born more than six years ago. She immediately had symptoms, including intense physical pain, insomnia, lethargy, and “horrifyingly scary” visions of her family being harmed. However, she wasn’t given a diagnosis until 16 months after Ever’s birth.

there are absolutely no words that can speak to the joy and sweetness of these moments for me. xoxoxoxoxoxooxxo

Alanis says that she was prepared for her PPD to return and says that after she gave birth to Onyx it came back “seconds later.”

“It’s very isolating,” she said. “I’m used to being the Rock of Gibraltar, providing, protecting, and maneuvering. It had me question everything. I’ve known myself to be a really incredible decision-maker and a leader that people can rely on. [Now] I can barely decide what to eat for dinner.”

Alanis isn’t alone in her struggle: According to data from the Centers for Disease Control and Prevention (CDC), one in nine women suffer from postpartum depression.

While it may sound extreme that Alanis suffered from PPD immediately after having a baby, women’s health expert Jennifer Wider, M.D., says the disorder can show up any time in the first 12 months after giving birth.

“There aren’t many studies pinpointing the exact time of onset, but it is not uncommon for women to feel symptoms of PPD in the aftermath of the birth of their children,” she says.

Wider says the onset of PPD symptoms “varies wildly”—it could be any time from immediately after birth to several months later.

Alanis told People her PPD is “four times worse” this time, and she’s currently taking medication and homeopathic therapies, exercising every day, working with therapists, and making music. “I wrote many, many songs over the last three months,” she said. “It was a song a day. I had to start writing songs, or I was going to implode.”

thank god for all the sweetness in my life. thank god for this light, love, connection, passion, humanness, tenderness, community. love and deep care to all. xoxo #thankshealing

She also noted that her husband Mario “Souleye” Treadway has been supportive, but he “sometimes gets the dregs of my exhaustion at the end of the night,” she said.

“He’s doing the best he can. I just basically say to him, ‘There’s an end to this, and I’m in the middle of it. I’m so sorry for not being able to be who you typically know me to be.’ ”

“There are people who are like, ‘Where’s the old Alanis?’ and I just think, ‘Well, she’s in here. She’s having a minute,’” she said. “I just know that there’s a light at the end of the tunnel and try not to beat myself up.”

Previous: Experts Say This Could Be The Secret To A Good Night's Sleep
Next: 6 Real-Life Women Share Their Top Tips For Work Life Balance
Related posts
Pet Care News