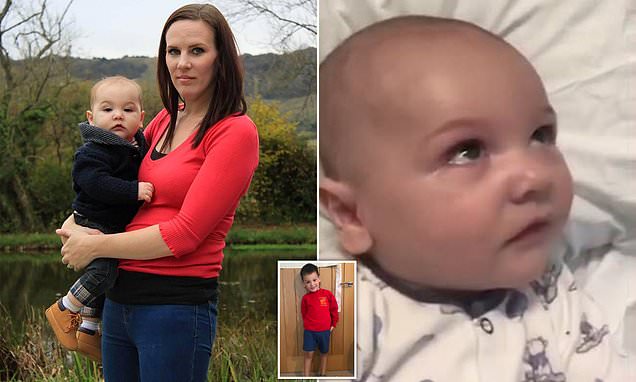 Could YOU tell this baby was having a seizure? Mother filmed her epileptic son’s subtle body jerks and eye rolls to prove to doctors he wasn’t just ‘tired’

A defiant mother filmed her son having epileptic seizures as proof to show doctors who dismissed his symptoms as tiredness.

Lisa Martin, 29, stormed into A&E armed with distressing footage of baby Benji’s eyes rolling back into his head and his body subtly jerking.

The video prompted medics to run a series of tests which confirmed he had a form of epilepsy known as infantile spasms.

It affects one in 2,000 children and causes a cluster of mini seizures that make the body suddenly stiffen.

If left untreated, the disorder can cause permanent brain damage, autism and even death.

The family of three-year-old Benji, who was four months at the time, were told by their GP his symptoms were caused by fatigue.

Mrs Martin, from Hassocks, West Sussex, is now sharing the video for the first time so other parents can spot signs of the seizures in babies before it’s too late. 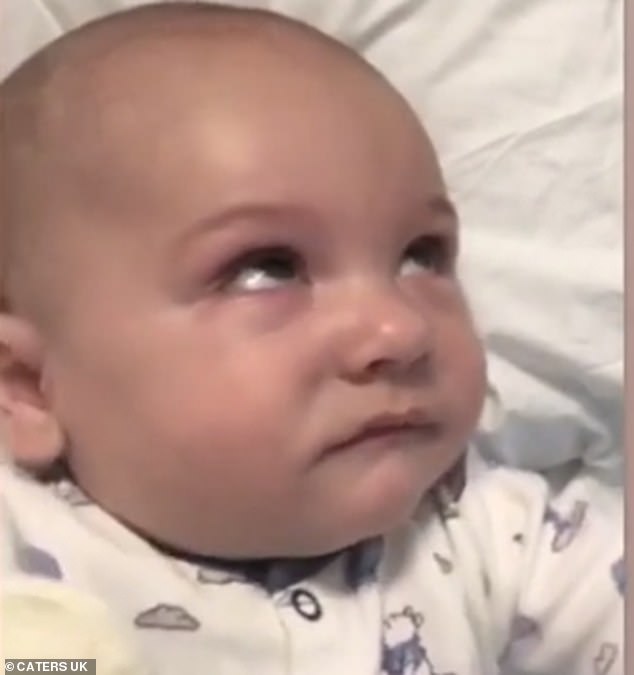 Benji Martin’s eyes roll back into his head and his body freezes as he suffers a seizure. The footage was used to convince medics to run a series of tests 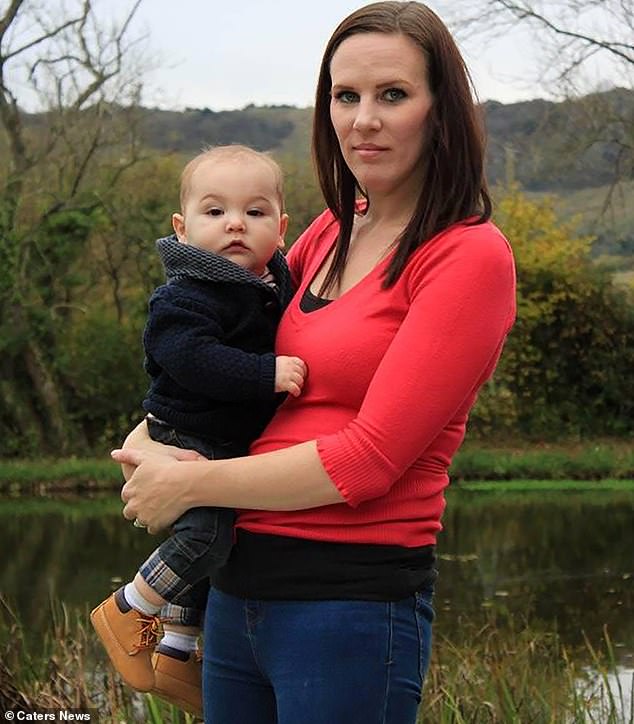 Lisa Martin, 29, with son Benji as a baby shortly after he was diagnosed with infantile spasms 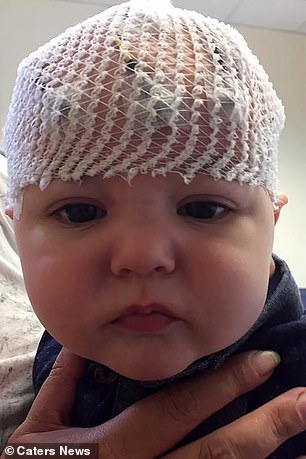 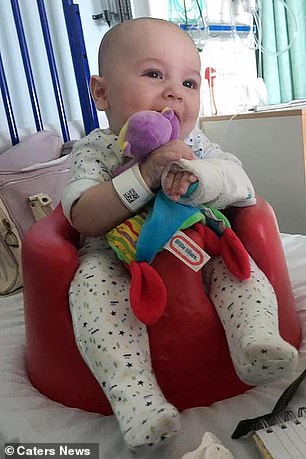 His mother took the video to A&E which prompted medics to run a series of tests (left, having a brain scan, and right, playing during his hospital stint) which confirmed he had a form of epilepsy

She said: ‘Benji was perfectly healthy until he reached four and a half months old. We were visiting family and we noticed him doing an eye lift movement that seemed to disturb him.

‘So the next morning I booked him in to see a GP and whilst there he did a few repetitive eye movements – the GP said he was probably suffering with fatigue and that it would stop.

‘Yet the movements continued throughout the day and when my husband, James, returned from work that evening we decided to head to our local children’s A&E department armed with a video to share our concerns.

‘For us the movements were terrifying and were showing something out of our control.

Infantile spasms – also known as West syndrome – is a form of epilepsy that occurs in one in 2,000 children.

The seizure condition is typically detected in the first year of life.

IS can be difficult to diagnose because the seizures are often hard to notice and often only last about a second or two.

During a spasm, the body stiffens suddenly, the back may arch, and the arms, legs and head may bend forward.

They commonly occur right after a baby wakes up and often come in clusters, with each spasm five to 10 seconds apart.

Infantile spasms tend to disappear as a child gets older but, by then, they may have led to some degree of permanent brain damage.

This can cause problems such as moderate to severe intellectual disability, epilepsy that does not respond to medication, and autism.

It’s important for infantile spasms to be identified as early as possible, as early treatment markedly reduces the risk of brain damage.

‘Yet Benji appeared fine in himself, and his usual cheery self but they took a look at the video anyway.’

The former teaching assistant added: ‘Things could have been so different and so much worse had we had listened to that first doctor and put it down to fatigue.

‘The delays in diagnosis tend to lead to poorer outcomes as the longer the brain is chaotic the more damage is done.

‘That’s why we’ve decided to share the video as the quicker the diagnosis the better.’

Benji was kept in hospital overnight in August 2016 after doctors were handed the video.

During the night his jolts and eye rolls became stronger and more aggressive, with doctors counting around 80 of them having occurred in that one night.

The youngster was taken for an urgent EEG – a test that measures brainwave patterns – which revealed he had infantile spasms, also known as West syndrome.

Mrs Martin added: ‘Things became a blur – Benji was inundated with tests. He was sedated and had an MRI scan, lumbar puncture, bloods taken and started a steroid medication called Prednisolone.

‘The medication was so tough on our poor boy, he screamed daily for 24 hours a day and nothing would settle him.

‘After a month of this, he had lost many skills he had learned before onset of the spasms, he never smiled and was no longer a happy baby.

‘His face had ballooned from his previous round of steroids and it was like having our baby replaced with someone else.

‘Benji started a new round of steroids meaning he had all the effects again, screaming and crying for all hours of the day.

‘Yet the combination worked and it was decided Benji would stay on an epilepsy maintenance medication called sodium valproate and Epillim.’ 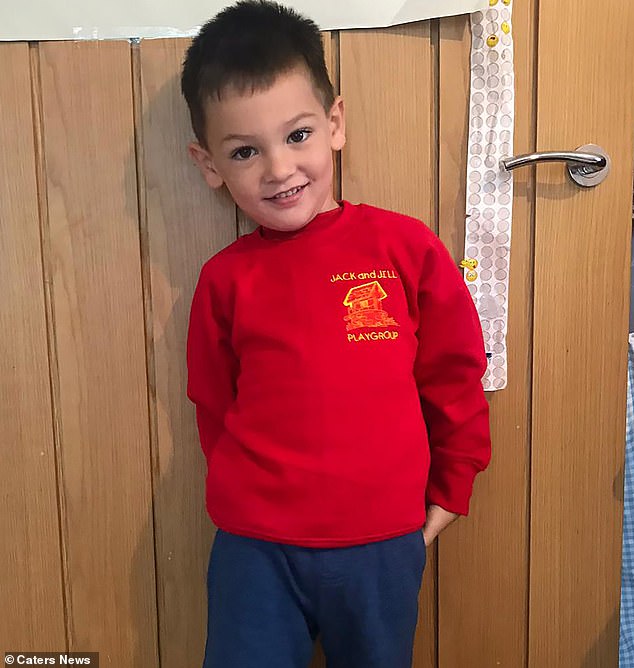 Benji, who is now three, has started pre-school and his tics are under control. But the epilepsy has caused learning disabilities that he battles on a daily basis 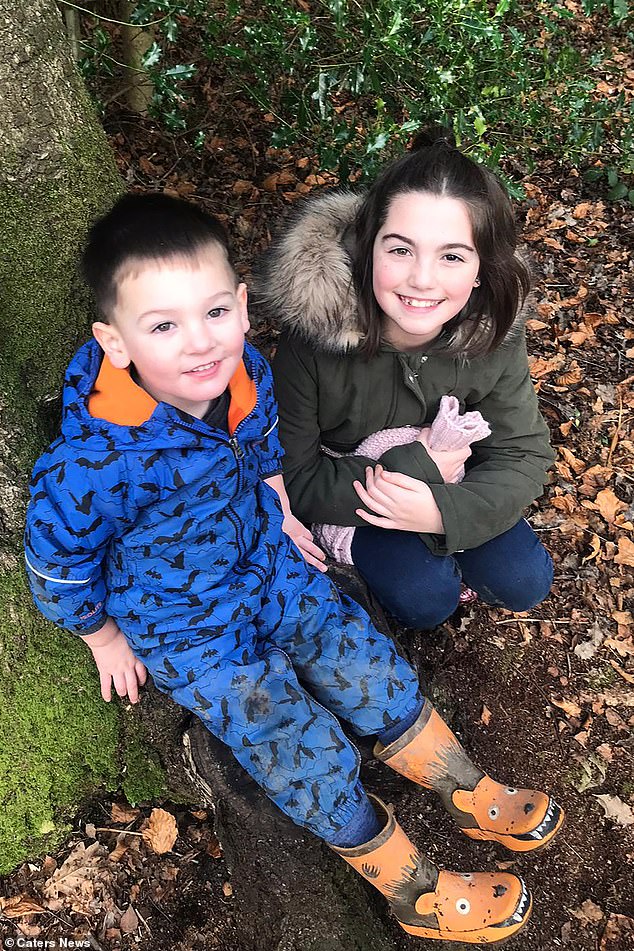 The youngster, from Hassocks, West Sussex, is pictured with his half sister Leila

After years of tinkering with his medication to see what he responded best to, Benji’s seizures are now under control. But the condition has caused delays in his learning.

Mrs Martin added: ‘He’s worked so hard to be where he is aged three and we’re lucky as he can now attend a local playschool where he seems happy and fits in well.

‘His speech is very much delayed and he doesn’t cope well with many situations, needing help with all personal care and awareness.

‘Taking him outside can be extremely scary and difficult as he would give half the chance just run out into the road to touch moving cars.’

The family were on high alert after having their second son, Joey, one, last year and would constantly check him for any subtle eye movements.