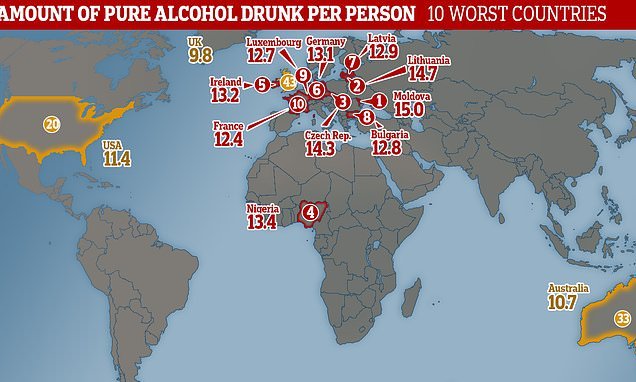 Britons are drinking LESS alcohol than they did 10 years ago despite rising rates across the world ‘because health conscious youngsters are shunning the habit’ (so how much do people drink each year in your country?)

Britons are drinking less alcohol than they did ten years ago – despite rising rates across the world.

Adults consumed 6.5litres of pure alcohol globally in 2017, on average. This is up from the 5.9litres recorded back in 1990.

Experts believe this is being driven by young people, the ‘millennial’ generation, who tend to be far more restrained in their drinking habits than older groups.

The findings come amid figures showing young Britons are increasingly shunning alcohol, with one in three 16-24 year olds now admitting to ‘never drinking’.

The US saw a slight increase in alcohol consumption, from 9.3litres to 9.8litres. The researchers did not explain why it recorded a small jump. 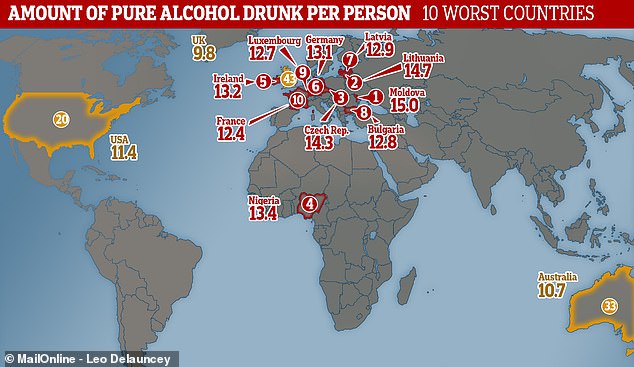 At country-level, Moldova had the highest alcohol intake (15litres per adult per year), and Kuwait had the lowest (0.005litres per person per year).

Researchers say the overall spike is being driven by countries such as India, with strict regulations discouraging drinking in many Western nations.

Scientists analysed the alcohol consumption of 189 nations between 1990 and 2017, and used the trends to estimate the intake for 2030.

The findings, published in a prestigious medical journal, reveal the Seychelles saw the biggest spike, recording a jump of around 90 per cent.

Data showed adults living on the archipelago consumed 12litres of pure alcohol in 2017, on average. In comparison, the amount was 6.3litres in 2010.

Vietnam (89 per cent), Lao People’s Democratic Republic (51 per cent), Swaziland (50 per cent) and Trinidad and Tobago (31 per cent) all also saw major spikes.

The biggest drop was in the Eastern European nation of Belarus, where consumption plummeted 38 per cent from 17.5litres to 10.9litres.

‘Before 1990, most alcohol was consumed in high-income countries, with the highest use levels recorded in Europe… However, this pattern has changed substantially.’ 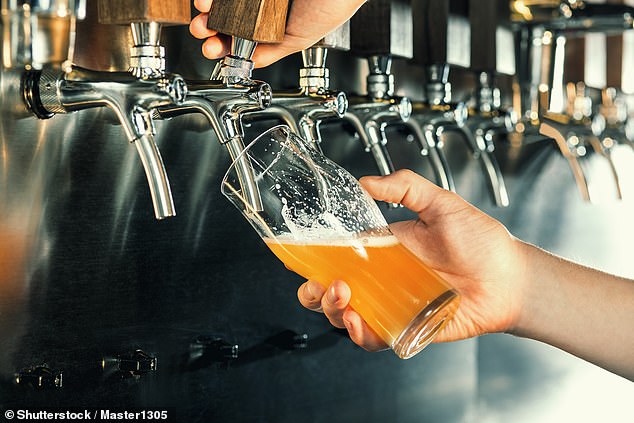 Alcohol is causally linked to over 200 diseases, including many types of cancer, liver disease and heart disease

HOW MUCH ALCOHOL SHOULD YOU DRINK?

The NHS advises men and women not to drink more than 14 units a week on a regular basis – such as weekly – to avoid health risks.

For example, a large glass of wine contains around three units, while a bottle is closer to the 10 mark. A pint of beer is around 2.3.

More than 16,000 now die every year in Britain from liver disease, which is most often caused by excessive drinking. This is twice the number who died from it in 1991.

Regular drinking also increases calorie consumption and can contribute towards obesity and cause type 2 diabetes, which affects millions across the world.

And alcohol is now the sixth most common cause of disability among people in their 50s and 60s, up from 16th in 1990, Public Health England data shows.

Around 88,000 deaths each year in the US are thought to be caused by excessive alcohol consumption.

He added that large reductions have been seen across Eastern Europe and vast increases in several low and middle-income countries such as China, India, and Vietnam.

Mr Manthey said: ‘This trend is forecast to continue up to 2030 when Europe is no longer predicted to have the highest level of alcohol use.

‘Based on our data, the WHO’s aim of reducing the harmful use of alcohol by 10 per cent by 2025 will not be reached globally.

‘Instead, alcohol use will remain one of the leading risk factors for the burden of disease for the foreseeable future, and its impact will probably increase relative to other risk factors.

‘Implementation of effective alcohol policies is warranted, especially in rapidly developing countries with growing rates of alcohol use.’

Alcohol is causally linked to over 200 diseases, including many types of cancer, liver disease and heart disease.

The research, published in The Lancet, used data from the Global Burden of Disease study – considered to be the most comprehensive global dataset.

The estimates for 2030 took into account GDP projections of each country and their religious composition. Islam and Buddhism both discourage alcohol.

ARE BRITISH TEENS TURNING THEIR BACK ON ALCOHOL?

Britain was once notorious for being a nation of young binge-drinkers. But a change in trend has been noticed in the past few years.

Young British people are increasingly shunning alcohol, data suggests, amid suggestions that being fit and healthy is more important.

University College London researchers last year published an analysis of data from almost 10,000 people who were aged between 16 to 24.

A report by the think tank Demos in 2015 found 42 per cent of youngsters say they spend too much time on social media to drink alcohol.

Some 35.7billion litres of alcohol was consumed in 2017, up from the 21billion in 1990. Population growth accounts for a large percentage.

In 2017, the lowest alcohol intakes were in North African and Middle Eastern countries – typically less than one litre per adult per year.

While the highest intakes were in Central and Eastern European countries, which, in some cases, recorded more than 12litres per adult per year.

At country-level, Moldova had the highest alcohol intake (15litres per adult per year), and Kuwait had the lowest (0.005litres per person per year).

Over the same time period, the researchers also measured the proportion of people who did not drink or were binge-drinkers.

The prevalence of lifetime abstinence dropped from 46 per cent to 43 per cent between the start and the end of the study.

In comparison, the rates of current drinkers jumped two per cent to 47 per cent and the proportion of binge drinkers went from 18.5 to 20 per cent.

The researchers estimate that, if current trends continue, almost a quarter (23 per cent) will binge drink once a month by 2030.

And, if nothing changes, adults across the world will drink 7.6litres of pure alcohol each day – the equivalent of 410ml of beer per day.

However, the team said that their projections are based on surveys, where individuals often lie and say they drink less than what is true.

A spokesperson from the Alcohol Information Partnership said: ‘Drinking levels in the UK have been falling for more than a decade with more people now drinking responsibly than harmfully.

‘This fall reflects our changing relationship with alcohol with the old negative stereotypes increasingly a thing of the past.’

DO YOU DRINK TOO MUCH ALCOHOL? THE 10 QUESTIONS THAT REVEAL YOUR RISK

One screening tool used widely by medical professionals is the AUDIT (Alcohol Use Disorders Identification Tests). Developed in collaboration with the World Health Organisation, the 10-question test is considered to be the gold standard in helping to determine if someone has alcohol abuse problems.

The test has been reproduced here with permission from the WHO.

To complete it, answer each question and note down the corresponding score.

0-7: You are within the sensible drinking range and have a low risk of alcohol-related problems.

Over 8: Indicate harmful or hazardous drinking.

8-15: Medium level of risk. Drinking at your current level puts you at risk of developing problems with your health and life in general, such as work and relationships. Consider cutting down (see below for tips).

16-19: Higher risk of complications from alcohol. Cutting back on your own may be difficult at this level, as you may be dependent, so you may need professional help from your GP and/or a counsellor.

20 and over: Possible dependence. Your drinking is already causing you problems, and you could very well be dependent. You should definitely consider stopping gradually or at least reduce your drinking. You should seek professional help to ascertain the level of your dependence and the safest way to withdraw from alcohol.

Severe dependence may need medically assisted withdrawal, or detox, in a hospital or a specialist clinic. This is due to the likelihood of severe alcohol withdrawal symptoms in the first 48 hours needing specialist treatment.

Previous: Meghan Markle Was 'Whisked Off' To A Hospital In Secret When Her At-Home Birth Plan Failed
Next: From nosebleeds to dehydration, how to save your life in an emergency
Related posts
Pet Care News