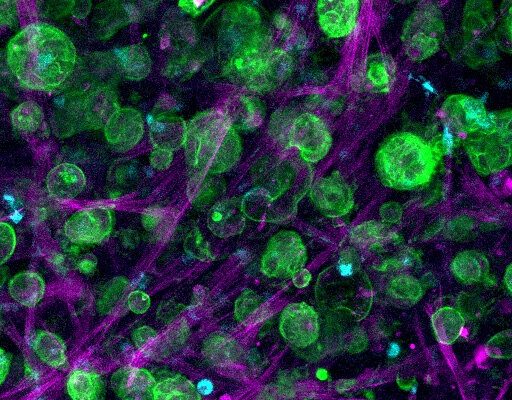 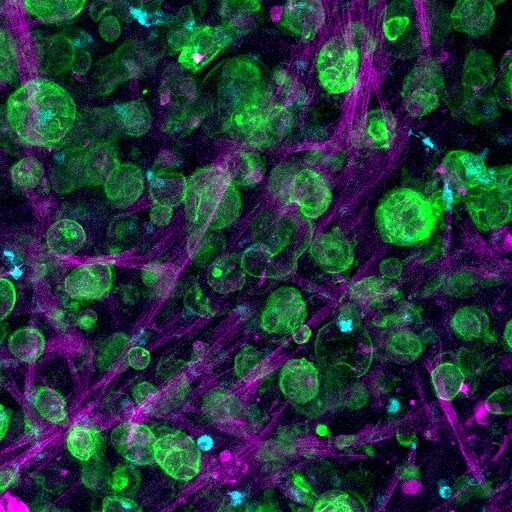 An international team of scientists have created a three-dimensional (3-D) pancreatic cancer tumour model in the laboratory, combining a bioengineered matrix and patient-derived cells that could be used to develop and test targeted treatments.

In a new study published today in Nature Communications, researchers from the University of Nottingham, Queen Mary University of London, Monash University and Shanghai Jiao Tong University have created a multicellular 3-D microenvironment that uses patient-derived cells to recreate the way tumour cells grow in pancreatic cancer and respond to chemotherapy drugs.

Pancreatic cancer is very difficult to treat, particularly as there are no signs or symptoms until the cancer has spread. It can be resistant to treatment and the survivial rate is low compared to other cancers, with only a 5-10% survival rate five years after diagnosis.

The study was led by Professors Alvaro Mata from the University of Nottingham (UK), Daniela Loessner from Monash University (Australia) and Christopher Heeschen from Shanghai Jiao Tong University (China). Dr. David Osuna de la Peña, a lead researcher on the project, said: “There are two main obstacles to treating pancreatic cancer—a very dense matrix of proteins and the presence of highly resistant cancer stem cells (CSCs) that are involved in relapse and metastasis. In our study, we have engineered a matrix where CSCs can interact with other cell types and together behave more like they do in the body, opening the possibility to test different treatments in a more realistic manner.”

There is a need for improved 3-D cancer models to study tumour growth and progression in patients and test responses to new treatments. At present, 90% of successful cancer treatments tested pre-clinically fail in the early phases of clinical trials and less than 5% of oncology drugs are successful in clinical trials.

Pre-clinical tests mostly rely on a combination of two-dimensional (2-D) lab grown cell cultures and animal models to predict responses to treatment. However, conventional 2-D cell cultures fail to mimic key features of tumour tissues and interspecies differences can result in many successful treatments in animal hosts being ineffective in humans.

Self-assembly is the process by which biological systems controllably assemble multiple molecules and cells into functional tissues. Harnessing this process, the team created a new hydrogel biomaterial made with multiple, yet specific, proteins found in pancreatic cancer. This mechanism of formation enables incorporation of key cell types to create biological environments that can emulate features of a patient’s tumour.

Professor Mata adds: “Using models of human cancer is becoming more common in developing treatments for the disease, but a major barrier to getting them into clinical applications is the turnaround time. We have engineered a comprehensive and tuneable ex vivo model of pancreative ductal adenocarcinoma (PDAC) by assembling and organising key matrix components with patient-derived cells. The models exhibit patient-specific transcriptional profiles, CSC functionality, and strong tumourigenicity; overall providing a more relevant scenario than Organoid and Sphere cultures. Most importantly, drug responses were better reproduced in our self-assembled cultures than in the other models.