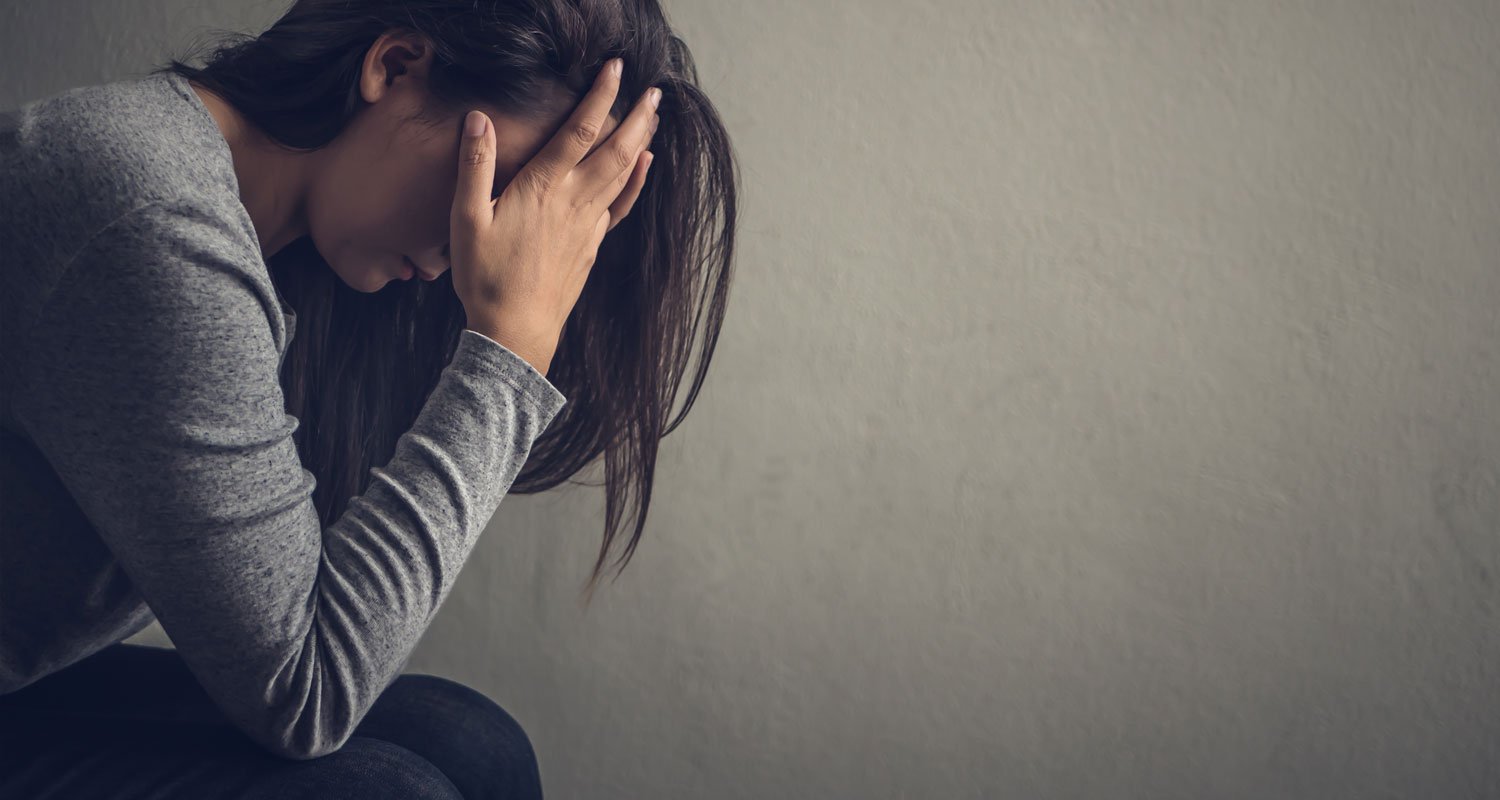 I’ve lost count of the number of times people have told me how strong I am. Considering I rarely set foot in a gym and my body bears the signs of having carried three children, I’d be surprised if they meant physically so. Rather, they’re talking about the resilience I’ve shown since losing my mum to cancer in 2016.

The tragedy is, everybody will experience grief at some point or another. And even more distressing is that it seems to be more difficult to process than other negative emotions. Why? Because serious loss doesn’t just affect the way you feel – it has a very real effect on the workings of your body, too.

“While each of us deals with grief in our own way – which makes it all the more difficult to study this kind of complex and nuanced emotion – we know it causes tremendous confusion and, often physical, pain,” explains neuroscientist Dean Burnett, author of The Idiot Brain. “The consequences are not metaphorical. Grief is a trauma, and your body’s automatic response to that is to flood its system with cortisol, which can have harmful effects. The brain is forced to try to return to normal functioning and this can take considerable time.” All this certainly rings true for me. Although while the stages of grief seem to be common knowledge – denial, anger, bargaining, depression and acceptance – there’s no fixed timeline to follow. It’s like a pendulum, forever swinging back and forth between them all.

Experts believe grief hits us so hard because we process the loss as a rejection – a tie or relationship severed forever in a way that we can’t exert any control over. “When someone rejects us, even in a minor way, studies have shown that it’s processed in the same regions of the brain that deal with pain,” says Burnett. “While recent evidence suggests that it’s more ‘psychic’ pain than the physical kind we experience, it’s just as miserable.” And it’s not simply the loss of that one person you have to process, but the effect this has on your own identity. “Brain scans show that when participants are asked to think of those people closest to them and the groups in which they feel a sense of belonging, this triggers activity in the same parts of the brain that hold information related to your sense of self,” says Burnett. “Essentially, the people you surround yourself with become a big part of who you are and how you see yourself.” The consequence? When someone intertwined with your character passes away, it causes huge damage and disruption to all these neurological processes and all your expectations and understanding of how life works. And this causes serious uncertainty and stress for the typical brain.

That explains the feeling that, with my mum’s death, a part of me disappeared, too. A mummy’s girl from the off, I looked like her, thought like her, doted on her. I spoke to her every day, we’d meet for dinner at least once a week and she was a constant source of support, both emotionally and practically, when I became a mother myself. When her illness hit and the gruelling chemotherapy took its toll, I planned my entire life around her hospital stays; I all but felt the pain etched on her face as the drugs tried to save her life.

It wasn’t to be – and when she died, I was left heartbroken alongside my dad and sister. It’s easy to assume that having others to share the experience with would be some comfort, that we could all band together to get through it, but it’s too facile a way of thinking. If anything, the pain seemed to multiply because I knew they were hurting as well. Experts agree that when it comes to the grieving process, it’s anything but a simple case of ‘a problem shared is a problem halved’. “When someone integral to a family unit dies, that whole system turns on its axis,” explains psychotherapist Julia Samuel, author of Grief Works. “Each person is grieving in their own way and the experience demands a complete recalibration of dynamics to continue on to find a new normality.” Yes, to empathise with each other is crucial, but Samuel suggests that grief differs from other personal experiences, like depression and anxiety, because it may not be wise to turn to those closest to you – those you’d usually confide in. “There’s a risk that more than one person drowning in loss can actually be a hindrance. Open communication is key, but it’s important at times to recognise that you have to look further out for support, beyond those who are grieving for the same person you are.”

A friend in need

This is when friends come into their own. Never have my female friendships been so vital, and stretched to such an extent. And, unfortunately, some haven’t passed the test. “You can’t be angry at the person you’ve lost for what they’ve left behind, so some of this fury is displaced,” says Samuel. “Then it becomes existential disappointment when you recognise that others may let you down when you need them most. You’re already grieving for the future you feel you’ve been denied, so there are a lot of echoed feelings when friends fail to live up to
your expectations.” For Vaijayanti Drumm, a consultant who works in the mental health space, the issue lies in friends’ unwillingness to let down their own defences. “Human beings mirror each other – we are in a constant feedback loop,” she says. “So when someone is grieving, in order to empathise, we need to mirror and feel the range of negative emotions that our friend is experiencing. This makes us feel vulnerable and out of control. But, in avoiding this, we can end up being dishonest in how we communicate. We try to say the right words but our body language gives us away, and this dishonesty in communication means we don’t always deliver for the grieving person.”

I understand that this past year has been difficult for my friends and colleagues just as it has been for me – though I don’t always have the headspace to appreciate it fully. There’s still a sense of taboo and awkwardness around grief, far more than other uncomfortable situations or feelings. A stiff-upper-lip mentality and our inherent fear of dying means the topic is almost off the table. As Samuel says, “cultures that are more open than ours are certainly helpful in times like these”. In part, people worry that by mentioning what’s happened, they’ll make things worse (honourable intentions, yes, but personally it’s more upsetting to feel as if my loss is being brushed under the carpet), or they don’t know what to say, so choose to say nothing at all.

Over time, I’ve naturally adjusted to drip-feeding myself bite-sized fragments of pain: memories of the diagnosis, those final few months, weeks and days before her death or the instability of the aftermath. Then, before the tears take hold, I shut them down and return to distraction and activity to keep the sorrow from suffocating me. “We have defences for a good reason,” says Samuel. “It’s about letting your system do what it needs to do. Incrementally, every time you move between expressing your sadness, and finding things that calm you, you adjust a little bit more to this reality that you don’t want to be true. You can’t bear witness to the full actuality to begin with, so it becomes a slow adjustment over time.”

This oscillation between flirting with the loss and seeking respite from the hurt it brings is one of the most respected theories in studies of grief: the dual process model of coping. “We can’t stay with the pain too long, so we move towards restoration instead,” says Samuel. “But then, when ready, we move back to the pain in order to confront it. By moving in and out of the intense grief, with key periods of distraction, the reality of the loss can be tackled in more manageable doses.” This constant back-and-forth is one of the worst things about grief – any time I’ve felt like I’m getting somewhere, I then hit a particularly dark period.

No wonder, then, that grief retreats exist, here and overseas. Loss expert and social worker Donna Lancaster co-founded The Bridge in the UK – a five-day healing experience that combines meditation, visualisation, journaling, group sharing and ritual. It’s based on the renowned and widely used Grief Recovery Method and research undertaken by Harvard University, which concluded that ritual when grieving – albeit widely varied by culture and religion – helps sufferers to regain feelings of control. Focusing not solely on the bereaved, but also loss related to divorce and separation, betrayals of trust and struggles around identity, participants are encouraged to find ways to turn their pain into a positive. “If you don’t tell your story, you’ll show it physically,” says Lancaster. “I’ve seen so many people’s unprocessed pain leak out as anger and get stuck in rage and fury, which then has a massive impact on their own wellbeing. Once they begin processing grief in a way that resonates with them, at their own pace, physical issues including digestive problems, migraines, back pain and rigid posture can lessen and even disappear completely.”

So, is grief something that you should aim to ‘get over’? “In terms of the human brain, it can adapt to anything over time,” says Burnett. Although life won’t ever go back to the way it was, eventually your body will resume ‘normal’ operations. “The brain works by processing actions and outcomes, so if you do something for long enough and it proves to have no noticeable outcome – for example, you feel pain but that suffering doesn’t result in the person coming back and the connection being repaired – it will learn to accept this.”

From a psychological point of view, the process is a little different. “You don’t get over grief – but you’ll learn how to take the pain, feel the emotions and express them in a healthy way,” says Lancaster. “Our aim on the retreat is to help people to process these emotions. Grief itself cannot become anything other than what it is, but by allowing yourself to grieve properly, facing the range of emotions head-on, the loss can be turned into a positive experience.”

While it might seem incomprehensible that there could be any bright side to such grave pain, it’s a theory that Samuel attests to as well. “When you allow yourself to live with what you first find impossible to comprehend, there is a sense of growth. By being able to recognise that life involves pain, as well as joy, your experience in this world deepens. Compassion can deepen – you may find you’re more able to empathise with others – and your perception of what matters, and more importantly what doesn’t, can change entirely,” she says.

What I’m coming to realise is that these feelings of grief are the price you pay for the love and joy that came before them. Yes, bad things happen in life, and tomorrow holds no guarantees, so it’s crucial that I live my life in a way that would make my mum proud. Whether she’s here to bear witness to what I do or not, I’m learning to find great solace in knowing that, even after her death, the values she held dear are the ones I’m doing my very best to uphold.

This article originally appeared in the June issue of Women’s Health.

Previous: Obesity + aging linked to Alzheimer’s markers in the brain: Study finds most neurodegeneration in hippocampus of overweight, middle-age mice
Next: The Ultimate Beginners Guide To Training For A Marathon
Related posts
Pet Care News