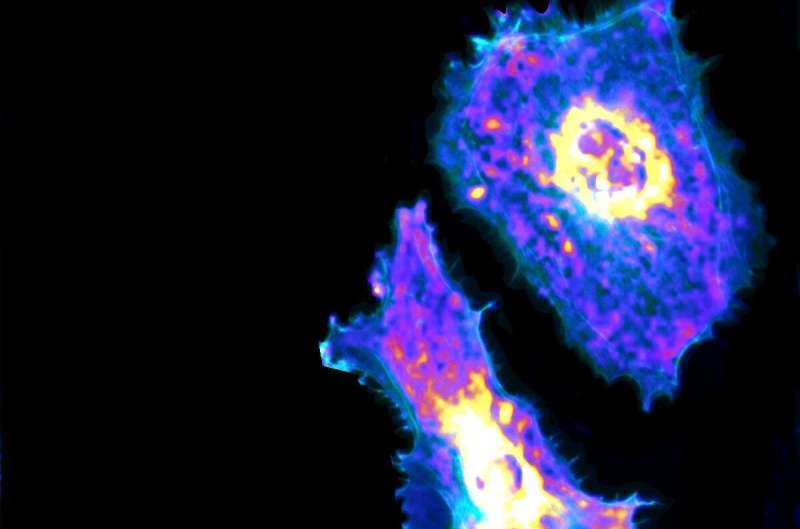 Understanding cellular metabolism—how a cell uses energy—could be key to treating a wide array of diseases, including vascular diseases and cancer.

While many techniques can measure these processes among tens of thousands of cells, researchers have been unable to measure them at the single-cell level.

Researchers at the University of Chicago’s Pritzker School of Molecular Engineering and Biological Sciences Division have developed a combined imaging and machine learning technique that can, for the first time, measure a metabolic process at both the cellular and sub-cellular levels.

Using a genetically encoded biosensor paired with artificial intelligence, the researchers were able to measure glycolysis, the process of turning glucose into energy, of single endothelial cells, the cells that line blood vessels.

They found that when these cells move and contract, they use more glucose, and they also found that cells uptake glucose through a previously unknown receptor. Understanding this process could lead to better treatments for cancer and vascular diseases, including COVID-19.

“Understanding cellular metabolism is universally important,” Huang said. “By measuring single-cell metabolism, we potentially have a new way of treating a wide range of diseases.”

“This is the first time that we can visualize cellular metabolism at different temporal and spatial scales, even at the subcellular level, which could fundamentally change the language and approach for researchers to study cellular metabolism,” Fang said.

Endothelial cells normally provide a tight layer inside blood vessels, but they can contract, leaving gaps within this layer, when they need help from the immune system. Abnormal contraction can cause leaky blood vessels, leading to heart attack or stroke. Such contraction in blood vessels around the lungs can also cause fluid to leak in, which happens in the case of acute respiratory distress syndrome. (This often occurs in patients with severe cases of COVID-19.)

To better understand how cells metabolize energy to fuel this contraction, the researchers turned to Förster resonance energy transfer sensors—genetically encoded biosensors that can measure the amount of lactate inside cells. Lactate is the byproduct of glycolysis.

Though the researchers did not create the sensors, by pairing the sensors with machine learning algorithms, they created an even more powerful technique that allowed them to image cells, analyze the data, and parse out glycolysis reactions at the cellular and subcellular levels.

“Now we can look at and understand details within the cells, like certain areas of cells where there is an increase of glycolysis,” Fang said. “This is a key technological innovation.”

They were able to measure just how much glucose cells used when they contracted and moved, and they also found a new mechanism of glucose transport mediated by the cell’s cytoskeleton—a receptor called GLUT3—that these cells use to uptake glucose.

Understanding how glycolysis works at the cellular level could ultimately lead to treatments that inhibit this process when beneficial—in the case of leaky blood vessels in patients with atherosclerosis, for example. It could also help patients whose immune systems are overreacting to COVID-19, for example, and need help closing the gaps within their endothelial cells around their lungs.

“If we can find a way to inhibit contraction, we could lessen the acute respiratory distress syndrome in COVID-19 patients,” Fang said.

It also has important implications in treating cancer. Endothelial migration and proliferation, driven by glycolysis, are major cellular processes involved in vascular growth, which is necessary for tumor survival and growth. Understanding just how this works could help researchers both destroy tumors and inhibit tumor growth.

It could also be useful in CAR T-cell therapy, which recruits the body’s own immune system to fight tumors. While the therapy has been lifesaving for some, many patients don’t respond to it. Since endothelial cells are important for allowing T-cells to infiltrate tumors and cellular metabolism is instrumental to T-cell functions, researchers believe that modulating cellular metabolism could help create a better immunotherapy system.

Tags: first, For, researcher, the, Time

Previous: “Do I need to wear weightlifting shoes?”
Next: How Long Does It Take to See Results From Working Out? Fitness Experts Weigh In
Related posts
Pet Care News