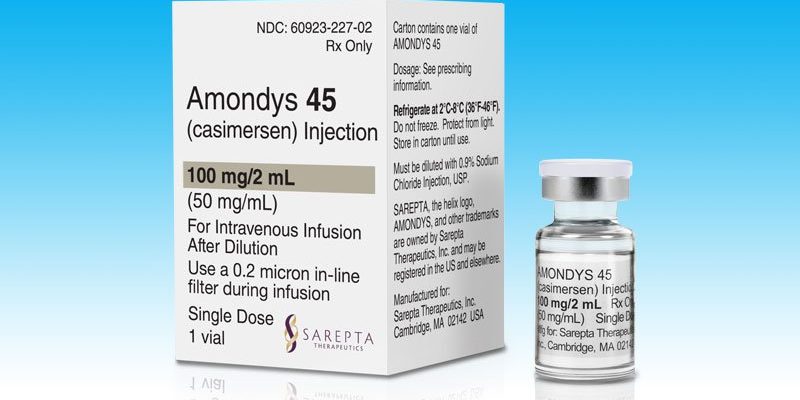 The US Food and Drug Administration (FDA) has approved the antisense oligonucleotide casimersen (Amondys 45, Sarepta Therapeutics) injection for the treatment of patients with Duchenne muscular dystrophy (DMD) plus a rare DMD mutation, the agency has announced.

This particular mutation of the DMD gene “is amenable to exon 45 skipping,” the FDA noted in a press release. It added that this is its first approval of a targeted treatment for patients with the mutation.

“Developing drugs designed for patients with specific mutations is a critical part of personalized medicine,” Eric Bastings, MD, deputy director of the Office of Neuroscience at the FDA’s Center for Drug Evaluation and Research, said in a statement.

Today’s approval was based on results from a 43-person randomized controlled trial. Patients who received casimersen had a greater increase in production of the muscle-fiber protein dystrophin than their counterparts who received placebo.

The FDA notes that DMD prevalence worldwide is about 1 in 3600 boys — although it can also affect girls in rare cases. Symptoms of the disorder are commonly first observed around age 3 years but worsen steadily over time. DMD gene mutations lead to a decrease in dystrophin.

As reported by Medscape Medical News in August, the FDA approved viltolarsen (Viltepso, NS Pharma) for the treatment of DMD in patients with a confirmed mutation amenable to exon 53 skipping, following approval of golodirsen injection (Vyondys 53, Sarepta Therapeutics) for the same indication in December 2019.

The DMD gene mutation that is amenable to exon 45 skipping is present in about 8% of patients with DMD.

The trial that carried weight with the FDA included 43 male participants with DMD aged 7-20 years and. All were confirmed to have the exon 45-skipping gene mutation and all were randomly assigned 2:1 to received IV casimersen 30 mg/kg or matching placebo.

Results showed that, between baseline and 48 weeks posttreatment, the casimersen group showed a significantly higher increase in levels of dystrophin protein than the placebo group.

Upper respiratory tract infections, fever, joint and throat pain, headache, and cough were the most common adverse events experienced by the active-treatment group.

Although the clinical studies assessing casimersen did not show any reports of kidney toxicity, the adverse event was observed in some nonclinical studies. Therefore, clinicians should monitor kidney function in any patient receiving this treatment, the FDA recommended.

Overall, “the FDA has concluded that the data submitted by the applicant demonstrated an increase in dystrophin production that is reasonably likely to predict clinical benefit” in this patient population, the agency said in its press release.

However, it noted that definitive clinical benefits such as improved motor function were not “established.”

“In making this decision, the FDA considered the potential risks associated with the drug, the life-threatening and debilitating nature of the disease, and the lack of [other] available therapy,” the agency said.

It added that the manufacturer is currently conducting a multicenter study focused on the safety and efficacy of the drug in ambulatory patients with DMD.

Previous: Vitamin D deficiency: How much to take and how to know you’ve taken too much
Next: Fans Are Losing It Over Naomi Osaka’s Anime-Inspired Pink Hair
Related posts
Pet Care News