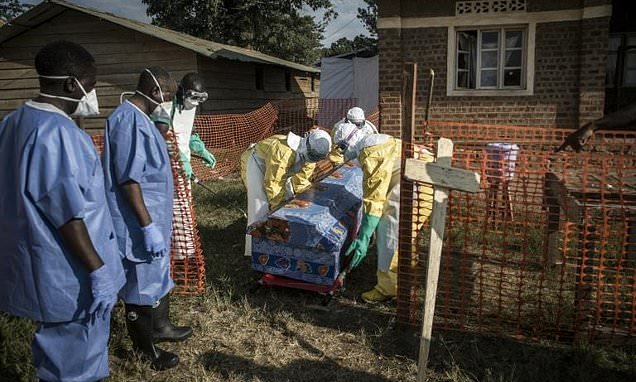 Fifty-nine people are feared to have died in the Ebola outbreak in the Democratic Republic of Congo (DRC).

Some 32 of the deaths have been confirmed as being due to the virus, which is considered one of the most lethal pathogens in existence, while the remaining 27 fatalities are ‘probably’ a result of Ebola.

As many as 102 are thought to be living with Ebola, which causes agonising diarrhoea and unexplained bleeding, in the DRC.

This comes after the DRC’s health ministers approved four experimental treatments against the life-threatening virus yesterday in a desperate attempt to contain the outbreak in the violence-torn east, which borders Uganda.

Virologists have warned the situation is ‘hard to control’ due to cases being in a conflict zone roamed by armed militias. 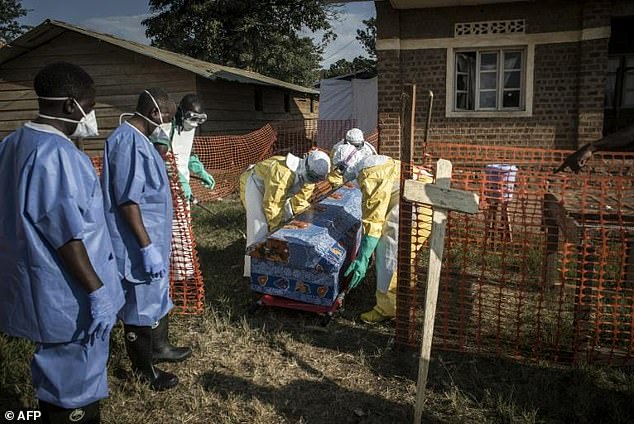 Aid workers are battling round-the-clock to contain the outbreak, which has struck the east of the country on the border with Uganda

Since the last bulletin on August 14, 45 new confirmed Ebola cases and 18 deaths have been reported. Nine suspected incidences are being investigated.

Some 39 patients are being treated in specialist Ebola centres, 36 of which are in Mabalako and the remaining three in Beni, which is the epicentre of the outbreak in the North Kivu province.

Thirteen cases have been reported among health workers, of which one medic has died.

Since the outbreak was declared on August 1, 10 patients have recovered from the disease and are back living at home.

People in their 30s are the most affected, with 28 per cent of patients being 30-to-39, with women making up more than half of sufferers.

Last week, health authorities in the DRC started administering a treatment known as mAb114 to Ebola patients for the first time.

Ten patients have received the experimental drug so far and have experienced a ‘positive evolution’, according to the health ministry.

DRC’s ethics committee has also approved Remdesivir, which is manufactured by the US-based Gilead Sciences. One patient has received the drug and is said to be doing well.

The other experimental drugs approved for use are: ZMapp, an IV treatment made by San Diego’s Mapp Pharmaceutical; the Japanese drug Favipiravir; and Regeneron Pharmaceuticals’ Regn3450 – 3471 – 3479.

Beni’s mayor Jean Edmond Nyonyi Masumbuko Bwanakawa announced treatment for Ebola will be free in the region for three months as of Monday.

He hopes the move will ‘remove the financial barrier that could dissuade the population from going to the health centre’. 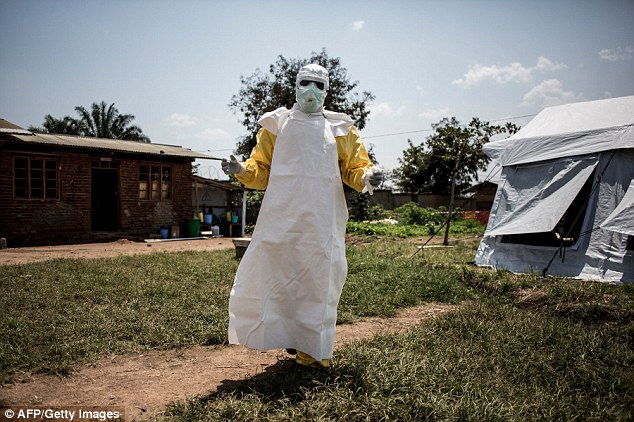 Emergency: A health worker gets ready to perform medical checks inside an Ebola Treatment Centre run by The Alliance for International Medical Action (ALIMA) in Beni 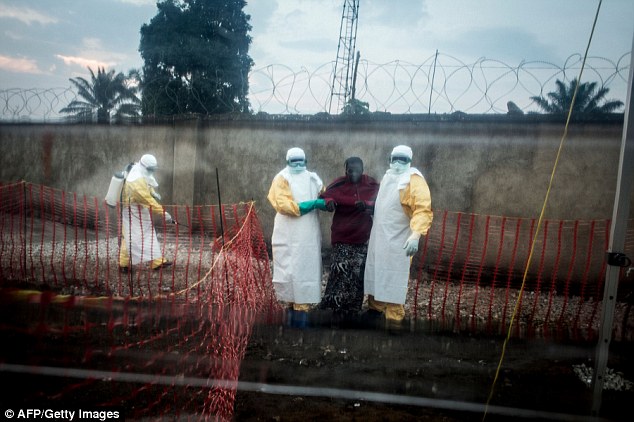 An Ebola patient is lead by two medical workers into CUBE, which has being constructed by The Alliance for International Medical Action in response to the Ebola outbreak

HAS THE DRC HAD AN EBOLA OUTBREAK BEFORE?

DRC escaped the brutal Ebola pandemic that began in 2014, which was finally declared over in January 2016 – but it was struck by a smaller outbreak last year.

Four DRC residents died from the virus in 2017. The outbreak lasted just 42 days and international aid teams were praised for their prompt responses.

The new outbreak is the DRC’s tenth since the discovery of Ebola in the country in 1976, named after the river. The outbreak earlier this summer was its ninth.

Health experts credit an awareness of the disease among the population and local medical staff’s experience treating for past successes containing its spread.

DRC’s vast, remote geography also gives it an advantage, as outbreaks are often localised and relatively easy to isolate.

Fears outbreak is reminiscent of 2014 epidemic

The current Ebola outbreak is the 10th to strike the DRC since 1976, when the virus was first identified and named after a river in the north of the country.

The outbreak on the border of Uganda was announced just days after another was declared over in the north-west of the DRC at the start of this month.

Virologists feared it was ‘reminiscent’ of the 2014 Ebola pandemic, which decimated West Africa and killed 11,000 people.

Yet the new outbreak has already dwarfed the one earlier this summer and has stoked more fears among the medical community.

In a desperate attempt to stem the outbreak, the World Health Organization’s (WHO) chief called for an end to the fighting in the DRC last week.

Dr Tedros Adhanom travelled to east DRC to examine the situation in person and told reporters in Switzerland he was ‘actually more worried after the visit than before’.

He added: ‘We call on the warring parties for a cessation of hostilities because the virus is dangerous to all. It doesn’t choose between this group and that group.’

Professor Paul Hunter, a virologist at the University of East Anglia, last week praised an experimental vaccine being distributed in the DRC that stops the spread of Ebola.

Yet, he also raised fears that conflict in the region might make the outbreak hard to control, as those infected could be displaced to refugee camps where the virus can thrive.

Professor Hunter said: ‘The effectiveness of any immunisation campaign depends on the ability to deliver that vaccine to the appropriate people is a timely manner.

‘Unfortunately the latest outbreak is in an area of armed conflict and this poses substantial difficulties for effective prevention.’

Aid workers have been told they will have to navigate their response among more than 100 armed groups.

A WHO spokesperson said: ‘This is an active conflict zone. The major barrier will be safely accessing the affected population.’ 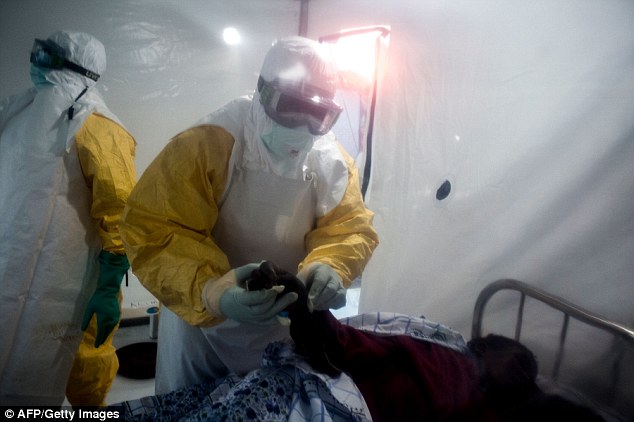 An Ebola patient is being checked by two medical workers after being admitted into a Biosecure Emergency care Unite (CUBE) in Beni, Democratic Republic of Congo

According to the WHO, the unsafe burial of a 65-year-old Ebola sufferer triggered the latest DRC outbreak.

After she was buried, members of her family began to display symptoms of the virus ‘and seven of them died’.

Genetic analysis confirmed the virus in the latest outbreak is the Zaire strain, which is the same as the one earlier this summer.

Yet, Peter Salama, WHO’s deputy director for emergency preparedness and response, revealed last week the pathogen is genetically different to the virus seen before. 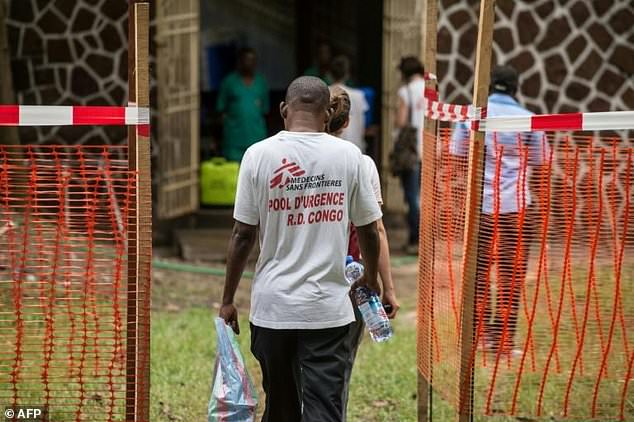 Officials in the African nation have confirmed nine deaths so far (pictured: Doctors Without Borders team members walk through an Ebola security zone at the entrance of a hospital in DR Congo, where a fresh outbreak of the virus was declared in the east of the country)

Vaccinations began two weeks ago following the success of the jabs in Equateur province, which declared its Ebola outbreak over two weeks ago.

Some 33 people were feared to have died in that outbreak, which started in the poorly-connected regions of Ikoko-Impenge and Bikoro.

The outbreak then travelled 80 miles (130km) north to Mbandaka, a port city on the river Congo – an essential waterway with around 1.2 million inhabitants.

There was a concern it would spread to Kinshasa – 364 miles (586km) south, which has an international airport and 12 million residents.

All neighbouring countries were alerted about the outbreak of Ebola before it was declared over amid fears it could spread easily.

Officials hailed the use of an experimental vaccine, known as rVSV-ZEBOV, in stemming the Ebola outbreak in north-west DRC in July.

More than 3,000 doses remain in stock in Kinshasa, allowing authorities to quickly deploy it to the affected areas near the Ugandan border.

Barthe Ndjoloko, who oversees the health ministry’s Ebola response, claims officials are working to identify those who may be infected.

He revealed last week the vaccination campaign will focus on healthcare workers and those who have come into contact with confirmed cases.

The 2014 international response to the Ebola epidemic drew criticism for moving too slowly, prompting an apology from the WHO.

That pandemic was officially declared over back in January 2016, when Liberia was announced to be Ebola-free by the WHO.

A team of international researchers were able to trace the pandemic back to a two-year-old boy in Meliandou – about 400 miles (650km) from the capital, Conakry.