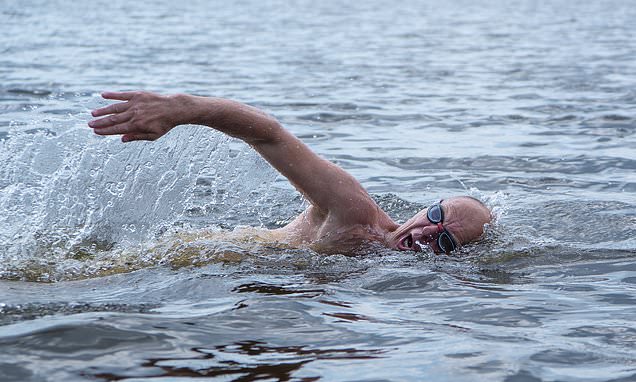 Parkinson’s patients with electric brain implants could forget how to SWIM, scientists warn after 69-year-old nearly drowns because of his device

A treatment used by hundreds of Parkinson’s patients every year may rob people of their ability to swim, a study suggests.

This was despite the fact many of them were competitive swimmers earlier in life and continued to swim after their diagnosis.

The researchers said the side effect was peculiar, because most patients see their mobility and hand-eye co-ordination vastly improve following surgery.

They believe DBS may interfere with a part of the brain that stores synchronized movements learned in the past. 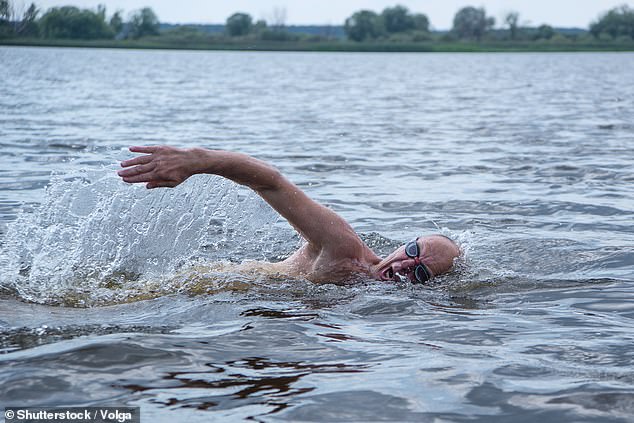 A treatment used by hundreds of Parkinson’s patients every year may rob people of their ability to swim, scientists say (file)

And while the academics note the side effect is rare, they have urged patients to be cautious in deep water after one study participant almost drowned.

They are hooked up to a pulse generator device fitted in patients’ chest that works like a pacemaker.

It regulates faulty brain activity by zapping electrical signals into the thalamus, a small area at the base of the organ which causes shakes, rigidity and slow movement.

In their latest study, researchers from the University of Zurich in Switzerland looked at 217 Parkinson’s patients. They were all implanted with the DBS devices.

Of them, nine participants lost their ability to swim following the treatment, despite being ‘proficient swimmers even after their PD diagnosis’.

Among the nine was a 69-year-old man who owned a lakeside house. He had to be rescued by a family member after jumping into the lake and almost drowning.

Another case involved a 59-year-old woman who had participated in numerous swimming competitions. After getting her DBS device, she completely lost her ability to swim.

Parkinson’s disease affects one in 500 people, and around 127,000 people in the UK live with the condition.

It causes muscle stiffness, slowness of movement, tremors, sleep disturbance, chronic fatigue, an impaired quality of life and can lead to severe disability.

It is a progressive neurological condition that destroys cells in the part of the brain that controls movement.

Sufferers are known to have diminished supplies of dopamine because nerve cells that make it have died.

There is currently no cure and no way of stopping the progression of the disease, but hundreds of scientific trials are underway to try and change that.

The disease claimed the life of boxing legend Muhammad Ali in 2016.

Through the help of a physiotherapist, she was able to start swimming again, but ‘never came close to her previous level,’ the researchers report.

A 61-year-old former competitive swimmer and lifeguard couldn’t swim very far after the treatment and reported her swimming became ‘awkward.’

Another three patients tried switching off their DBS units and found their ability to swim came back immediately.

But because their Parkinson’s symptoms also quickly came back, they decided to turn the devices back on.

Co-author of the study, DR Daniel Waldvogel, a neurology professor at the Swiss University, said: ‘Until more research is done to determine why some people with deep brain stimulation can no longer swim, it is crucial that people be told now of the potential risk of drowning and the need for a carefully supervised assessment of their swimming skills before going into deep water.’

Dr Brain Kopell, director of the Center for Neuromodulation at the Mount Sinai Health System in New York City, said he had never heard of anyone losing their ability to swim after DBS.

Considering that there have been more than 180,000 DBS implantations over 20 years, the new findings are ‘unusual,’ he said.

He added: ‘These researchers had nearly 5 per cent who cannot swim anymore. I’ve had patients participate in triathlons and play instruments after DBS.

‘I would argue that in 20 years, if it’s really 5% of the time I think it would have been reported before.

‘This is potentially a disservice to Parkinson’s patients. It’s a really interesting finding that needs more understanding before anyone can make a clinical recommendation.’

The findings were published in the medical journal the American Academy of Neurology.

Parkinson’s tremors could be treated with SOUNDWAVES, claim scientists

Zapping the brains of Parkinson’s patients with ultrasound waves could relieve their shakes and stop them needing surgery, a study suggests.

Researchers from the University of L’Aquila in Italyfound 95 per cent of patients in a trial saw an immediate reduction of their tremors after being treated with high-frequency soundwaves.

And less than one in 10 (eight per cent) experienced side effects over the next six months.

The therapy worked by concentrating vibrations on tiny specific areas of the brain to heat up and destroy rogue nerves which cause Parkinson’s symptoms.

The shaking in Parkinson’s is caused by faulty circuits in the thalamus, a small area at the base of the brain.

Medics target this with high-frequency soundwaves. These ultrasound beams generate heat that breaks the abnormal circuit causing the tremor.

The therapy was approved by the UK watchdog NICE last June and is currently being trialled at the Imperial College Healthcare NHS Trust.

Previous: How to sleep: Consuming this drink before bed could help with a good night’s rest
Next: Nutritional traffic light: Nestlé introduces Nutri-Score in Germany
Related posts
Pet Care News