The coronavirus jab’s most tantalising side effects? It may help fight cancer, chronic pain… and even Alzheimer’s

Joan Wakefield has barely been able to walk for the best part of six months. The 72-year-old from Stockport had a knee replacement in October and has since suffered infections in the scar tissue, causing agonising pain.

Then at the beginning of this month she received the first dose of AstraZeneca’s Covid-19 vaccine. ‘I woke up the next morning and the leg pain and stiffness was gone,’ she says.

‘I couldn’t believe it. I joked with my partner about whether the vaccine had anything to do with it. Previously, I couldn’t even bend my leg. Now I can extend it fully, and even put my shoes and socks on. I’m optimistic I’ll be able to return to work sooner, rather than later, now.’

It seems ludicrous – a vaccine designed to protect against one virus can, somehow, improve other totally unrelated elements of health.

But Joan Wakefield is far from alone. 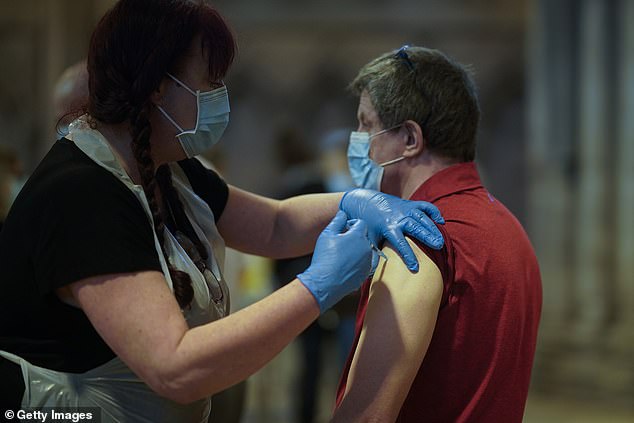 A man receives his Covid-19 vaccinations at Lichfield Cathedral, Staffordshire earlier this week

Last month, Mail on Sunday GP Ellie Cannon wrote about the curious case of a man with Lyme disease who’d found his long-term fatigue had evaporated just days after having the Covid vaccine. Scores of you wrote in to tell similarly miraculous tales.

One has seen stubborn patches of eczema on her arms, legs and midriff mysteriously disappear within hours of having the jab. Another claimed that dizzying vertigo she’s battled for 25 years vanished four days after her shot.

What to read, watch and do

The Science Of Living: 219 Reasons To Rethink Your Daily Routine, by Dr Stuart Farrimond

Does exercising daily serve as many long-term benefits as we think? A scientist reveals the truth about the daily health hacks many of us live by. 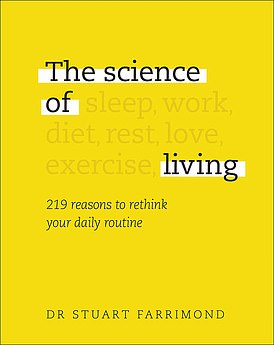 The Science Of Living: 219 Reasons To Rethink Your Daily Routine, by Dr Stuart Farrimond

A fly-on-the-wall look inside Covid wards, courtesy of Dr Saleyha Ahsan, who filmed her daily routine during the second wave. A moving and disturbing insight into the toll on NHS workers, revealing how close so many came to breaking point. 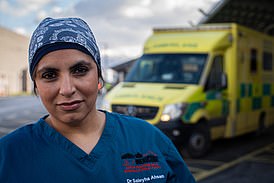 Have a pottery party

Studies show that doing arts and crafts can reduce levels of anxiety – and sculpting pottery has been proven to be particularly calming.

sculpd.co.uk, £39 for a kit for two people. Larger kits are available.

Meanwhile, a woman wrote that her husband had enjoyed a full night’s sleep for the first time since his diagnosis of a sleep disorder 15 years ago. Even more bizarrely, some claimed to have been left in better health having contracted the virus itself.

One 95-year-old care home resident was described by her daughter and being suddenly ‘alert and alive’ after having Covid last month.

‘Previously, mum was very frail, losing weight and her voice losing power. We were prepared for the end not to be far away,’ wrote Roz Ellis, from Ilford, Essex.

‘Four weeks after recovering from Covid, her voice is stronger. She stands at the window for ten minutes and she’s put on 3 lb.’

Most readers guess the jab – or infection itself – caused the immune system to leap into action and attack other, niggling health problems. And they might well be right. Scientists have documented unexpected benefits of vaccines for decades – known medically as ‘non-specific effects’.

Studies in the 1970s and 1980s by Danish scientist Peter Aaby found mass measles vaccination in West African communities reduced the risk of child death by a third – but only four per cent of this decline was explained by more people surviving measles.

Also in the 1970s, Russian scientists discovered vaccinating the population against polio reduced death from flu and other infections by up to 80 per cent.

More recently, Dutch and Greek researchers have reported astounding early results from trials looking at whether giving elderly people a vaccine for the bacterial infection tuberculosis – the BGC jab – could guard against other common infections that often land the frail and vulnerable in hospital.

Nearly twice as many infections were seen in the placebo group, compared to the vaccinated participants.

And the BCG vaccine is already used to treat bladder cancer patients with non-invasive tumours – it is administered directly into the bladder to help the immune system fight the cancer.

What’s more, bladder cancer patients who receive this therapy are less likely to develop Alzheimer’s, according to a recent Israeli study. But why?

Scientists are unsure as to the exact mechanism. Some indeed suggest vaccines can ‘train’ the immune system, strengthening it.

But Professor Sheena Cruickshank, immunologist from the University of Manchester, doesn’t buy into this theory and insists there’s a different explanation.

She says: ‘The protection we see against other health problems in those who’ve had measles and BCG vaccines is a benefit of not having suffered those illnesses in younger years.

‘Suffering measles, tuberculosis or any other infections we vaccinate against can have long-term detrimental effects on our immune system.’

Studies show they weaken the response to threats and provoke systemic inflammation. Over time, this increases the risk of a host of diseases. 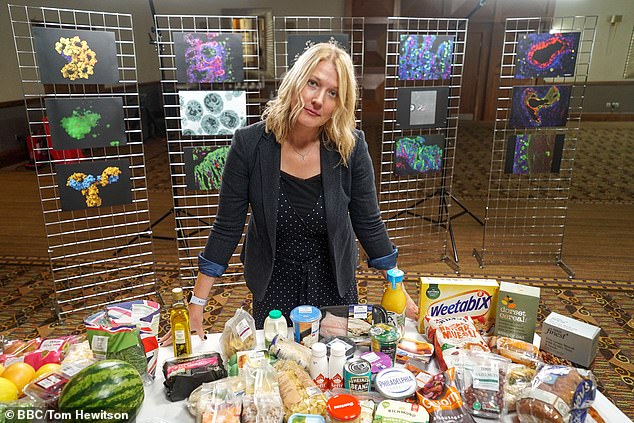 For those experiencing miraculous recoveries after the Covid-19 jab, Professor Sheena Cruickshank, immunologist from the University of Manchester, pictured, says the explanation lies with our emotional response to it

‘People vaccinated against these infections will in turn be less likely to suffer other diseases as a result.’

As for those experiencing miraculous recoveries after the Covid-19 jab, Prof Cruickshank says the explanation lies with our emotional response to it. ‘The pandemic has been hugely stressful, and we often underestimate the effect of stress on our immune system,’ she says.

Vaccines prevent more than 2.5million deaths around the world every year, according to the World Health Organisation.

She explains that increased stress hormones interfere with the ability of immune cells to target infections. She says: ‘This is why we tend to get bad colds or pick up bacterial infections when we’re stressed and run down.

‘It’s also this response that, in vulnerable people, leads to a flare-up in inflammatory conditions like eczema – because the immune system is going haywire.’

Dr Cruickshank suspects that the vaccine will come as a relief to many, immediately reducing stress levels. The beneficial effect on the immune system can be instant. It’s astonishing,’ she adds.

She also highlights that the type of vaccine used to prevent Covid-19 is markedly different to those used in previous studies.

‘The measles and tuberculosis jabs are all what’s called ‘live’ vaccines.

‘They involve injecting a minuscule amount of a weakened version of the virus or bacteria that causes the disease.

‘This helps the immune system recognise it when it sees it in larger doses, so it’s quicker to respond.

‘But all the Covid-19 vaccines work, not by injecting viral particles, but the genetic instructions that our immune cells need to create a small part of it.

‘It’s unlikely it’ll have any effect on immune cells they’re not specifically designed to target.’

Joan Wakefield has no doubt about the cure for her creaky knee. She writes: ‘As soon as I read about other people seeing miraculous effects from the vaccine, it all made sense.

‘I fully believe this is the case with me.’