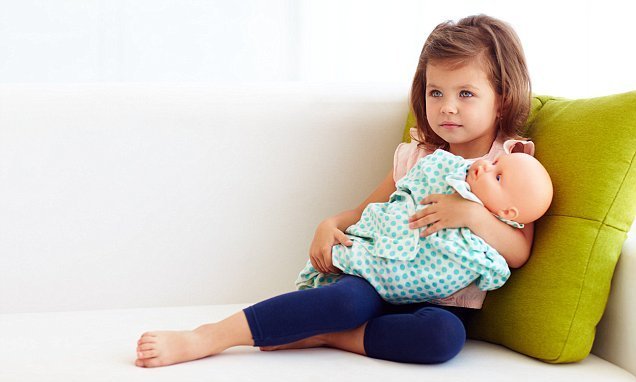 Does your child cradle their dolls on the left? That’s a sign of a strong mind, study suggests

Children who carry their dolls in their left arms have better cognitive abilities and social skills, new research suggests.

We use the right side of our brains to process information about faces, which makes the left side of our field of vision optimal for perceiving faces.

Scientists had previously discovered that most humans favor the left side for holding babies.

New research conducted in the UK suggests that children that tend to hold their dolls on this side are also sharper and socialize better. Humans are social creatures. So social, in fact, we position ourselves in certain ways just to optimize the way we view others’ faces.

The neural ‘wiring’ that connects our eyes and brains is crossed, so to speak, so that visual information that we take in on the left is fed into and processed by the right hemisphere of the brain.

Adults process words in the brain’s left hemisphere and faces in the right one, so if we can we tend to keep people to the left to expedite the way we take in info about their images

Some research has suggested that young children’s brains do not separate facial processing, in fact. They still use the left side of the brain to understand words, but do not take in facial information with any preferential side.

But the new study, from the University of London, suggests otherwise.

In experiments with nearly 100 four- or five-year-old children, the scientists found that the children recognized even a rudimentary drawing – consisting of three dots – as a face.

When the children were given a blank pillow, they did not cradle it, like you would a baby. But when three dots were drawn on the pillow, they saw it as a face and cradled the ‘baby.’

‘The phenomenon, known as the “left cradling bias,” is not just present in humans – it is pervasive across the animal kingdom and found in species as different as gorillas and flying foxes,’ explained Dr Gilliam Forrester, one of the study authors.

‘Keeping a baby in the carer’s left visual field allows for more efficiently monitoring of the baby’s wellbeing.’

Regardless of which hand was dominant, some children would cradle the pillow doll in their left arms while others held it to the right.

The kids that cradled it on the left, giving them the optimal position for facial processing, performed better than the right-holding children on a series of mental and social tasks the researchers gave them.

The same patterns emerged when the scientists gave the children an actual baby doll, too.

Their so-called ‘left cradling bias’ was ‘present early in development and you do not need to have had experience of holding babies to express this preference,’ said Dr Forrester.

Mothers do the same thing, with 80 percent of them holding their babies to the left, especially during the first 12 weeks of their child’s life when they are most vulnerable and need to be closely watched.

Children who held their dolls on the left also tended to follow instructions better and have a higher desire to do as they were told, suggesting that their social skills were better.

‘What was interesting was that children who held the baby doll with a preference for the left arm scored higher on social ability tests, compared with children who held with a right-side preference, indicating that using the visual field linked to the dominant hemisphere for processing social stimuli gives the individual a real-life advantage,’ Dr Forrester said.

Previous: Beach Workouts Can Be Torture—But This One Is Worth It
Next: Proteins found in semen increase the spread of Ebola virus infection: Penn study suggests that targeting amyloid fibrils could prevent sexual transmission
Related posts
Pet Care News