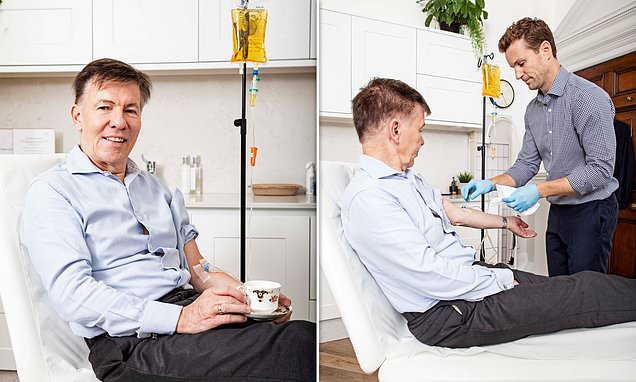 Could a £650 enzyme drip finally banish post-Covid fatigue? ANDREW PIERCE tries NAD+ treatment in the hope of curing his tiredness

Researching reasons for persistent tiredness on the internet, I stumbled upon this on the NHS website: ‘Feeling exhausted is so common that it has its own acronym: TATT — ‘tired all the time’.’

The causes were put down to too many late nights, stress, or having a newborn or noisy baby.

But what if TATT is coupled with a rasping sore throat and stubborn dry cough? The website suggested I should see a doctor if the symptoms persisted.

I had been worn down by the sore throat and fatigue for at least a month, so I made a rare appointment to visit my GP, Dr Dan Wright.

After a battery of blood tests, his diagnosis was clear and unambiguous: ‘You’re suffering the after-effects of Covid.’

It had been my second bout of Covid, and although it had been nothing like as bad as the first time — in the early days of the pandemic, before the arrival of the vaccines — the tiredness was debilitating. 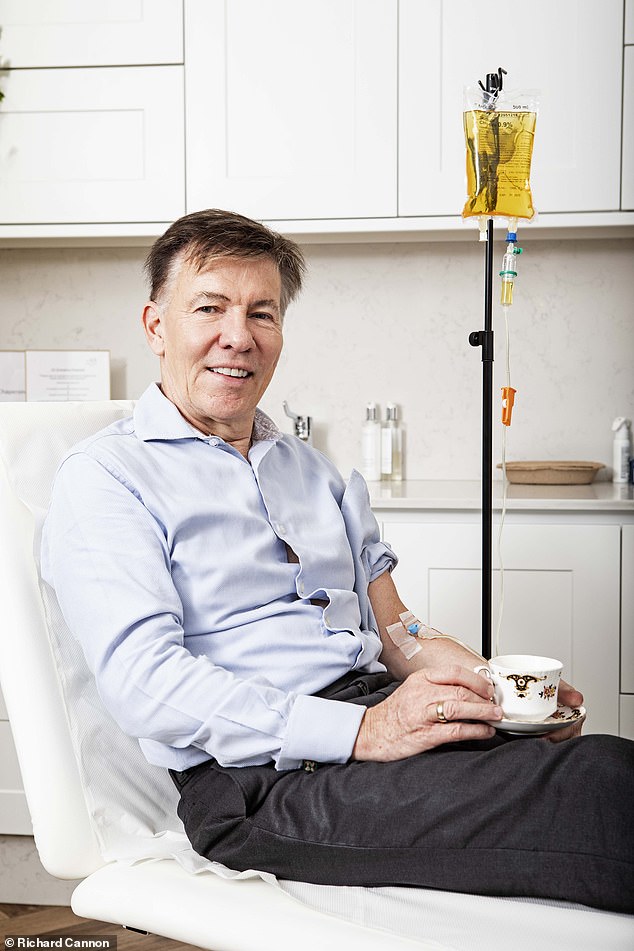 Rather than a pill, at my private GP surgery, NAD+ is now pumped into the veins via a drip — a process that takes between 45 minutes and an hour

Dr Wright recommended earlier to bed and later to rise, but that was not going to work for me. I have a regular slot on breakfast television four days a week, which means being out of the house by 5.30am, and 4.15am if I’m doing GB News.

So he suggested an alternative. And a radical one at that.

He punched a few keys on his computer and up flashed the catchy phrase: nicotinamide adenine dinucleotide.

Not only had I never heard of it, I couldn’t even pronounce it.

Dr Wright said it was better known as NAD+ and apparently popular with people who work long hours or have stressful lifestyles — and party animals — for an energy boost.

It was pioneered in the U.S. and has reportedly even featured in the reality show Keeping Up With The Kardashians, which I’ve never watched.

In fact, it’s been around in the form of a pill for several years and is a derivative of vitamin B3.

But rather than a pill, at my private GP surgery, NAD+ is now pumped into the veins via a drip — a process that takes between 45 minutes and an hour.

An initial sceptic, Dr Wright was persuaded about its potential after manning a NAD+ tent at the four-day Wilderness Festival in Oxfordshire over the summer.

One of his patients, who is closely involved with the festival, had undergone the treatment and swore by its effects, so asked Dr Wright to set up shop in the wellness section of the event. 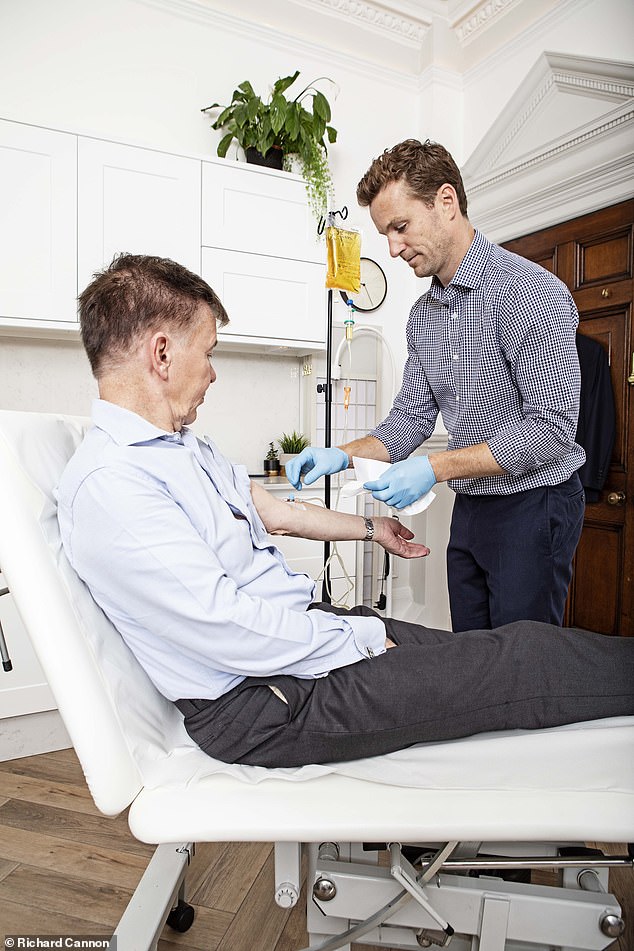 So I signed up, appropriately yawning as I took my seat in the surgery. Dr Wright attached the drip and inserted the needle. Within minutes, I felt my chest tightening and I was dizzy and puffed, as though I had been running for a long time. But after about ten minutes, the side-effects seemed to have melted away and I was engrossed in my newspaper

Wilderness is often called Britain’s poshest festival, not least because the Old Etonian former prime minister David Cameron, who lives nearby, is a regular.

The tent which promoted NAD+ as a pick-me-up did a roaring trade. (Mr Cameron wasn’t a customer.)

Dr Wright says: ‘One husband asked me: ‘What have you done to my wife? She was hungover and good for nothing this morning. Now she’s unbearably energetic. Can I have some, too?’.’

If you believe the blurb for the treatment, which I didn’t, as well as being a tonic after a night of partying, it can also slow the ageing process and banish tiredness by promoting a deeper sleep.

Too good to be true?

The blurb says that NAD+ is a coenzyme (something that boosts enzymes, I’m told) in our bodies, which helps cells to convert the protein and fats in the food we eat into the energy we need.

Without it, our cells can’t function properly.

So I signed up, appropriately yawning as I took my seat in the surgery. Dr Wright attached the drip and inserted the needle. Within minutes, I felt my chest tightening and I was dizzy and puffed, as though I had been running for a long time.

But after about ten minutes, the side-effects seemed to have melted away and I was engrossed in my newspaper.

After the first session I delved deeper into the history of NAD+. Some of those who’ve undergone the process boast of a fog-free brain, a better complexion and endless reserves of energy.

Well, I can report that the night after my first treatment I had the deepest sleep I’ve had in ages.

Usually I’m up once in the night, courtesy of my ageing bladder, but this time I slept right through until the dawn chorus alarm went off.

I returned for two more infusions over the next two weeks and each time my sleep was vastly improved. What’s more, the irritating wheezing cough had vanished and my sore throat was better.

But would they have cleared up by that time anyway? Before my first infusion, my blood tests had shown some evidence of inflammation (in particular, markers called ESR and CRP), low levels of ferritin (iron) and some liver enzyme dysfunction.

‘This can be in keeping with some of the post-Covid-type symptoms you’ve been experiencing,’ Dr Wright told me.

The blood tests were repeated halfway through the three-week course, and then again two weeks after the final NAD+ session.

By then, my inflammatory markers were back to normal and I certainly felt healthier. I had more energy and I was sleeping better.

‘And you don’t look so worn out,’ Dr Wright told me.

But was this the NAD+ working its magic, or was I experiencing an expensive placebo effect?

While I was being treated in a doctor’s surgery, NAD+ is not actually medicine, which means it doesn’t have to go through exhaustive tests to prove that it’s not a placebo.

There’s no data to back up the claims in the blurb about promoting youthfulness by slowing down the ageing process.

There’s also no compelling evidence to show it is more effective when administered via an IV drip instead of being given as a pill.

Over to Dr Wright. ‘The data behind NAD+ is becoming increasingly robust,’ he says.

‘In 2020, a review of the literature was undertaken to evaluate the potential health and longevity benefits due to increasing NAD+ levels.

‘In the 147 articles, 113 pre-clinical and 34 clinical, the review [published in the journal Pharmaceuticals] found that a significant majority of the studies indicated that the NAD+ had a favourable outcome on several age-related disorders associated with the accumulation of chronic inflammation, such as that found in long Covid, obesity, chronic stress and other conditions.’

I think it would be fair to say that this wouldn’t be enough to get this treatment past the bodies that decide which treatments you can get on the NHS.

And side-effects? The same review said: ‘There were no conclusive adverse effects for long-term use of this [but] more studies are underway to verify this.’

When I pressed him about the placebo effect, Dr Wright revealed that he is, in fact, a bit of a fan of this concept.

‘Fairly regularly, I have patients who tell me that as soon as they have booked an appointment to see me, their symptoms improve significantly,’ he says.

‘This may be due to what is termed ‘classical conditioning’. Given the strong relationship doctors can develop with their patients, they may associate the surgery with receiving treatment or feeling better.

‘This association can then, in turn, influence how they feel about the treatment they’re receiving.’

There is more detailed analysis from Ted Kaptchuk, who is a professor of medicine at Harvard Medical School in the U.S., and researches the potential benefits of the placebo.

He argues that it’s ‘more than positive affirmations — believing that a treatment will be effective.

‘It’s about creating a deeper connection between the brain and the body so that they work in synchrony’.

If my brain and body are now working in synchrony, it hasn’t been cheap. It costs £650 per infusion, or five for £2,250. (It may come as no surprise that my GP’s surgery, The Wright Practice, is in Harley Street — and, full disclosure, I did not pay for the treatment.)

But if I went into it a cynic, I came out of it much more open to believing that the reason I’m sleeping better, and my long Covid symptoms have gone, is because of the drip.

Whether that’s because the NAD+ in it worked, or because I wanted to believe it would help meant that it did, who knows. Either way, I’m feeling a whole lot better.

The research involved 800 patients (from centres around the world, including the UK) with breast cancer, colorectal cancer, Hodgkin lymphoma or non-Hodgkin lymphoma.

Half of the patients were given daily symptom questionnaires on a phone-based Advanced Symptom Management System, which then sent alerts to hospital clinicians for action if needed. They were also given advice on how to manage their symptoms. The other half underwent standard hospital care.

After six cycles of chemotherapy, the patients having remote monitoring were less anxious and reported fewer new physical symptoms than the group receiving standard care, according to the study in the BMJ.

It is thought that remote monitoring helps as it provides targeted help for specific symptoms and makes patients feel more safe and secure even while at home.

Previous: The impact of multimorbidity, smoking status, and demographics on vaccine hesitancy among pregnant women in Wales
Next: 6 tips for enjoying good gut health over Christmas and the new year
Pet Care News 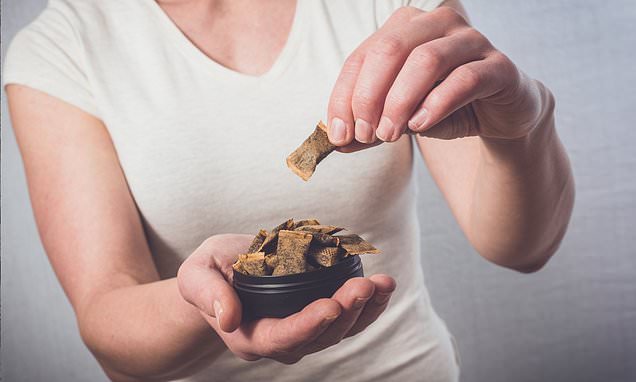