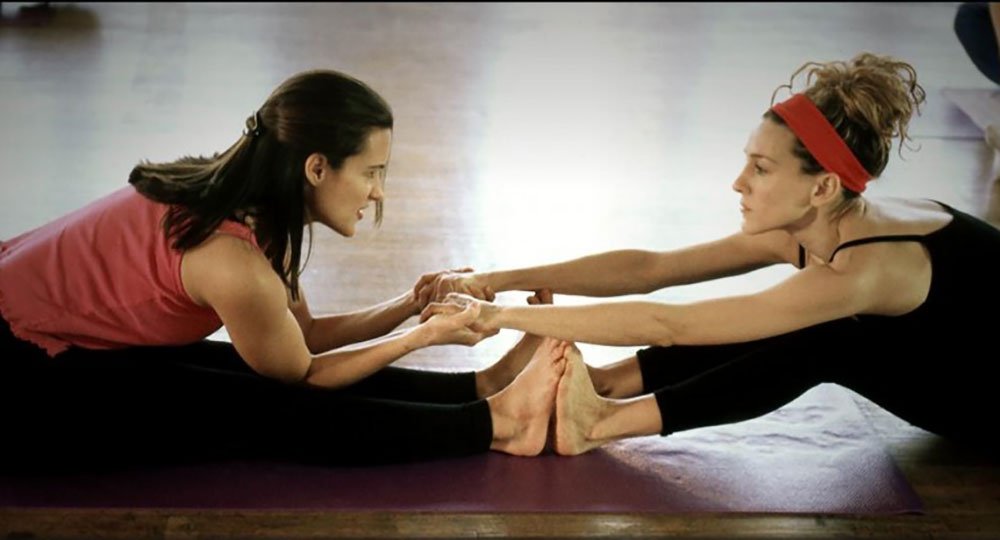 Ever get a sneaky feeling that your downward facing dog just makes you look like you’ve fallen and can’t get up? Or that everybody knows the secret to savasana except for you? Well, just because your flow feels funky, doesn’t mean you should stash your mat in a closet for good.

“I think it’s important for us to remember, in general, that not moving is more dangerous than moving, even if we’re not moving perfectly,” says yoga teacher Bernadette Birney. Here are a few things that yogis everywhere tend to get wrong—and how to set yourself up for success from sukhasana to savasana.

SUKHASANA
When you’re asked to take a comfortable seat at the beginning of class, it’s actually a little more complicated than just plopping yourself down on your mat. Also called “easy pose,” sukhasana, which means sitting cross-legged, is anything but simple. For many, tightness in the low back and hamstrings can cause the pelvis to tuck under and the back to round when sitting, says yoga instructor Donna Jackson. To make meditation way more comfortable, Jackson suggests perching on a block, bolster, or blanket. This will allow your sitting bones to move back a couple of inches and create a more optimal curve in your spine.

MORE: The struggles of having a vagina

BREATH AWARENESS
Whether you’re new to yoga or you’ve been practicing for years, focusing on your breath for an entire class can feel daunting. If you aren’t able to clear your mind for an hour (and who can?), you might feel like a yoga failure. But really, just five or 10 quiet moments of breath focus during a class can be enough, says Jackson. “Try not to be too hard on yourself if you lose focus on it,” she says. “Remembering to go back to your breath when you forget is a moment of connection, and that’s a great place to start.”

DOWNWARD FACING DOG
If there’s one yoga pose that everyone has heard of, it’s downward facing dog. But if you spend a lot of time sitting or you aren’t super flexible, trying to force your heels all the way to the ground could be unhealthy for your lower back and hamstrings. “I totally, firmly believe you do not need to have straight legs and heels on the floor in down dog,” says Jackson. “If you have a super-tight low back and super-tight hamstrings, I think it’s best to bend the knees and lift your tail bone up toward the sky.”

MORE: Fruits that cause belly bloat

CHATURANGA
Chaturanga dandasana, the yoga version of a pushup, is performed dozens of times in a typical flow class. It’s also the pose you’re most likely doing wrong. “It’s such a hard pose physically, but even if you’re really strong there’s a lot that could potentially go wrong,” says yoga teacher Jessica Carlin.

If you’re not careful, or you’ve never been instructed otherwise, it’s common to roll your shoulders forward, which could leave you at risk for rotator cuff injuries, tendonitis, and other overuse problems over time, says Carlin. Other alignment issues include lowering straight down and too far toward the floor, dropping your head first, or squeezing your tailbone under too much.

To perfect your form, first focus on your alignment standing in tadasana, or mountain pose. Stack your head over your shoulders, shoulders over pelvis, pelvis over knees, and knees over feet, says Carlin. Take this neutral alignment into yourplank pose, keeping your entire body integrated as you shift forward onto your toes and lower into chaturanga, bending your elbows no more than 90 degrees.

BRIDGE POSE
Bridge pose is an important backbend to master before setting your sights on wheel pose. People often turn their feet out, have their knees go out wide, and clench their glutes, says Jackson. That narrows the back of the pelvis and can cause back pain. Instead, keep your feet and knees parallel, and work your inner thigh muscles, instead of your glutes. Squeezing a block between your inner thighs can help you fire them up, which creates space in your lower back and can provide a lot of relief.

SHOULDER STAND
Shoulderstand has been called the “mother of all yoga poses” for its supposed ability to strengthen the immune system, improve digestion, soothe the nervous system, and improve heart health, among other potential benefits. That probably means everyone should roll on over to their shoulders and stick their legs in the air right this second, right? Probably not. While shoulder stands can be very therapeutic, it’s also one of the most potentially hazardous yoga poses if done incorrectly, says Birney. That’s because students often inadvertently flatten their necks, which creates more of neckstand than a shoulderstand, putting you at risk for injury.

Birney suggests not practicing the pose at all unless you have been thoroughly instructed in good alignment by an experienced teacher. Supported bridge with a block placed under your lower back will give you the same benefits of being inverted, without putting your neck at risk, she says. “If someone is just gung-ho to do it, it’s important to make sure that the natural cervical curve is intact and that the back of the neck is not pressed flat to the floor in shoulderstand.”

SAVASANA
Have you ever been lying down at the end of class feeling like you’re the only one who isn’t totally blissed out? Instead of spending the entire five to 10 minutes wishing your teacher would just “om” already, try finding a posture that’s more comfortable for you, says Jackson. Putting a bolster or blanket under your knees, lying on your side with a bolster between your knees, or resting your legs up the wall are all totally legit options. “Savasana is the hardest pose,” she says. “To surrender is the hardest thing, and if you’re uncomfortable, there is no way you’re going to get there.”

Previous: The Unexpected Workout Kendall Jenner Does Every. Single. Day.
Next: This Blogger’s Before And After Pics Will Make You Question Everything
Related posts
Pet Care News