L’Oréal revealed what it believed was a game-changer for personalized makeup last year with Perso, a small device that creates customizable lipstick or foundation on demand. During this year’s virtual CES tech conference on Monday, the company revealed that it’s ready to make the concept a reality with its first launch at Yves Saint Laurent.

The brand will be the first to launch the lipstick version this spring under the Rouge Sur Mesure moniker. Limited pre-orders will began today, with first shipments rolling out in March through April. it doesn’t include the hair-care treatments.

The mechanized, app-controlled device is a small, highly pocketable unit loaded with color cartridges that can be blended into different shades of the YSL Velvet Cream Matte Finish.

The Year of Ox Capsules Collections

Users have multiple ways to find or produce a desired lipstick: They can pick from a “shade wheel” for a ready-to-use look, match an outfit or existing lip color in a photo capture or rely on the smart “shade stylist,” an algorithm-based feature that can assess an outfit and recommend three options to go with it.

“If you like it, you click ‘dispense,’ and then it brings up the right amount of each cartridge,” he said. “You mix at the top and it gets you that color.” The device produces a single dose, but for more, the removable top allows users to take it on the go for touch-ups.

Of course, people can also create their own. They can even become trendsetters within the app by saving and sharing them. In that way, the app becomes its own social media network. YSL influencers will help populate the community, bringing their shades and trends, and users can peruse their own tailored feeds.

The technology was five years in the making, and it represents “a culmination of many different launches we’ve had over the past nine years that I’ve been running this team,” Balooch said.

Over the years the incubator has developed a string of personalized beauty technologies, including dermatological skin-care system Custom D.O.S.E by SkinCeuticals, on-demand foundation platform Le Teint Particulier by Lancôme and My Skin Track UV by La Roche-Posay. And L’Oréal’s 2018 acquisition of ModiFace turned it into one of the beauty industry’s leading augmented reality developers.

It all comes together in Perso, and while its debut at YSL focuses on lipstick, the system can also work for foundation and skin care. In fact, plans are already in the works for a skin care-oriented Perso that can customize formulations based on the environment. It’s slated for the end of 2021.

L’Oréal is mulling over different ways to apply Perso to its brands, which could make it a genuine platform for consumer beauty tech.

As for the premiere Rouge Sur Mesure, the device will be priced at $299 and includes two cartridges. Additional three-cartridge sets will cost roughly $100 each. By the company’s estimation, each cartridge contains the same volume of makeup as one liquid lipstick.

The initial wave of direct-to-consumer orders will go out in limited supply across the U.S., with a global launch following in September via in-store and online availability.

In other company news, the beauty giant is also introducing the L’Oréal Water Saver, a sustainability collaboration with Swiss environmental tech company Gjosa.

Oriented to bring water and energy conservation to the salon setting, the Water Saver is a hair care system that can pipe a customizable blend of L’Oréal and Kerastase products — such as conditioner, shampoo and other treatments — into a water stream that’s reduced by 80 percent. 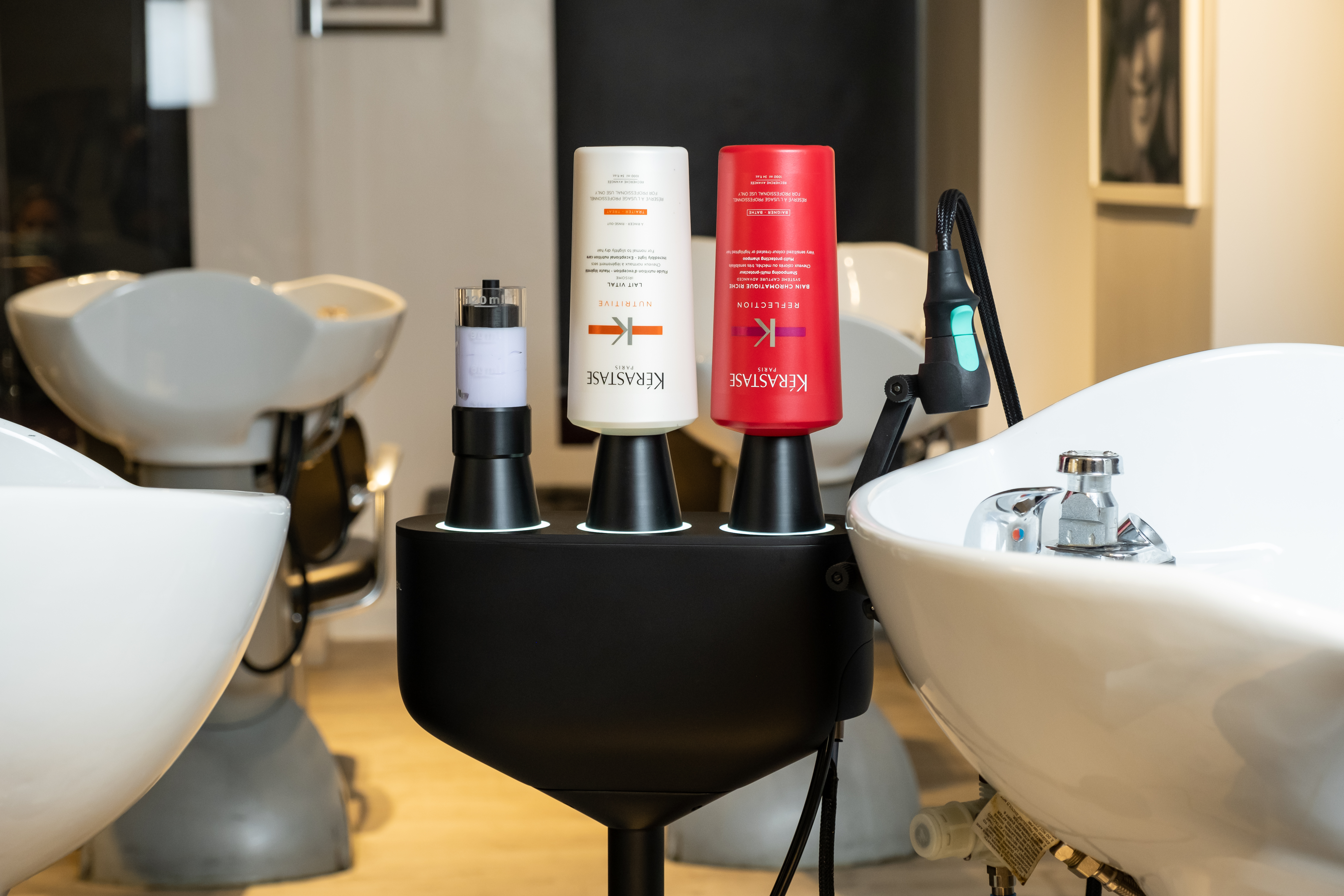 As Balooch explained it, Gjosa developed technology that shrinks the size of water droplets themselves, so there’s no discernible sacrifice in water pressure.

It’s a fully connected system that hooks into the back bar of the salon, he added, and it comes with reporting tools. It can record customized treatments for the client files, as well as reports for salon owners on how much water and energy they’re saving.

The company developed an at-home showerhead version that similarly promises to save water without undercutting the pressure. This model is likely more than a year away from launch.

According to Balooch, L’Oréal Water Saver fits into the company’s key values, which espouse inclusivity, performance and sustainability.

“It’s beauty tech for a better world,” he said.