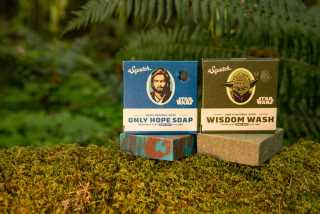 The soaps, which are available for Dr. Squatch subscribers today for $6 each and will launch to the public on July 11, are inspired by “Star Wars” characters Obi Wan Kenobi and Yoda for the light side and Darth Vader and Darth Maul for the dark side. The bars also bear resemblance to the characters, for instance the Wisdom Wash bar inspired by Yoda is green and is made with lotus leaf, while the Darth Vader and Darth Maul bars are deep exfoliators with respective black and red appearances. The four bars are available as a four-pack for $32.

“We’re excited to explore different partnerships and reach new customers with brands we know will resonate,” said Dr. Squatch chief marketing officer Josh Friedman. “’Star Wars’ is such a strong franchise. We know we can make a collection of strong products. There’s a nostalgic elements but it’s very modern. It’s an older franchise and something we wanted to tap into, but we’re also big ‘Star Wars’ fans so that helped in making the choice.”

The new collection builds on a positive 2020 for Dr. Squatch and its streak of year-over-year growth.

Friedman said the company achieved 400 percent year-over-year growth in 2020 and $100 million in revenue for the year. “We’re on track for bigger growth beyond that,” he added.

Dr. Squatch launched in 2013 offering men’s personal care products made with natural ingredients. Founder and chief executive officer Jack Haldrup developed psoriasis and couldn’t find products to help with his condition until he found natural products at a farmer’s market. He started to create his own products made with natural ingredients, which has since grown to a multimillion dollar direct-to-consumer company offering hair care, deodorant and natural toothpaste.

“We were on a growth path before 2020,” Friedman said, adding that “2019 was a huge year and I attribute it to having a product that’s really resonating and lacking in the market. The market fit allowed us to grow fast.”

“We weren’t planning to do an ad three months prior,” Friedman said. “A lot of advertisers dropped out and we saw it as an opportunity to lean in and once we got a sense we started thinking about what it will look like and what it will cost.”

But the company had seen success on YouTube on multiple occasions. Friedman said the brand has a “pretty big reach” with 300 million active views. The company had the seventh most-viewed advertisement on YouTube in 2020 and was number one on YouTube’s 2020 “TrueView for Action” advertising leaderboard with its Save Your Skin with Dr. Squatch Soap that reached 90 million views.

Now Dr. Squatch is focused on international expansion. The brand is available online in the U.S. and Canada and on Amazon, and plans to ship to international countries over the next year. It is also eyeing expansion into stores this year and into next year.

“The Super Bowl was an awesome moment for us,” Friedman said. “We’re on a very fast growth path right now, exploring new product categories to continue to grow, exploring entering retail and exploring international growth. Things we’re ticking this year and taking into next year. I think for a long time the men’s personal care industry had been dominated by brands using cheap, non-natural ingredients. We want to be the leading men’s personal care brand.”