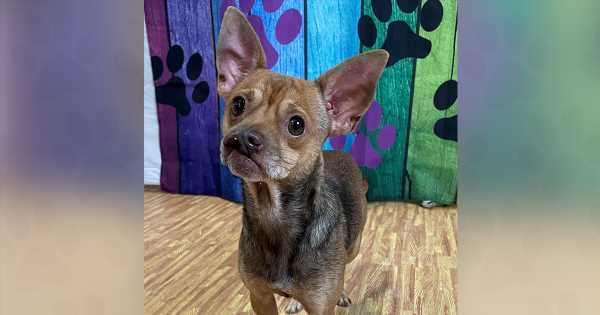 Sheila S., a volunteer at the Dubuque Regional Humane Society (DRHS) in Iowa, was not looking for another dog when she met Gimli, a heartworm-positive Chihuahua who was rescued from a hoarding case in Union County, Florida, and transported by the ASPCA to DRHS on November 15.

But when Gimli, named after a character from “Lord of the Rings,” stood up on his hind legs and hopped around, almost like he was dancing, Sheila was moved.

“He was just too cute,” says Sheila.

On the day Gimli was made available for adoption, Sheila introduced him to several potential adopters, but none were the right fit.

It wasn’t long before Sheila decided to adopt Gimli herself.

On August 18, 52 animals, including Gimli, were transported from the Florida property to the ASPCA Cruelty Recovery Center (CRC) in Columbus, Ohio, which receives and treats animals involved in cruelty, neglect and disaster cases across the country.

The animals, including newborn kittens, lived in filthy conditions, many exposed to toxic levels of ammonia, according to Teresa Ladner, Senior Director of Investigations for the ASPCA. Some of the animals also suffered from untreated medical conditions.

Dr. Laurie Millward, Senior Director of Veterinary Services at the CRC, noted Gimli’s medical issues, which included a cleft palate—an improper formation of the structures of his mouth and nose.

“This abnormality occurs in utero,” says Dr. Millward. “In addition to being a visible deformity, it can cause food to be inhaled while eating, which is called aspiration. When eating, food gets pushed through an abnormal opening of the roof of the mouth and into the nasal cavity, and then breathing can pull food into the nasal passages and lungs, causing pneumonia. Nursing puppies with cleft palates also have difficulty maintaining the needed suction to properly release milk from their mother.”

“Based on what we know about the environment Gimli grew up in, it’s amazing he survived,” Dr. Millward adds.

Gimli was also heartworm positive and suffered from cryptorchidism—the failure of a testicle to descend from the abdomen into the scrotum.

“It’s important that dogs with this condition are not bred because it’s an inherited genetic condition,” says Dr. Millward. “If cryptorchid animals aren’t neutered, the testicle that remains in the abdomen can develop into a cancerous lesion.”

While at the CRC, Gimli was neutered, and Dr. Millward began his heartworm treatment.

“We scheduled his next round of heartworm treatment so DRHS could pick up where we left off,” adds Dr. Millward, who also ensured that Gimli’s cleft palate wasn’t inhibiting his nutrition intake.

While at the CRC, one of Gimli’s most endearing qualities—his inclination to walk on his hind legs—did not go unnoticed. 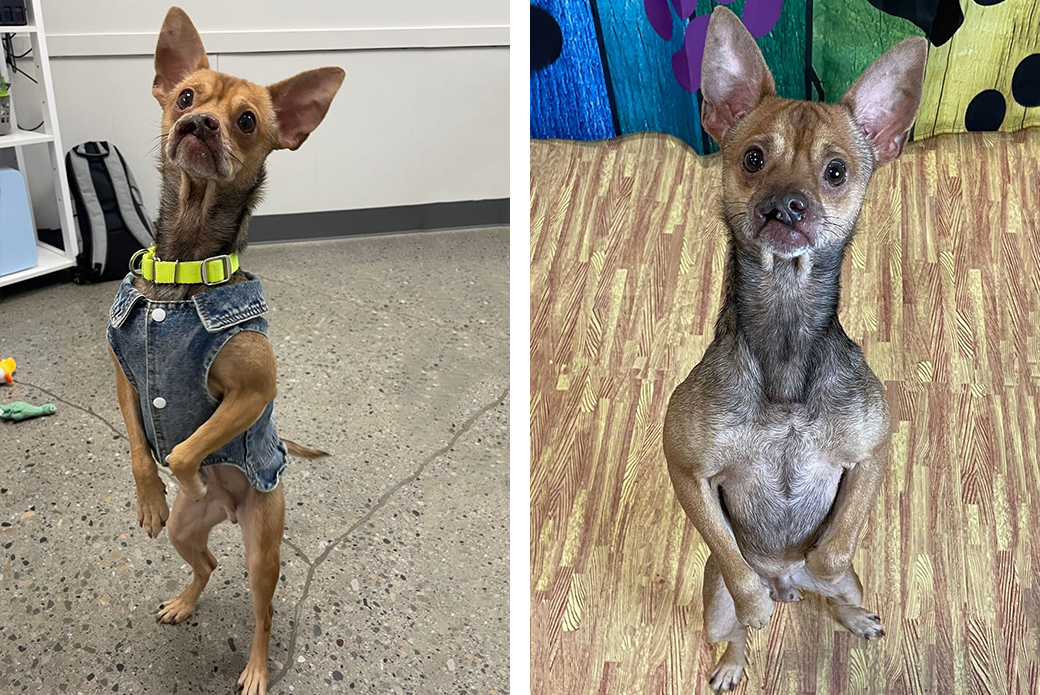 “We called it his salsa dance,” says Dr. Millward. “With his big chest muscles and low body fat, he looks very buff. He’s like this little bodybuilder.”

Dr. Crista Coppola, the CRC’s Senior Director, Animal Behavior, recalls how Gimli was at first fearful of people but loved his food.

“He quickly warmed up to us and got our attention by hopping up and down on his hind legs at the front of his kennel,” she says.  “His dancing will be remembered for years.”

Staff also referred to Gimli as “Kangaroo Jack” because he looks like a baby kangaroo.

“His little underbite smile captured everyone’s heart,” says Dr. Coppola. “He was truly a joyful little guy whom you couldn’t help but smile at when you saw him.”

In addition to Gimli’s salsa dancing, Sheila says she was drawn to his “wonky” face. 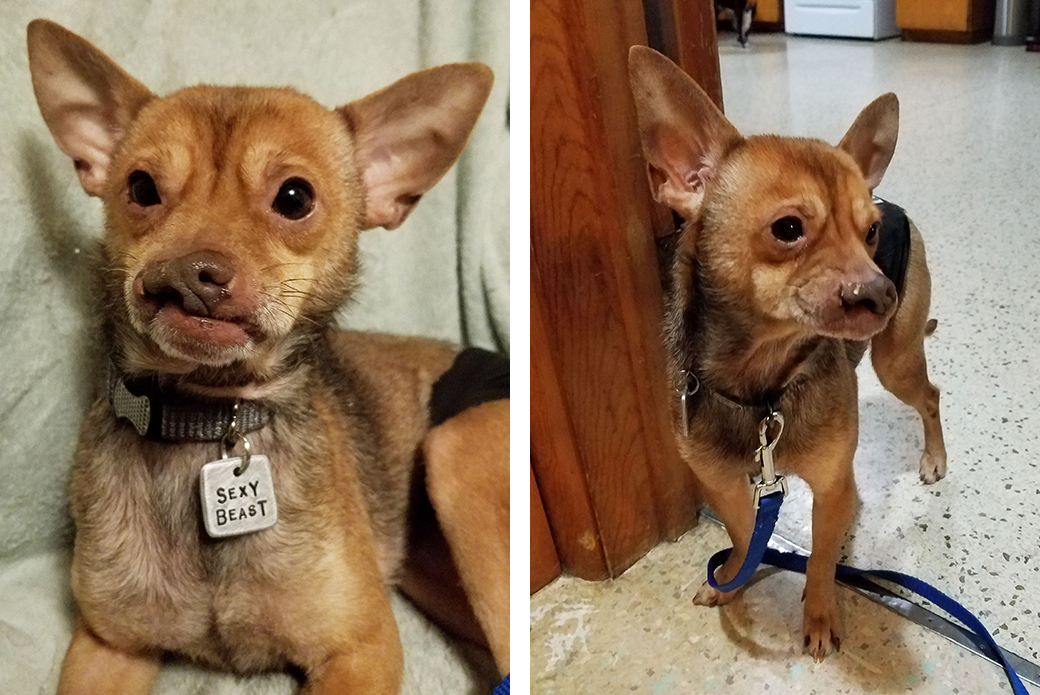 “Of the four dogs we took in, he’s the most pathetic looking of the bunch, with his nose sitting sideways,” says Sheila, who works from home as a business system analyst for a healthcare tech company.

“Pets come into my life at the most inconvenient times,” adds Sheila, who has three dogs—an elderly Lab mix named Chief, a 13-year-old pit bull named Chip, and a Corgi named Walter—and is fostering a fourth. She also has four equines, a house cat, two barn cats, and two pot-bellied pigs on 12 acres near the Iowa-Illinois border.

“I grew up with mutts,” says Sheila. “They have great personalities. And all my dogs are very friendly.” 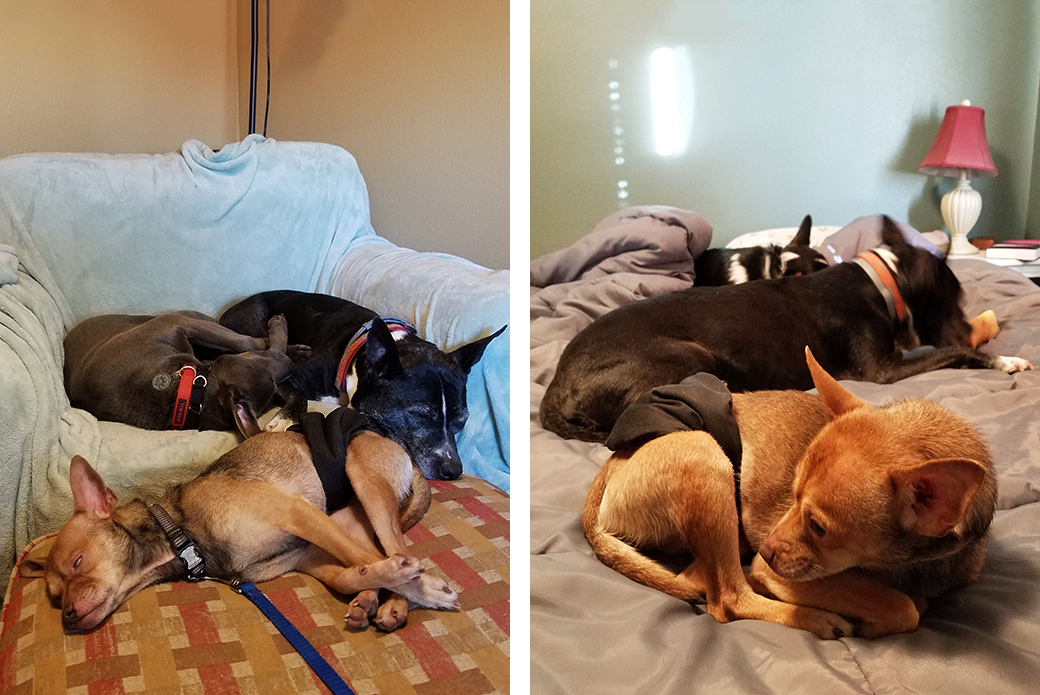 Sheila has volunteered at DRHS since 1998 and has fostered more than 65 dogs. She’s also an adoption ambassador, finding homes for her fosters so they don’t have to return to the shelter.

“There’s so much need,” Sheila says. “Volunteering makes me feel like I’m making a contribution.”

Gimli, now renamed George, likes to sit on Sheila’s lap and be carried around. She says he gets along well with her other dogs and is settling in nicely. 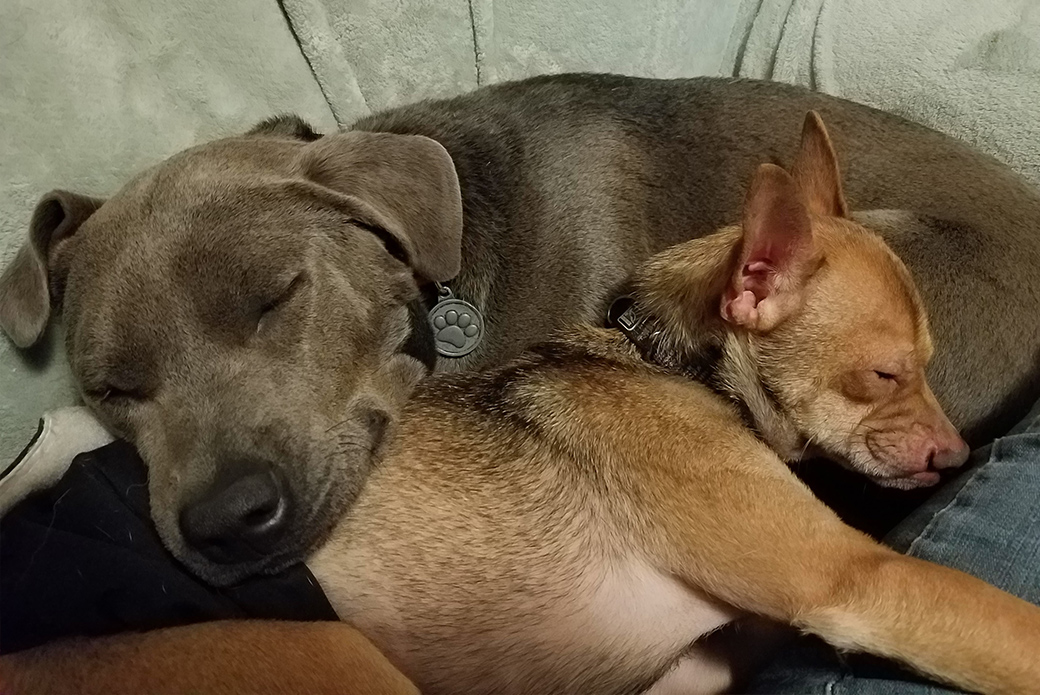 “He figured out when suppertime is,” she says, “Though it takes him a little longer to eat than my other dogs.”

But of all George’s qualities, the one Sheila treasures most is the one she noticed first: The way he danced… all the way into her heart. 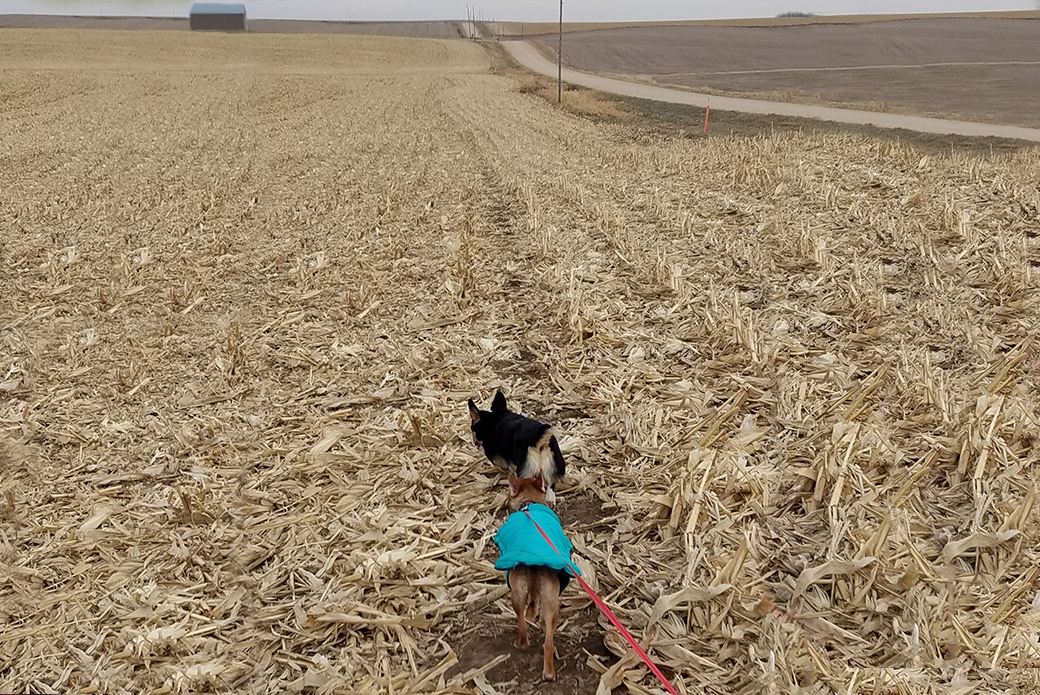