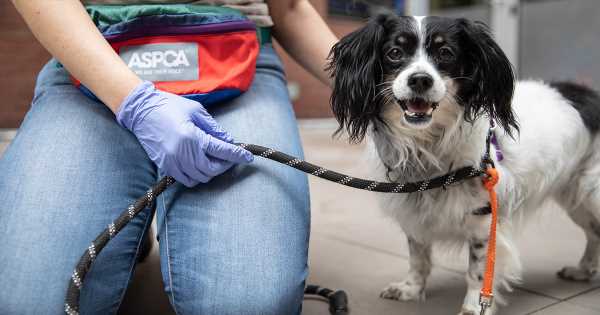 Home » Pet Care » After Being Hit by a Stray Bullet, Bronx Dog Makes a Full Recovery

Late in the evening of March 6, James W. was standing in line at grocery store in the Morris Heights neighborhood of the Bronx when gunshots suddenly rang out.

His two small eight-year-old dogs, Bailey and Pepper, were with him. He ducked down to protect the dogs, and Bailey yelped.

“All l heard was boom, boom, boom,” says James, who says he dropped to the ground to try and shield both dogs. “Bailey was on my right side and blocked the bullet. He took a bullet for me.”

When James lifted Bailey into the basket of his walker, he could see blood gushing from a hole in Bailey’s hind leg. He approached a nearby NYPD officer who radioed the precinct to send another officer who rushed James and his dogs to the Animal Medical Center (AMC), an ASPCA veterinary partner for dogs rescued by the NYPD. Pepper was unharmed.

“Bailey could not use his right back leg to walk,” says Dr. Laura Niestat, an ASPCA Forensic Veterinarian who oversaw Bailey’s intake. “Two wounds—an entry and an exit wound just below the right knee—were identified. An x-ray revealed the bones in his lower right leg were fractured into multiple pieces.”

AMC veterinarians repaired the fracture with surgical implants—a plate, screws and a pin in his femur.

“The wound was bad,” says Dr. Niestat. “The projectile penetrated through the skin and underlying soft tissues and bone. Bullets travel at a high rate of speed, and their force is tremendous and can cause extensive injury.”

Bailey following the repair of his open fracture.

Dr. Niestat explains that because Bailey’s broken bone was associated with a skin wound—also known as an open fracture—they were concerned about the development of a bone infection. And because of the severity of the fracture, the bone could fail to heal correctly.

“We were concerned Bailey’s leg would require amputation,” says Dr. Aubrey Crowley, who handled Bailey’s medical care after he was transported to the ASPCA Animal Recovery Center (ARC) on March 9.

Both Drs. Crowley and J’mai Gayle, Director of Surgery, kept a close eye on Bailey’s leg.

‘Why Did This Have to Happen?’

After leaving Bailey at AMC, James headed home and told his partner, Desiree H., what happened.

Desiree says neither she nor James knew the extent of Bailey’s injuries but were told his leg might have to be amputated.

“In my heart, I knew his leg was going to be okay,” she says. “We were grateful he was alive.”

“We made his PT as enjoyable as possible and gave him lots of praise, encouragement and treats,” says Devon. “During these sessions, his personality eventually came through. He’d be excited to see me, wagging his tail and dancing in his kennel. He also loves belly rubs.”

Volunteers read to Bailey, who watched and listened attentively. Devon made his favorite food—chicken and rice—for his picky palate.

“At first, it was a struggle to find out what motivated him,” says Erica, who discovered that Bailey loves chopped apples in small bites. “Now, he barks if I ignore him. He likes to be pampered.” 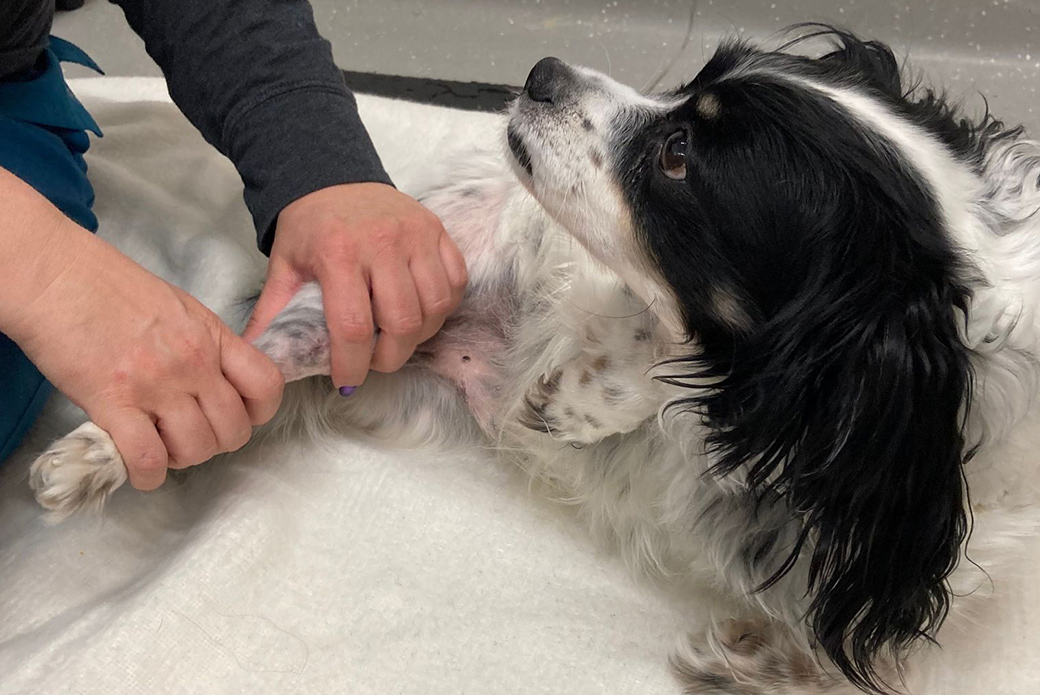 Because of COVID restrictions, in-person visits with Bailey’s family were limited during his recovery. Dr. Crowley updated James and Desiree through phone calls, while Melissa Alejandro, Manager of Administration, and Christa Fagliarone, Administrator, conducted Facetime visits for Bailey, James and Desiree.

“We appreciated that so much,” says Desiree. “I just missed my little Munchkin! Pepper moped around. It was so sad—they’re so used to each other.”

Bailey and his family were reunited on May 19 in the lobby of the ASPCA Adoption Center. To ensure a smooth transition, Sara Xing Eisenberg, Behavior Coordinator, first re-introduced Pepper and Bailey on an outdoor terrace. 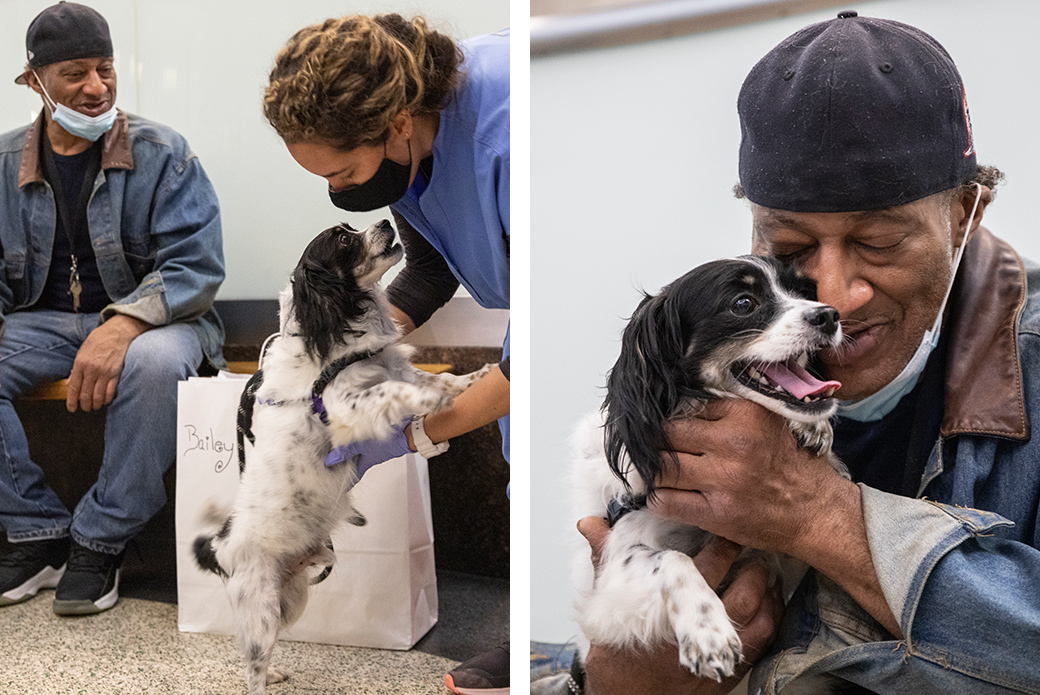 Then Erica brought Bailey downstairs, where James was waiting. Karina Sayers, Floor Manager at ARC, and Christa were also on hand with a bag of supplies for Bailey and Pepper while James Facetimed Desiree at home.

“Are you ready to come home?” James asked.

“I know Bailey missed his family, but we tried to make up for it by giving him extra love,” says Devon. “I’m amazed at how resilient animals can be after traumatic events like this. He was so trusting, and his sweet demeanor helped his recovery.”

Desiree says she and James have had both dogs since they were puppies.

“They’re like our children,” she says. “We love them so much, and we’re so happy we’re all together again.” 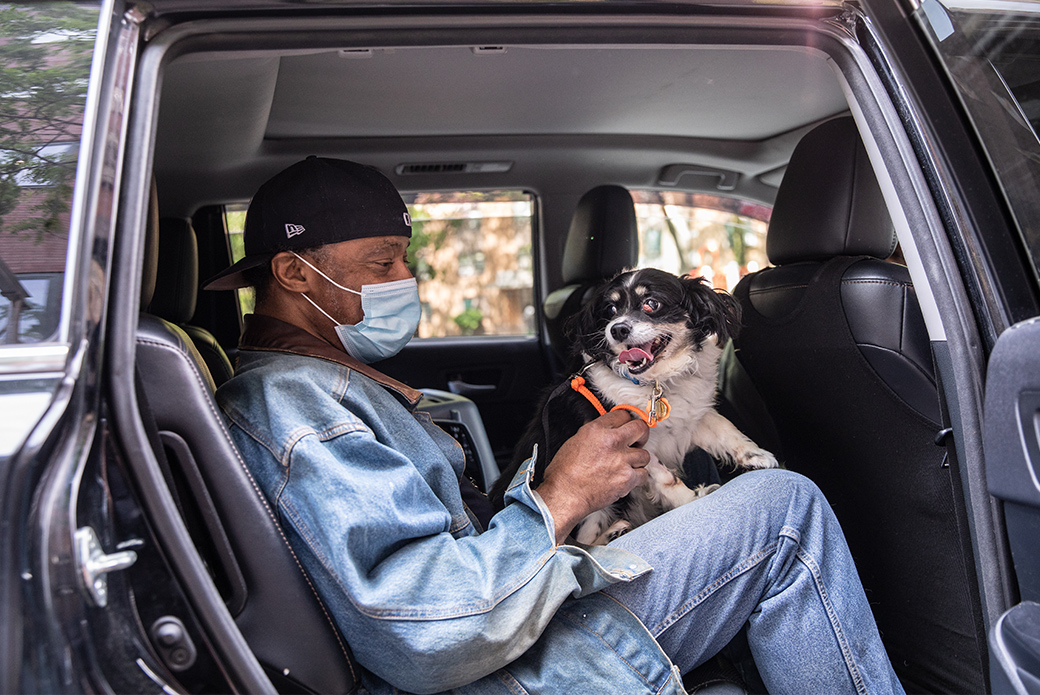 Previous: Study shows probability of getting COVID for mask wearers vs. non-mask wearers
Next: Cannabidiol effective for young people with treatment-resistant anxiety, according to pilot study
Pet Care News