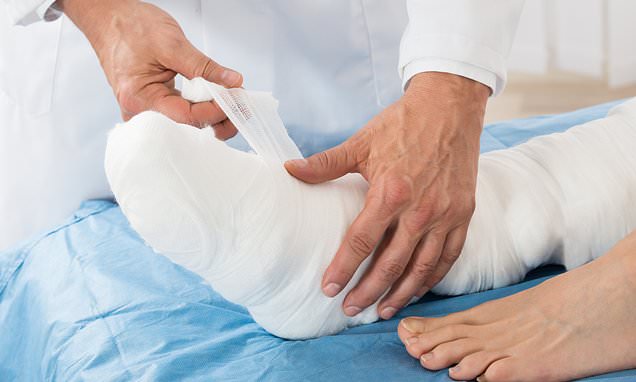 You do NOT need to spend six weeks in a cast if you fracture your ankle – three weeks is plenty, researchers find

Three weeks in a cast may be just as good as six for healing a broken ankle, research suggests.

A trial among 250 people with ankle fractures found they recovered just as well after three weeks than the conventional treatment time of six.

The researchers, writing in the British Medical Journal, said a shorter immobilisation period was easier for patients and cheaper for hospitals. 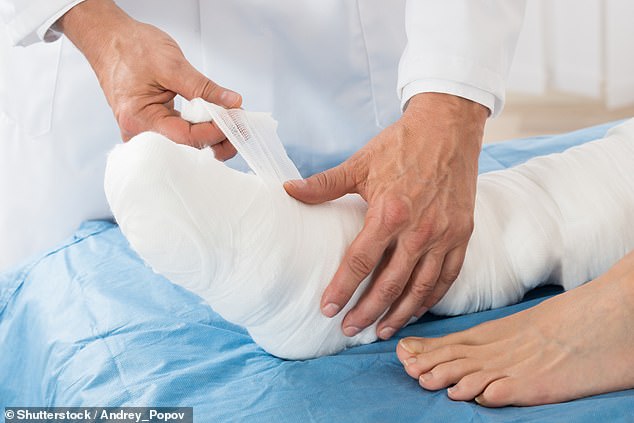 Prolonged immobilisation also increases side effects such as including stiffness, skin damage and blocked blood vessels.

The researchers, from the Oulu University Hospital tracked 247 patients with an average age of 45.

All had sustained stable ankle fractures, none of which required surgery.

Some 84 patients had the conventional six week cast, 83 people spent three weeks in a cast, and 80 people wore a simple ankle brace for three weeks.

They had follow up appointments at 6, 12 and 52 weeks to measure ankle fracture symptoms.

After a year, the assessments showed those who had the cast or even the brace for three weeks were no worse than those who wore a cast for six weeks.

And their mobility was slightly better.

They wrote: ‘A shorter, three week period of immobilisation, either by cast or a simple orthosis, proved non-inferior to traditional six weeks of cast immobilisation.’

Two genes in stags that allow them to regrow their antlers every year could be used to treat human bone conditions, researchers hope.

When comparing stem cells in deer antlers to human bone marrow, the researchers found genes that just seem to be expressed in antlers.

And two genes in particular were found to drive the abnormally fast growth rate of antlers, which enlarge at an astonishing 2cm a day during the summer.

The first gene – uhrfl – supports the division of bone cells, while the second – s100a10 – is responsible for the hardening of bone tissue.

When the researchers expressed these two genes in mice, they saw an increase in cell multiplication and bone density.