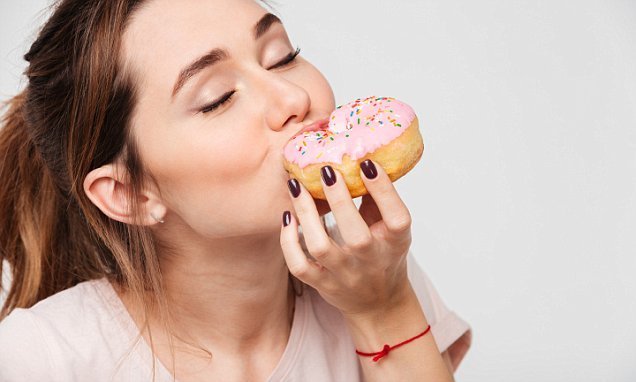 Don’t drink water if you’re eating a doughnut! Combining sweet treats with a drink gives you a bigger sugar high

Drinking water while eating a doughnut may give you a bigger sugar spike than is considered healthy.

Researchers analysed blood sugar levels of people eating jam doughnuts with or without water by their side.

Scientists from Suriname in South America found those who washed their sweet treat down with water had higher levels.

And their sugar levels were higher even than people who eat two doughnuts in the same time period without water.

Blood sugar levels are meant to spike after eating. But if levels reach too high, it can lead to obesity and even type 2 diabetes. 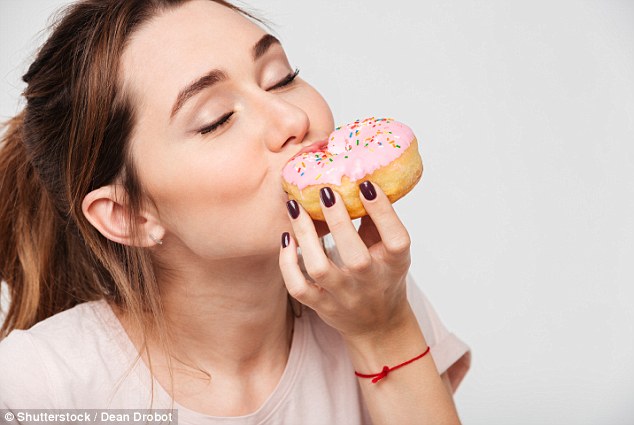 Drinking water at the same time as eating causes blood sugar to rise more than if you drink before or after, according to scientists in South America

Experts say water helps the body to absorb glucose and suggest drinking before or after food instead to minimise the sugar’s effects.

And although the Anton de Kom University study only involved eating doughnuts, it suggests the principle applies to other foods, too.

Blood sugar levels were tested in a group of 35 people who ate a jam doughnut and drank water before, during or after eating, or didn’t drink at all.

People who drank alongside the snack had the biggest spike in levels of glucose in the blood – their levels rose nearly twice as fast as those in other groups.

High blood sugar levels can be a cause for concern for doctors because the body can become desensitised to it and lose the ability to properly regulate levels in the blood, which leads to diabetes. While too much glucose can also lead to the body producing more insulin, which tells the body to store some sugar as fat.

Scientists suggest drinking before or after eating

The South American researchers suggest people should try to avoid drinking at the same time as they eat in order to reduce the impact of eating sugar.

Instead, drinking half an hour after eating the doughnut caused the smallest rise in sugar of all the categories.

Drinking beforehand led to a slightly bigger rise than no water at all, and eating two doughnuts caused a bigger spike than all categories except drinking at the same time.

‘Drinking with meals is a habit, not good practice’

The authors suggest water could make it easier for the body to absorb glucose, and wrote: ‘A quick search on the internet reveals that the abundance of sites encourage the drinking of water during or shortly after our meals.

‘Rather than being good practice, this is more of a cultural habit.

‘We suggest that drinking during and shortly after meals should ideally be kept to the minimum.’

Their research was published in the journal Clinical Nutrition ESPEN.

WHY IS IT IMPORTANT FOR DIABETES PATIENTS TO MEASURE THEIR GLUCOSE LEVELS?

Diabetes is a serious life-long condition that occurs when the amount of sugar in the blood is too high because the body can’t use it properly.

Patients have to regular monitor their glucose levels to prevent them from developing any potentially fatal complications.

Blood glucose levels should be between the ranges of 3.5–5.5mmol/L before meals and less than 8mmol/L, two hours after meals.

Hypoglycemia (when blood sugar drops below 4 mmol/L) can occasionally lead to patients falling into comas in severe cases.

However, it most often can be treated through eating or drinking 15-20g of fast acting carbohydrate, such 200ml of Lucozade Energy Original.

Sufferers can tell they are experiencing a hypo when they suddenly feel tired, have difficulty concentrating or feel dizzy.

Type 1 diabetes patients are more likely to experience a hypo, because of the medications they take, including insulin.

Hyperglycemia (when blood sugar is above 11.0 mmol/L two hours after a meal) can also have life-threatening complications.

It happens when the body either has too little insulin, seen in type 1, or it can’t use its supply properly, most often in type 2.

In the short-term, it can lead to conditions including ketoacidosis – which causes ketones to be released into the body.

If left untreated, hyperglycemia can lead to long-term complications, such as impotence and amputations of limbs.