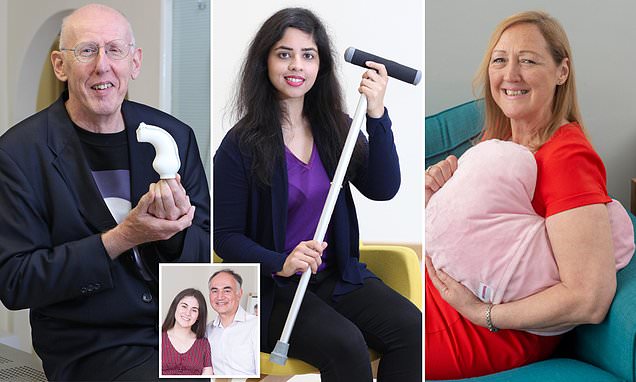 Move over Dyson! From a ‘talking’ walking stick to a unique cushion for post-op pain, the life-changing inventions dreamed up by those who need them most

He’s best known as the author of Charlie And The Chocolate Factory and James And The Giant Peach, but Roald Dahl also had a claim to medical fame.

When his baby son Theo developed water on the brain after a taxi crashed into his pram, Dahl worked with a model plane enthusiast and a neurosurgeon to create a fluid-draining shunt. Theo already had a shunt, but it kept blocking, so his father set about designing a better one.

The Wade-Dahl-Till valve helped 3,000 children around the world before being superseded by more modern devices.

Many medical inventions have been developed by patients or their loved ones as a result of their experiences. Here, four inventors whose pioneering health products have changed lives — or are about to — share their stories.

Neha Chaudry, 26, lives in Bristol. She developed a ‘smart’ stick for people with Parkinson’s disease after watching her grandfather struggle to walk. £159 (trial offer), walktobeat.co.uk 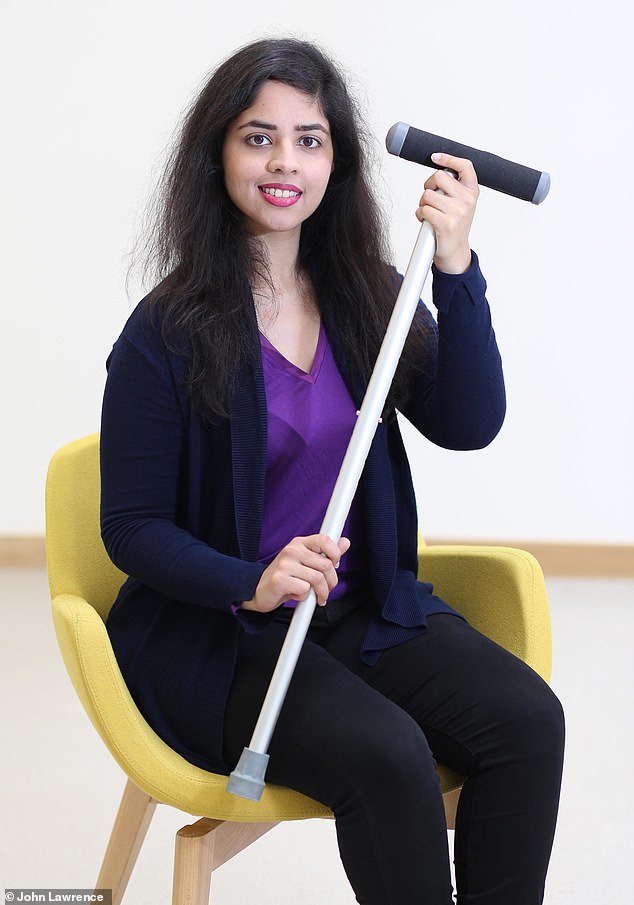 Grand designs: Neha Chaudry, 26, from Bristol, developed a ‘smart’ stick for people with Parkinson’s disease after watching her grandfather struggle to walk

My grandfather had Parkinson’s when he was in his 70s and, like around a third of people with the condition, he would suddenly freeze while he was walking. It isn’t known why this happens.

He would try to step forward, but it was as if his feet were glued to the ground. He had two falls as a result and stopped going out, which was really sad.

Seeing him struggle stuck with me, so for my design project in the final year of my product design degree, I decided to create something to help people like him.

I spent four months talking to patients at the charity Parkinson’s UK who told me how frustrating and frightening this ‘freezing’ could be. I also met neurologists and physiotherapists. I read about how listening to a rhythm can help patients come out of a freezing episode — so I designed a walking stick that starts to vibrate if a person freezes.

It looks like a standard walking stick but a sensor in the handle tracks the user’s walking pattern and picks up changes in their gait — shorter, faster steps and extra pressure on the handle, occur just before freezing.

This triggers a motor in the stick that makes the handle vibrate — the rhythm provides the prompt patients’ need to start walking.

Experts at the Bristol Robotics Laboratory helped with the electronics and I tested it on 20 or 30 patients as I developed it. One woman said she calls it her walkie-talkie because it tells her when to walk again. I launched the Smart Stick in the UK this month — I just wish my grandfather had lived long enough to use it.

EXPERT VERDICT: ‘This is a very good idea,’ says Dr Paresh Malhotra, a neurology researcher at Imperial College London. Freezing is common in Parkinson’s and is distressing. A rhythm can help some people, it isn’t certain why but it may be that movements start to synchronise with the external rhythm, letting people start walking again.’

Tal Golesworthy, 62, a chartered engineer, lives in Cheltenham with his wife Teresa, 60, a retired office manager. He invented an implant to fix his own heart, exstent.com 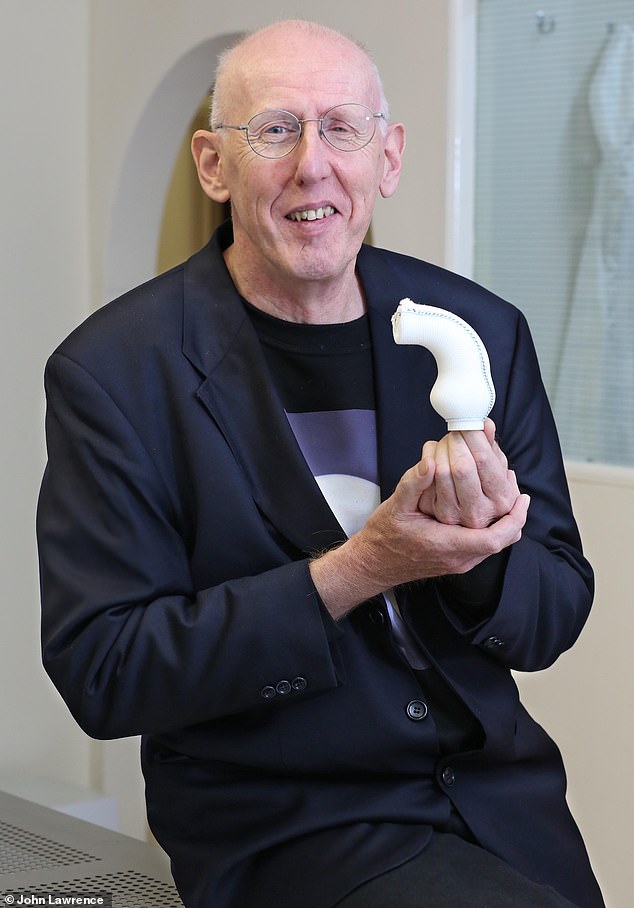 Smart guy! Tal Golesworthy, 62, a chartered engineer from Cheltenham, invented an implant to fix his own heart after being told his aorta was enlarged and could burst at any time

I was 35 when I was told my aorta (the artery ferrying oxygenated blood out of the heart) was enlarged and could burst at any time, leading to fatal internal bleeding.

It was a shock, I hadn’t had any symptoms and led an active, healthy life — I loved skiing and played bass in a band. Suddenly I faced open-heart surgery.

The operation I was lined up for was a total aortic root replacement, during which a 12cm section of the aorta and the accompanying valve [which controls flow of blood out from the aorta to the rest of the body] are removed and replaced with synthetic versions.

What scared me most was the idea of taking anti-clotting medication for the rest of my life to keep the artificial valve free of the blood clots they are prone to. It’s a tightrope between life-threatening bleeds (with too high a dose) and dangerous blood clots (with too little) and I thought there must be a better way.

I used my engineering skills to create a sleeve to fit round the outside of my swollen aorta, stopping it getting bigger or bursting.

I discussed it with my doctors and had to get ethical approval to try out my solution. I gained the backing and trust of several cardiothoracic surgeons and, in May 2004, Professor John Pepper at the Royal Brompton Hospital in London performed the first personalised external aortic root support (PEARS) operation, on me.

I had scans to help create a 3D mould used to make a light polyester sleeve. It was inserted around the aorta and valve under general anaesthetic. The op takes two hours and has now been carried out 226 times in eight countries.

Like me, most of patients have Marfan syndrome, a genetic disorder of the connective tissues that can cause a weakened and enlarged aorta. Making a difference to so many lives is something I never imagined.

EXPERT VERDICT: ‘PEARS surgery is designed to support the part of the aorta closest to the heart in individuals with Marfan syndrome,’ says Dr Athanasios Saratzis, associate professor of vascular surgery at the University of Leicester.

‘A handful of studies found it to be feasible and safe. We don’t know how it compares to conventional treatment long term, but it is a perfect example of how patients can use their expertise to help themselves and others.’

Sheila Logan, 60, works in sales and lives near Glasgow. She has two adult children, and developed a padded shoulder bag to shield her wounds after breast cancer surgery. £29, tendercush.co.uk 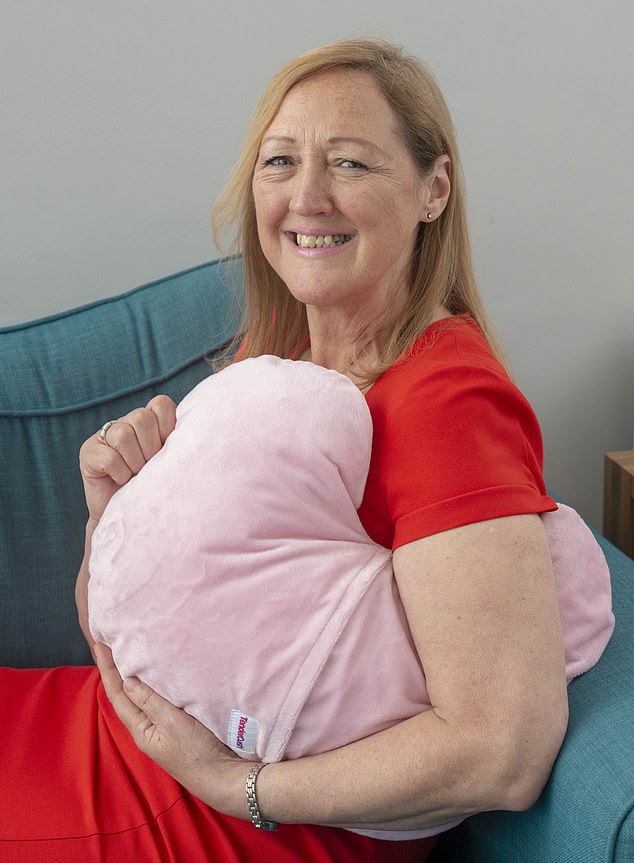 Bag it up: Sheila Logan, 60, from near Glasgow, developed a padded shoulder bag to shield her wounds after breast cancer surgery

Diagnosed with breast cancer ten years ago, I had surgery to remove the tumour from the back of my left breast as well as lymph nodes under my arm, leaving two painful wounds. It was hard to sleep, lying on my left side put pressure on my wounds, but if I turned onto my right, the weight of my breast pulled and hurt, too.

I couldn’t find anything to make myself comfortable, so I made a cushion myself to put under my arm in bed. It took pressure off my wounds when lying on my left side and supported my breast if I was on my right, and helped me sleep.

I dreaded going shopping in case someone bumped into me, so, I made a padded shoulder bag with an adjustable strap that let it hang at the height of my wounds, shielding them from bumps.

The back was fully cushioned, with Velcro to fasten it because I had lost feeling in my fingers while having chemotherapy, which made it difficult to do up buttons.

I set up TenderCush in 2012 to make cushions and bags for other women in their time of need.

EXPERT VERDICT: ‘A bag that shields the wounds like this could be very useful, particularly after a mastectomy,’ says Professor Ash Mosahebi, a consultant plastic surgeon in Harley Street and the Royal Free Hospital in London.

‘Chemotherapy may damage the nerves in the hands, so the fastening is a nice touch.’

Reza Razavl, 53, is a consultant paediatric cardiologist at the Evelina London Children’s Hospital, and lives in North London with wife Angela, 54, a GP, and their four children. 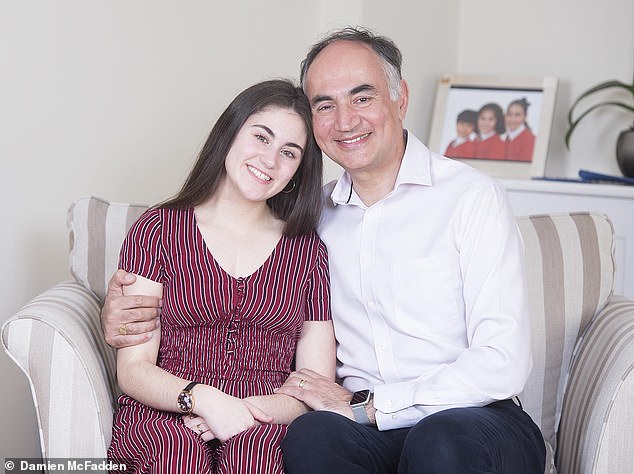 Daddy cool: Reza Razavl, 53, is a consultant paediatric cardiologist at the Evelina London Children’s Hospital, and lives in North London with daughter Poppy – who he helped save

He began developing heart scans for babies after his newborn daughter Poppy nearly died from a heart defect. Poppy’s 20-week ultrasound scan was normal but as soon as she was born it was clear something was wrong.

She was diagnosed with transposition of the great arteries, a serious defect where two main arteries leaving the heart are connected wrongly, stopping the body getting enough oxygen. she had three heart operations in her first month; we almost lost her twice.

She’s now 14 (pictured with Reza, right) and healthy; she sings, dances and plays the trumpet. The 20-week ultrasound scan spots 20 to 50 per cent of major heart defects. But being aware early could let treatment be planned earlier. With colleagues at King’s College London and Guy’s and st Thomas’ Hospital, I am developing a robot that

holds up to four ultrasound probes at once. We have also created 3D MRI images of babies in the womb to give an unrivalled view of the foetal heart. The scans have detected defects in 85 unborn babies and been used more than 200 times.

EXPERT VERDICT: ‘There has been improvement in prenatal diagnosis of heart defects,’ says Professor Basky Thilaganathan, spokesman for the Royal College of obstetricians and Gynaecologists. ‘Clearer images would help surgeons plan the best course of surgery after birth.’

WHAT IS PARKINSON’S DISEASE?

Parkinson’s disease affects one in 500 people, and around 127,000 people in the UK live with the condition.

It causes muscle stiffness, slowness of movement, tremors, sleep disturbance, chronic fatigue, an impaired quality of life and can lead to severe disability.

It is a progressive neurological condition that destroys cells in the part of the brain that controls movement.

Sufferers are known to have diminished supplies of dopamine because nerve cells that make it have died.

There is currently no cure and no way of stopping the progression of the disease, but hundreds of scientific trials are underway to try and change that.

Tags: By, dreamed, inventions, life-changing, Most, Need, the, Them, Those, Up, Who

Previous: Big Ag Must Think Consumers Are Really Stupid
Next: How UHS uses availability and performance monitors to ensure Cerner is optimal for its physicians
Related posts
Pet Care News