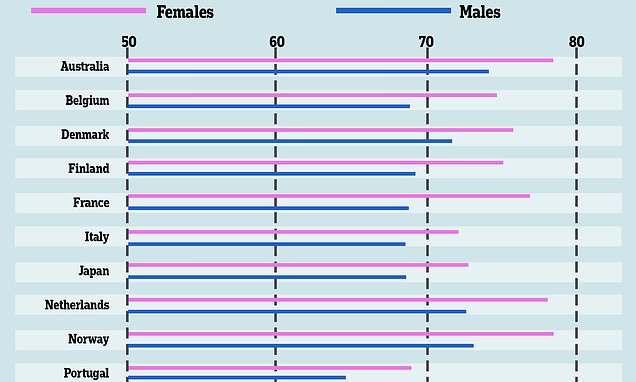 Revealed: Women in Switzerland live the longest in the world while Australia clinches the top spot for men, finds scientific review

Swiss women live the longest in the world, suggests a review of life expectancies from 15 major countries.

Females living in the land-locked European nation, famous for its quality watches and chocolate, can expect to live for 79.03 years.

In comparison, women in the UK and US have a life expectancy of 76.43 years and 76.08, ranking sixth and eighth, respectively.

Scientists at the University of Pennsylvania revealed Australia tops the charts for male life expectancy at 74.1 years.

Researchers said their measure of life expectancy paints a clearer picture of how long people today are expected to survive. 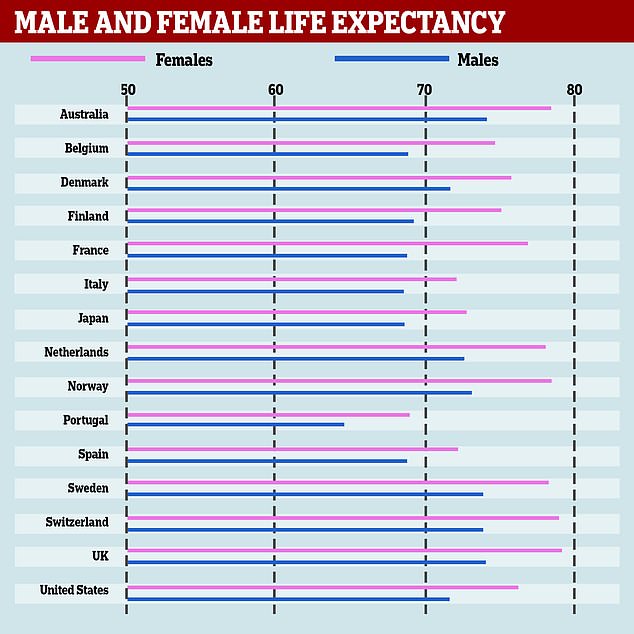 Swiss women live the longest according to a review of life expectancies from 15 major countries, according to a study. Australian nationals soar to the top of the league overall

These included Norway, Japan, Spain, Denmark and Belgium, the experts said in the paper in the journal Population Studies.

Australian women rank second at 78.9 years, with Norway coming in at third place at an average of 78.61 years.

Italy came bottom of the pile for women, with females from the nation famous for its cuisine living until they are 72.14, on average.

Men in the European countries of Sweden and Switzerland topped the chart in second (74.02 years) and third place (73.7 years).

Males from sunny Portugal only have a life expectancy of 64.77 years, placing them last out of the 15 countries.

Dr Collin Payne, Australian National University, who co-led the study, said: ‘Popular belief has it that Japan and the Nordic countries are doing really well in terms of health, wellbeing, and longevity. But Australia is right there.

‘The results have a lot to do with long term stability and the fact Australia’s had a high standard of living for a really, really long time.

‘Simple things like having enough to eat, and not seeing a lot of major conflict play a part.’

Japanese men’s life expectancy was measured at 68.52 years, while the women’s is 72.9 years.

The estimated life expectancies in this study are lower than official figures for the UK.

Males in the UK live 79.2 years from birth while it is 82.9 years for females, according to The Office for National Statistics.

WHERE DO WOMEN LIVE THE LONGEST?

WHERE DO MEN LIVE THE LONGEST?

This gave them an age at which someone can be considered an ‘above-average’ survivor.

Dr Payne said: ‘Most measures of life expectancy are just based on mortality rates at a given time.

‘It’s basically saying if you took a hypothetical group of people and put them through the mortality rates that a country experienced in 2018, for example, they would live to an average age of 80.

‘But that doesn’t tell you anything about the life courses of people, as they’ve lived through to old age.

‘Our measure takes the life course into account, including mortality rates from 50, 60, or 70 years ago.’

CLE compares people who were born in the same year and therefore have lived through similar conditions, instead of comparing a person’s life expectancy with their grandparents.

Dr Payne said: ‘For example, any Australian man who’s above age 74 we know with 100 per cent certainty has outlived half of his cohort – he’s an above average survivor compared to his peers born in the same year.

‘And those figures are higher here than anywhere else that we’ve measured life expectancy.

‘On the other hand, any man who’s died before age 74 is not living up to their cohort’s life expectancy.’

Dr Payne said there are a number of factors which might’ve contributed to Australians reaching above all other countries.

‘French males, for example, drop out because a lot of them died during WW2, some from direct conflict, others from childhood conditions.’

Dr Payne is now hoping to get enough data to look at how rankings have changed over the last 30 or 40 years.

WHAT IS LIFE EXPECTANCY IN THE UK?

However, figures from the Institute of Faculty of Actuaries revealed in March 2019 that life expectancy in Britain for both men and women has fallen by six months compared to last year. 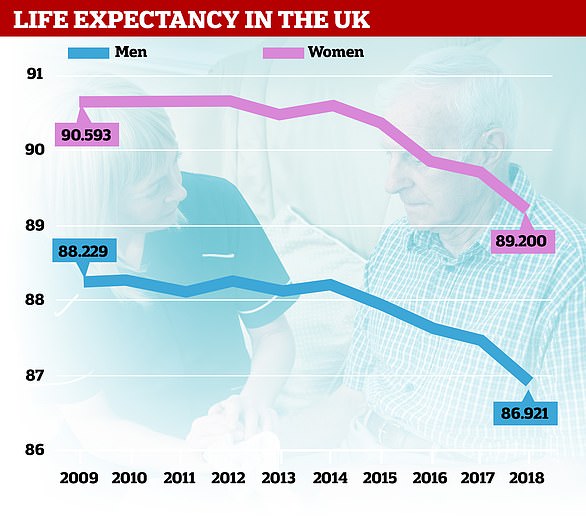 The group calculates life expectancy for pension providers, and expects men to live until 86.9 years and women to 89.2 years.

The data, produced annually and widely used to price products linked to life expectancy – like annuities, life cover and pension schemes – and could be a boost to insurers.

The institute declined to speculate on exactly why the forecasts showed lower life expectancy, but experts have pointed to the impact of austerity, cuts to the NHS, and rising rates of dementia, diabetes and obesity.