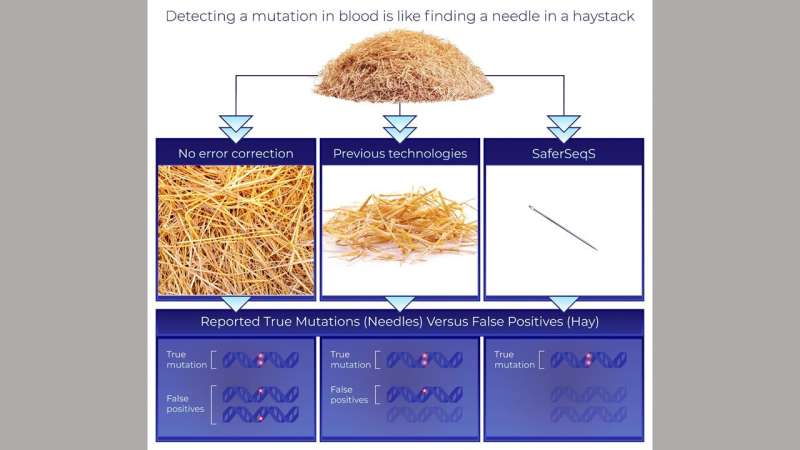 Next-generation gene sequencing (NGS) technologies—in which millions of DNA molecules are simultaneously but individually analyzed—theoretically provides researchers and clinicians the ability to noninvasively identify mutations in the blood stream. Identifying such mutations enables earlier diagnosis of cancer and can inform treatment decisions. Johns Hopkins Kimmel Cancer Center researchers have developed a new technology to overcome the inefficiencies and high error rates common among next-generation sequencing techniques that have previously limited their clinical application.

To correct for these sequencing errors, the research team from the Ludwig Center and Lustgarten Laboratory at the Johns Hopkins Kimmel Cancer Center developed SaferSeqS (Safer Sequencing System), a major improvement to widely used technologies based on a previous technology called SafeSeqS (Safe Sequencing System) that Hopkins investigators invented a decade ago. The new SaferSeqS technology detects rare mutations in blood in a highly efficient manner and reduces the error rate of commonly used technologies for evaluating mutations in the blood more than 100-fold.

Their findings were reported May 3 in Nature Biotechnology.

The presence of a mutation in a clinical sample could be an early indicator that a person has developed cancer, says study lead author and M.D./Ph.D. candidate Joshua Cohen. Cancer is a genetic disease, driven by oncogenes and tumor suppressor genes. A small portion of cancer cells shed their DNA into the bloodstream, allowing their mutations to be detected via blood sample. Detecting such mutations in blood rather through surgical biopsy of a cancerous tissue is called “a liquid biopsy.” Such blood-based tests have the potential to detect cancer at an earlier stage, when it can be put into remission by surgery and/or chemotherapy. The challenge, Cohen explains, is that the vast majority of DNA present in the blood sample is shed by noncancer cells, and only a tiny fraction of the DNA is derived from the tumor. In patients with relatively early-stage cancers, a 10 mL blood sample will only contain a handful of molecules with a mutation.

“To detect cancers when they have the best chance of being cured requires a detection method that will pick up cancer signals that are present at extremely low frequencies,” says Cohen. “The technical challenge in detecting these mutations is akin to finding a needle in a haystack.”

The researchers addressed this challenge with SaferSeqS, by efficiently tagging both strands of each original molecule present in an individual’s blood with a unique barcode. It required new biochemical approaches to do this in an efficient manner with the small number of degraded DNA molecules that are usually present in blood. The investigators use the structural redundancy of the double-stranded DNA molecule to distinguish real mutations from errors, an approach called duplex sequencing. If both strands of a DNA molecule contain the identical mutation, it is far more likely that it is a real mutation and not an error.

“What makes SaferSeqS unique is the efficient tagging of both strands of the majority of DNA molecules circulating in the blood, the low error rate achieved through analysis of both strands of these DNA molecules, and the manner in which the molecules of interest are enriched prior to sequencing. Altogether, these advancements underlie the power of the new technology,” says Cohen.

“Every molecule is sacred because it has the potential to be the one with the mutation we’re looking for,” says Cohen. “Because the absolute number of molecules is low, the technology has to be highly efficient at capturing each molecule to sensitively identify mutations.”

To test the specificity and sensitivity of SaferSeqS in a clinically relevant setting, the researchers compared the samples to previous results from the CancerSEEK test, a single blood test that screens for eight common cancer types, developed and reported by the same research team (Science, 2018).

The researchers revisited 74 blood samples from patients with cancer that had false negative results—undetectable mutations—in the 2018 CancerSEEK study using SafeSeqS. In their newest study describing SaferSeqS, the researchers reassessed these blood samples. Using SaferSeqS, they observed a marked improvement in sensitivity, finding previously undetectable mutations in 68% of the samples tested.

Taking these results together, the researchers conclude that SaferSeqS is highly sensitive and specific for detecting extremely rare cancer-related mutations, is potentially efficient and cost effective for clinical use, and reduces the error rate of existing mutation-detection approaches more than 100-fold.

The next step, they say, is to validate the results and demonstrate the clinical usefulness of the technology in prospective clinical trials.