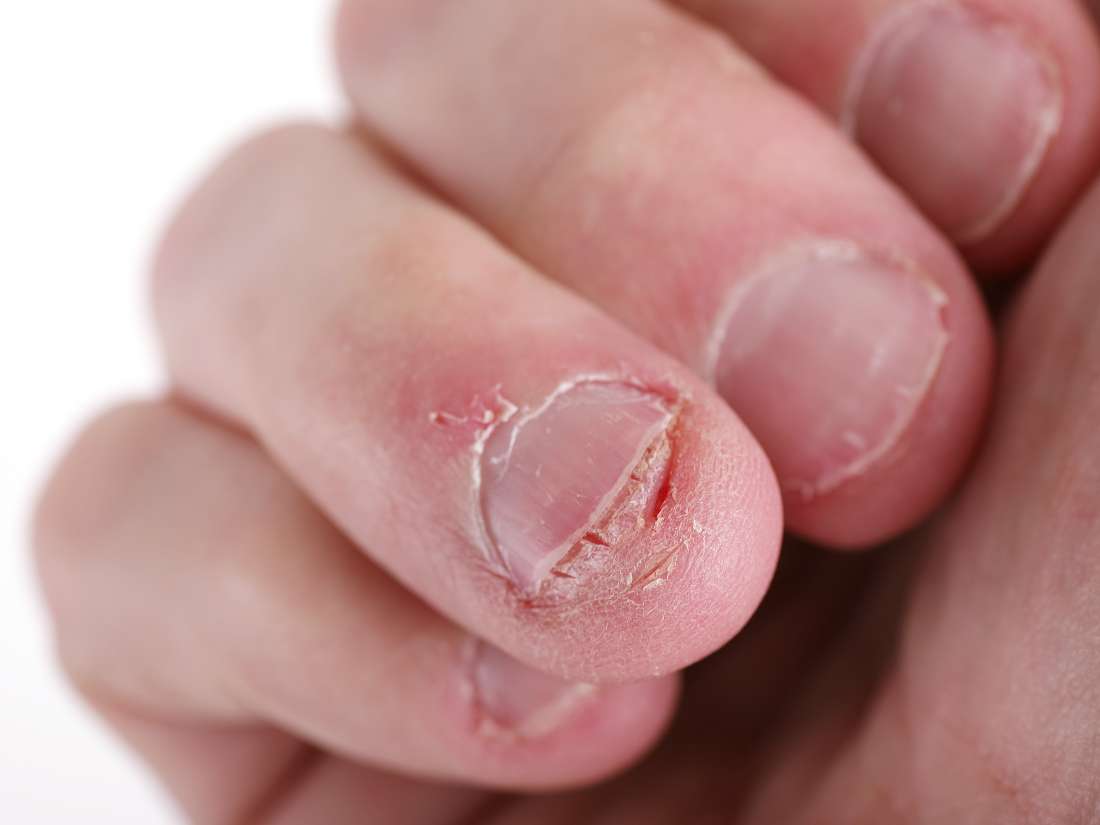 A person’s nails can say a lot about the state of their health.

Nail abnormalities, in most cases, are not serious and can be easily treated. In other cases, a health condition that may need medical attention and treatment might be the cause.

In this article, we give a list of nail abnormalities along with their potential causes and pictures. We also discuss how to take care of the nails and when to see a doctor.

Vertical ridges and brittle patches can develop due to aging or minor injuries. Other abnormalities, such as discoloration, spots, and nail separation, may develop as a result of infections, injuries, or some medications.

In many cases, the skin condition known as psoriasis causes nail abnormalities. An estimated 50 percent of people with psoriasis may have nail psoriasis.

Otherwise, trauma to the nail may lead to abnormalities that can result in discoloration, spots, or changes to the nail.

Changes in or around the fingernails and toenails can have many other causes, which we discuss below:

Cracked or split nails are dry and brittle with possible cracks or splits. If someone’s nails are easily damaged, this can be a sign of malnutrition or a skin disorder.

Lifestyle factors can also contribute, such as working with the hands or having the hands in water for long periods of time.

Cracked or split nails may also be a sign of:

Non-uniform white spots and lines on the nails are characteristics of leukonychia.

These spots are harmless and minor trauma to the nail is usually the cause. Sometimes, especially when ongoing, they can be the result of:

Beau’s lines are depressions across the fingernail. They may be a sign of:

Transverse white lines on the nails are called Mees’ lines.

They may be the sign of arsenic or carbon monoxide poisoning or may occur when someone is having chemotherapy.

Koilonychia is characterized by fingernails that are spoon-shaped, with raised ridges and a scooped out depression.

Small depressions and little pits in the nail is called pitting.

These changes in a person’s nails are often the result of:

Clubbing is a thickening and curving around the fingertips. Clubbed nails can take years to develop.

Low blood oxygen levels can cause of nail clubbing. Reasons for this deficiency include:

Bluish nails have a blue or blue-like tint due to not enough oxygen in the body.

This can be the result of:

Onycholysis is a white discoloration of the nails that happens when the nail plate and the nail bed separate.

Causes of onycholysis may include:

A greenish-black color to the nail is the primary feature of paronychia. It is usually a sign of a bacterial nail infection.

Having a dark band on each nail is characteristic of Terry’s nails.

Terry’s nails can be the result of:

Ram’s horn nails are thickening and overgrowth of the nails.

People with yellow nail syndrome have nails that are yellow, thicker than usual, and do not grow as fast as healthy nails.

Yellow nail syndrome can be the result of:

People can have gnawed nails when they bite their nails consistently for a long period of time. Compulsive nail biting or picking is sometimes linked to:

People’s nails can turn pale or light in color if they have a nutritional deficiency or a circulation problem that stops the blood from reaching the fingertips.

Nails that look very pale may be a sign of:

Lindsay’s nails are also known as half and half nails. One part of the nail is white while the other part is pink, red, or brown with a sharp line dividing the two halves.

People who have Lindsay’s nails may have one of the following conditions:

Red and puffy skin around the nails is characteristic of puffy nail folds. The skin may appear inflamed.

People may notice puffy nail folds if they have:

Pay attention to any changes or problems, and seek medical attention when needed.

Nail abnormalities can come in many forms, and the ones described here are just some signs and types of abnormalities a person may experience.

To determine the reason behind a nail abnormality, people should visit a doctor for diagnosis and treatment.

Previous: Exclusive: Kylie Jenner's Hairstylist Spills the Tea on How He Took Her Golden Blonde for Her Birthday
Next: ACS Briefing Discusses Use of Lessons From Combat Care
Related posts
Pet Care News