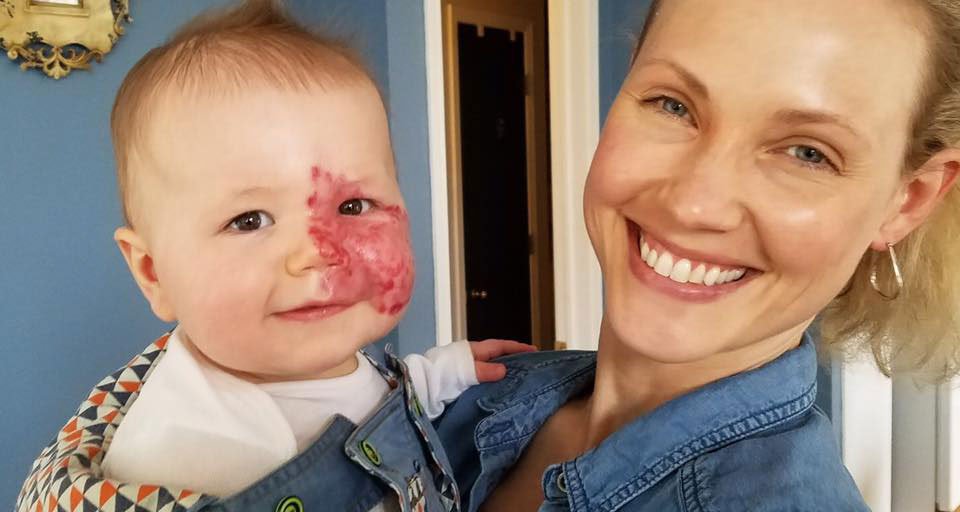 A new mum has drawn the support of thousands of strangers after opening up about her daughter’s prominent port-wine stain.

Iowa news anchor Elizabeth Klinge took to Facebook on Thursday to share snaps of adorable 14-month-old, Hanalay, who is currently undergoing treatment for a birthmark that covers half of her face.

“Another successful laser treatment for Hanalay yesterday in Iowa City,” she captioned a series of selfies of the pair.

“This was treatment number for on her port-wine stain, and each time it seems to get a little easier (for both of us). After a good nap on the drive back home, she’s back to her lively little self!”

“Thank you for sharing these pictures,” one follower penned. “Glad there are treatments but it breaks my heart thinking this little one has to go through all this.”

“Bless you for sharing your journey. I am sure it has given hope to other parents walking this journey too,” added another.

Elizabeth went on to explain that Hanalay will have another four treatments in the next 12 months and will require one or two each year as maintenance.

According to Mayo Clinic, port-wine stains are caused by an abnormal formation of blood vessels in the skin and are present from birth.

In rare cases, it can signal serious complications such as the neurological disorder Surge-Weber syndrome.

Commonly called firemarks, port-wine stains most often appear on the face and typically get darker in colour and more irregular in texture as the child grows.

While they are considered permanent, lasers can be used to fade the discolouration over time.

“Most commonly, it’s a harmless process, but in rare instances it can cause problems with bleeding and lead to infection,” Gary Goldenberg, MD, assistant clinical professor of dermatology at the Icahn School of Medicine at Mount Sinai NY, tells Yahoo Beauty.

“I often advise my patients to treat these as young adults, when laser isn’t a traumatic procedure.”