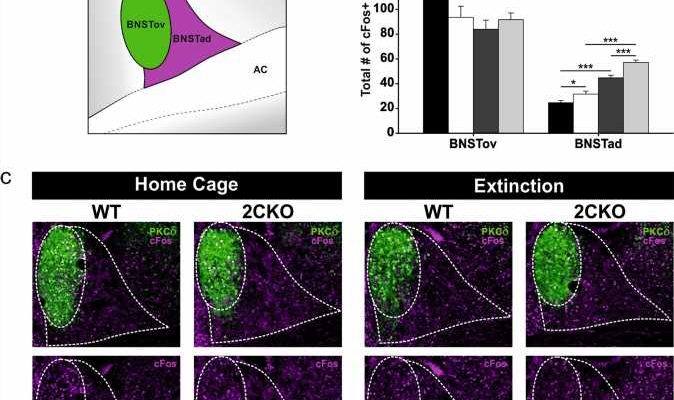 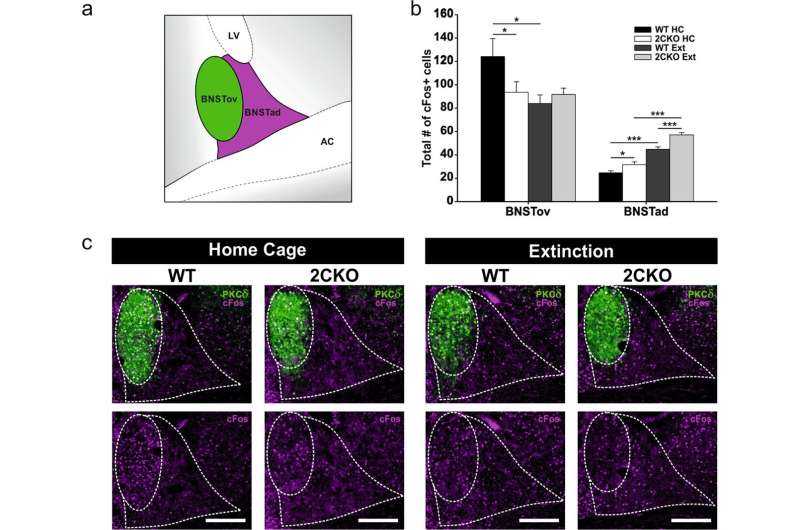 The neurotransmitter serotonin plays a key role in both the onset and in the unlearning of fear and anxiety. A research team from the Department of General Zoology and Neurobiology headed by Dr. Katharina Spoida and Dr. Sandra Süß in the Collaborative Research Center “Extinction Learning” at Ruhr University Bochum, Germany, has been investigating the underlying mechanisms.

The researchers showed that mice lacking a specific serotonin receptor unlearn fear much faster than the wild type. The results of the study provide a viable explanation how drugs that are typically used for the treatment of post-traumatic stress disorder (PTSD) alter our brain activity. The ability to unlearn fear is often impaired in PTSD patients, making it more difficult to carry out therapies. The study was published in the journal Translational Psychiatry on November 19, 2022.

People who have been affected by a traumatic experience sometimes suffer from a long lasting exaggerated fear response. In such cases, the fear response is triggered by certain sensory impressions that occur in our everyday environment and which then can become overwhelming. Experts refer to this condition as post-traumatic stress disorder (PTSD).

In this disorder, it is not possible, or only with difficulty, for affected individuals to unlearn the once-learned connection between a neutral environmental stimulus and the learned fear response, which impairs the success of therapies.

Knowing that the neurotransmitter serotonin plays an important role in the development of fear, the research team explored its role in extinction learning, i.e., the unlearning of fear, in greater detail. To this end, they examined so-called knock-out mice that lack a certain serotonin receptor—the 5-HT2C receptor—due to genetic modifications.

These mice learned in one day to associate a certain sound with a mild but unpleasant electrical stimulus. “As a result of this learning process, on the following day they showed a fear response that was characterized by a motionless pause as soon as the tone was played, which we refer to as ‘freezing,'” explains Katharina Spoida.

Absence of the receptor is an advantage

In the next step, the researchers repeatedly played the tone to the mice without applying the electrical stimulus. “Interestingly, we noticed that knock-out mice learned much faster that the tone does not predict the fear stimulus than mice who lacked this specific genetic modification,” says Katharina Spoida. “Consequently, it looks like the absence of the serotonin receptor provides an advantage for extinction learning.”

The researchers investigated this phenomenon in more detail and found that the knock-out mice showed changes in their neuronal activity in two different brain areas. One of these is a specific sub-region of the dorsal raphe nucleus (DRN), which is typically the main site of serotonin production in our brains. In addition, the researchers discovered aberrant neuronal activity in the so-called bed nucleus of the stria terminalis (BNST), which is a part of the so called extended amygdala.

“In the knock-out mice, we first found an increased basal activity in certain serotonin-producing cells of the dorsal raphe nucleus. In a subsequent step, we showed that the absence of the receptor also alters neuronal activity in two subnuclei of the BNST, which ultimately supports extinction learning,” says first author Sandra Süß. The research results also indicate a connection between the two brain regions, which leads the scientists to assume that an interplay is significant for improved extinction learning.

The results of the study may reveal how drugs typically used in the treatment of PTSD affect the brain regions analyzed in this study. “There are already drugs in clinical use that regulate the amount of available serotonin, so-called selective serotonin reuptake inhibitors, or SSRIs for short,” points out Katharina Spoida.

“Taking these drugs over a prolonged period of time causes the relevant receptor to become less responsive to serotonin, similar to our knock-out model. Therefore, we assume that the changes we’ve described could be essential for the positive effect of SSRIs,” adds Sandra Süß. The researchers hope that their findings will help to develop more targeted treatment strategies for PTSD patients in the future.