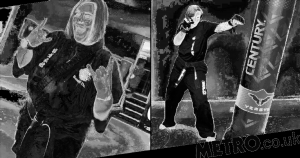 Dee Hunter loves martial arts and has spent years teaching people how to get fit with the exercise.

But at a UK size 24, she couldn’t do some of the moves herself and when she quickly got breathless in class she felt like a hypocrite.

Her diet consisted of sugary drinks and takeaways almost every night, as the 36-year-old had got into the habit of using food for comfort after a difficult childhood.

A year and a half ago, she decided enough was enough. She wanted to eat a healthier diet and actually practice the martial arts she was teaching.

Now a size 16-18 and getting smaller, Dee, from Newcastle, wants to use what she’s learned to show people how to diet in a healthy way if they want to lose weight.

She tells Metro.co.uk: ‘I felt I couldn’t be a role model to the people I was teaching martial arts to when I was size 24.

‘I looked in the mirror one day and realised I was just getting bigger and bigger.

‘I just started eating a proper diet and actually doing some exercise. It was about changing my mindset and my lifestyle.

‘Slowly, the weight started to come off and now, a year and a half on, I have dropped almost four dress sizes.’

Dee started putting on weight when her family moved from the countryside to the city, and she says they faced abuse from neighbours for being different.

She explains: ‘I was seven years old and people threatened us with knives. We had bricks thrown through the window and fireworks put through our letterbox.

‘My family was victimised because we weren’t like everyone else as we had lived a quite isolated rural life.

‘With that, we were also bullied at school and even when I went to a new school, I was bullied there too. Everything really knocked my self-confidence.’

By the time she was a teenager, Dee was a size 10-12 but she started to gain weight because of the problems she had faced when she was younger.

She explains: ‘I was depressed after everything. Things were better because we finally moved and I started to learn martial arts and stick up for myself but I just had no self-esteem.

‘I didn’t want to eat in front of people so I would wait until I was at home, behind closed doors and just raid the cupboards in secret. I would just eat and eat when I was by myself and no one could see.

At 18, Dee started drinking and going out with friends and with more calories coming from alcohol as well as her diet, she gained more weight.

She went to Northumbria University after finishing school and started partying even more, leading to her size gradually increasing.

During her time at university, Dee says she was sexually assaulted and later raped, although her attackers were never convicted.

The incidents caused her depression to return and she started to suffer from panic attacks, turning to food again for comfort.

Recognising Dee was spiralling deeper into depression, her brother Darren, who set up Solo Studios, tried to help by helping her learn more martial arts.

Dee went on to earn her black belts and her self-confidence improved, eventually working at Solo Studios as a child development coach.

But Dee says that her lifestyle hadn’t changed and she was still putting on weight because of what she was eating.

She explains: ‘I was stuck in the same habits I had been following for years.