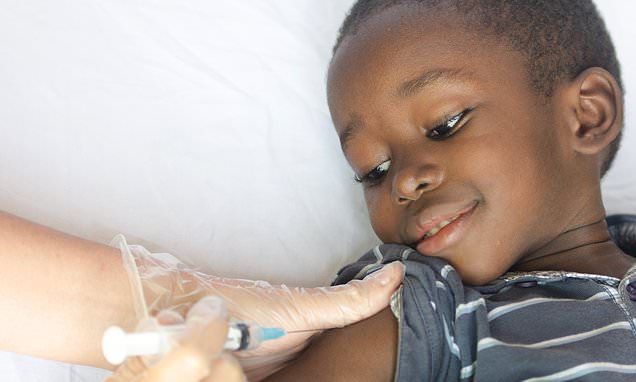 World’s first malaria vaccine that could save ‘tens of thousands of children’s lives’ every year to be given to 360,000 children in three African countries in ‘historic milestone’

Around 360,000 vulnerable youngsters in Africa are to be given the world’s first malaria vaccine in a ‘historic milestone’.

Experts have hailed the move, which will see children in Malawi, Kenya and Ghana immunised against the infection from today.

The jab – known as RTS,S – offers partial protection from the infection, with trials suggesting it prevents four in ten cases.

The vaccine has the potential to save ‘tens of thousands of children’s lives’ every year, according to experts. 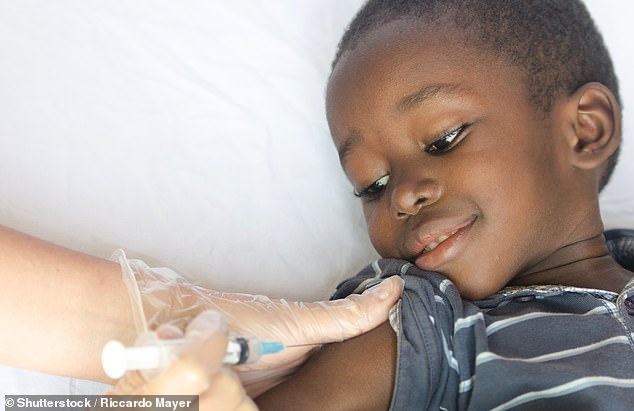 Malaria is one of the world’s biggest killers, claiming the life of a child every two minutes, according to the World Health Organization (WHO).

Most of these deaths occur in Africa, where 250,000 youngsters die from the disease every year.

‘We have seen tremendous gains from bed nets and other measures to control malaria in the last 15 years,’ said Dr Tedros Adhanom Ghebreyesus, the WHO’s director-general.

‘But progress has stalled and even reversed in some areas.

‘We need new solutions to get the malaria response back on track and this vaccine gives us a promising tool to get there.

‘The malaria vaccine has the potential to save tens of thousands of children’s lives.’

Studies conducted between 2009 and 2014 in Africa revealed four doses of RTS,S led to ‘significant reductions’ in malaria and its complications.

The vaccine prevented four in ten ‘standard’ cases of the disease and three in ten severe ones.

Malaria is a life-threatening tropical disease spread by mosquitoes.

It is one of the world’s biggest killers, claiming the life of a child every two minutes, according to the World Health Organization (WHO).

Most of these deaths occur in Africa, where 250,000 youngsters die from the disease every year.

Malaria is caused by a parasite called Plasmodium, of which five cause malaria.

The Plasmodium parasite is mainly spread by female Anopheles mosquitoes.

When an infected mosquito bites a person, the parasite enters their bloodstream.

These usually appear between a week and 18 days of infection, but can taken up to a year or occasionally even more.

People should seek medical attention immediately if they develop symptoms during or after visiting a malaria-affected area.

Malaria is found in more than 100 countries, including:

A blood test confirms a diagnosis.

In very rare cases, malaria can be spread via blood transfusions.

For the most part, malaria can be avoided by using insect repellent, wearing clothes that cover your limbs and using an insecticide-treated mosquito net.

Untreated, the infection can result in severe anaemia. This occurs when the parasites enter red blood cells, which then rupture and reduce the number of the cells overall.

And cerebral malaria can occur when the small blood vessels in the brain become blocked, leading to seizures, brain damage and even coma.

This occurs when malaria parasites infect a patient’s red blood cells, causing them to rupture, which lowers the overall number of the cells. It is the main cause of death in infected children.

RTS,S, works by causing the immune system to attack the malaria parasite.

Malawi launched the jab today, with Kenya and Ghana following suit over the next few weeks.

These three countries were chosen for an initial trial because they have a high number of malaria cases, despite their strong prevention and vaccination programmes.

The vaccine, which has been 30 years in the making, will be administered in three doses to children aged five-to-nine months old, with the fourth dose being given around their second birthday.

Critics have questioned whether less developed countries will be capable of delivering all four doses, with the final jab being said to be the most important.

The vaccine will be administered as a ‘complementary malaria control tool’, alongside insecticide-treated bed nets, indoor spraying with insecticides, and ‘timely malaria testing and treatment’.

‘Malaria is a constant threat in the African communities where this vaccine will be given,’ Dr Matshidiso Moeti, the WHO’s regional director for Africa, said.

‘The poorest children suffer the most and are at highest risk of death.

‘We know the power of vaccines to prevent killer diseases and reach children, including those who may not have immediate access to the doctors, nurses and health facilities they need to save them when severe illness comes.

‘This is a day to celebrate as we begin to learn more about what this tool can do to change the trajectory of malaria through childhood vaccination.’

The vaccine programme aims to reach around 360,000 children across the three countries every year.

The nations’ ministries of health will determine where exactly it should be given to have the greatest impact.

The jab’s manufacturer GSK is donating up to 10million doses for the pilot project.

‘Delivering the world’s first malaria vaccine will help reduce the burden of one of the most pressing health challenges globally,’ Dr Thomas Breuer, chief medical officer of GSK Vaccines, said.

The non-profit oragnisation PATH is also involved in the programme. Its president and CEO Steve Davis added: ‘We salute WHO and Malawi for their leadership in realising this historic milestone.

‘And we look forward to the start of vaccination in Ghana, and then Kenya later this year.

‘A vaccine for malaria is among many innovations needed to bring an end to this disease, and we proudly stand with all countries and our many partners in progressing towards a malaria-free world.’

Previous: Diabetes drug works better than diet and exercise to keep weight off
Next: Most of the infants die in their sleep
Related posts
Pet Care News